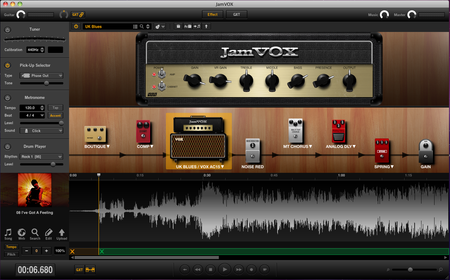 I downloaded the trial version of Vox's JamVOX III software to put it through it's paces.  For those not familiar with the JamVOX, this is a software-only version of what was originally a software package that worked exclusively with Vox's own desktop speaker and computer/guitar interface.  Now that they've ditched the hardware, it's somewhat more flexible.  You'll still need an interface cable to connect your guitar to your computer, but those are easy to come by.  I tested both a Line6 GuitarPort and an IK Media Stealth interface and both worked fine without requiring any special drivers or fiddling.

So what is JamVOX?  In a nutshell, it's amp & effects modeling system that also doubles as a basic guitar recording system and has a number of unique capabilities for guitar players.

Overall JamVOX III appears to be quite an improvement over prior versions. Better usability and much better GXT (guitar extraction technology) for "canceling out" guitar parts from existing songs.  The idea is you can take any MP3 file and with just a bit of fiddling, eliminate the guitar parts (rhythm or lead) that you want so that you can play that part instead.  It's a cool idea, but in earlier versions, there was quite a bit of distortion to the rest of the sounds.  In JamVOX III, the results seem much better.

The guitar tones, amp emulations and effects are a bit disappointing.  They aren't as good as those I've used with Line 6, or my Zoom G3 multi-effects pedal.  But this is somewhat a matter of taste and depends on how much tweaking  you're willing to do.

Here's my first sample, using the Beatles song "I've got a feeling."  In just a few minutes I was able to create a nice classic rock tone and then cancel out the John Lennon rhythm guitar part.  My playing is pretty sloppy, but otherwise you can get a feel for how JamVOX sounds from the video.  JamVOX also has some nice features for automatically changing the GXT settings at different parts of the song. (That's how you can hear the first few bars of the rhythm guitar from the recording, before I start playing.)  JamVOX also lets you shoot video with the backing track, just as I've done below.  (Though it would be nice if there was a count-in feature!)

I must admit that the first time I played along with the JamVOX using the GXT feature to cancel out the rhythm guitar part, it was kind of freaky.  It really does feel like some kind of alternate universe where you get to play with the Beatles or whatever other band you have in mind.  You can still hear the drums, vocals and bass pretty clearly and although I don't really show it in the video, it's a cool feeling.

While not perfect, JamVOX III does a very good job and makes it easy to create backing tracks from just about any song. Your mileage may vary, depending on the complexity of the song and how much effort you put into it.  The ability to share guitar tones and GXT settings online with other JamVOX users could be the killer feature that enables people to dive in and use the product on songs they know and love with a minimum of fuss. JamVOX appears to have a pretty vibrant community of users, but I was unable to test out the library of online settings to see how many songs have received the GXT treatment.

JamVOX III is available for half price (just $49) during the initial launch until May 30.  This seems like a steal for anyone who is looking for a fun way to practice and record.  And the update is free for existing customers.

How's the latency on it? Would it be useable for live purposes?

As much as we love our stomboxes, I think we're all waiting for the day when we can carry less stuff to gigs. :)