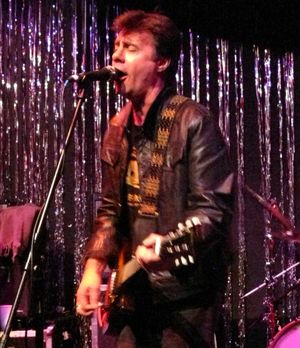 Saw one of the best gigs of my life a few hours ago -- Glen Matlock of the Sex Pistols as well as Hugh Cornwell of the Stranglers.  These were two separate sets, but featured Clem Burke and Steve Fishman on drums and bass for both sets.  Guitar virtuoso James Stevenson also joined Matlock on lead guitar adding great melodies and leads.  I'll post a more detailed review in the coming days, but in short, this was a fantastic evening.

Glen Matlock opened the show with a ton of energy and really set the tone.  He played songs from throughout his career including songs from the Rich Kids (a band that never quite got the fame they deserved) as well as earlier Pistols songs and later solo work.

Hugh Cornwell came on after a short break with an equally intense set that drew heavily from the Stranglers back catalog and also included more recent songs from his solo albums "Hoover Dam" and the soon to be release "Totem & Taboo". The arrangements for the songs were great and really showed what top caliber musicians Clem Burke and Steve Fishman are.  I used my Canon G9 camera so the sound quality should be pretty decent.

I've posted a few videos with more to follow --so check it out!

Also note there are only two remaining shows on this current tour: San Francisco friday and LA Saturday.  This is quite literally a once-in-a-lifetime gig.

I'll follow up with more details, more photos, more videos and an interview with Hugh Cornwell.