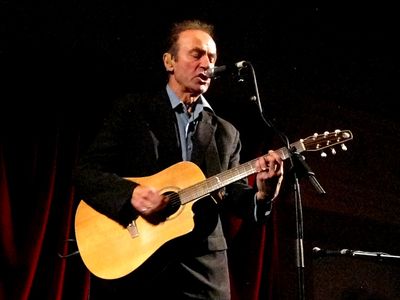 Ex-Stranglers lead singer and song writer Hugh Cornwell performed an acoustic set at Bush Hall, Shepherd's Bush, London last night.  The temperature outside was frigid, but Cornwell heated things up with a repertoire that included a new take on a good many Stranglers classics as well as songs from his solo repertoire.  Cornwell drew heavily from his albums Beyond Elysian Fields, Hoover Dam as well as the forthcoming Totem & Taboo.

It was a great show.  Cornwell's voice is as solid as ever.  Some of the old Stranglers material works well in an acoustic arrangement including "Goodbye Toulouse," "Always the Sun" and even "Hanging Around."  But other songs like "Get a Grip on Yourself" or "Midsummer Night's Dream" fell a bit flat without a full band.  Interesting, but not quite a match for the original.  Still, it's nice to see Cornwell mixing in the classic songs along with his new material.  Perhaps even more significantly, the newer material from Totem & Taboo is absolutely top notch and I'm eager to get the full album once its released.

Update: I've added some more videos from the show.

Also, if you haven't dropped by the official Hugh Cornwell site, this is a good time to stop in and learn how you can make a pledge via PledgeMusic to help with the production of the newest album.