I'm not sure how it's happened but some of the videos I've posted here on GuitarVibe have gotten way more views than I ever expected.  There are now about 600 videos with a total of more than 1.2 million views in total.  The average (2,000 views per video) is not great, but there are some videos of me playing with the Electric Buddha Blues Band that barely have double digit views and so clearly there are other videos pulling in some big numbers.

Some of the concert videos have certainly benefited from fanatical fans and maybe got some prominent blogs or websites to link to them.  However, that doesn't even begin to explain the top 10 rankings.  In the #10 spot is Queen + Paul Rodgers "Feel Like Making Love" live from Latvia with 31,000 views.  Admittedly, the Prime Minister Ivars Godmanis replaced Roger Taylor on drums later in the set and maybe he legislated mandatory YouTube viewings in schools.  Who knows.  It was a good show, but pretty high volume of traffic for something this obscure.

Those numbers put Queen + Paul Rodgers way ahead of more mainstream artists like Aerosmith or Coldplay.  Heck, the Grateful Dead and some great blues artists like BB King, Kenny Wayne Shepherd, Joe Bonamassa are barely cracking 1,000 views, bumping along with local bands like The Blind Pilots.  So there's no accounting for taste.  But it gets weirder.

I don't know how to account for the fact that Lenny Kravitz comes in the #6 position with "American Woman" live from the Oracle conference a few years ago.  I mean, I like the song, but 42,000 views?  Really?  And that concert was so loud it's one of the few videos where my Canon G9 sound gets distorted.  Must be that 70's time machine problem.

Speaking of which, Buffalo Springfield and Pearl Jam w/ Neil Young at The Bridge School Benefit come in positions #4 and #5 with 70,000 and 46,000 views each.  I can understand that given the significance of the Buffalo Springfield reunion after a 40 year absence.  Had I been thinking more clearly, I would have braved the cold and rain for another 30 minutes to shoot the entire set.  (And it came out remarkebly well considering I was shooting off a video screen.) But I'm sure in another 40 years, God willing, they'll do it again.  Maybe by then, Bridge School Benefit will be sufficiently well organized that they can run the concert in less than 6 hours with 30 minute breaks between every set.

Coming in the #3 position AC/DC live from Oracle Arena in 2010 with their song "Big Jack" off their last album.  You knew they released an album in 2010, right?  "Big Jack" is a good song in that it sounds exactly like every other AC/DC song.  I'll save you the trouble of reading the comments posted on YouTube; they all say "I waz there, that show rocked"  or "That crowd sucks." 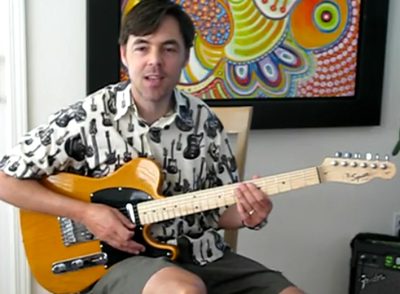 Ok, but now the really weird part.  The top 2 videos (with 111,000 and 88,000 views respectively) are me reviewing some cheapass guitars I own.  I don't know how that's possible.  But there sure are a lot of teenagers who hate my playing, my talking, my amp, my shirt, my haircut and my taste in music.  Luckily they let me know by posting misspelled comments on Youtube.  (Even I'm slightly embarassed by these videos, so no links!)  Yet somehow they've made me more popular than AC/DC.

Angus, Malcolm, I love you guys, but the numbers don't lie... 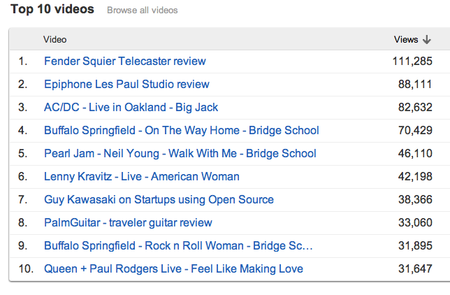 If you want to improve your guitar playing there's no magical device, or instrument or book or course that will suddenly make it all happen.  Bu there are two sure fire things that will accelerate your development:

I've written previously about the notion of guitar mastery and how to get more time to play every day.  For the last three years, I've played guitar about 360 out of 365 days a year.  Sometimes it's 15 minutes at the end of a very long day.  On occasion its in an airport or hotel with a travel guitar.  But it's not when I feel like it or when I have time; it's an every day commitment.  That's helped me get a lot of the basics down.  Today I'll focus on the importance of playing with others.

Two years I started playing guitar with a blues workshop at Red House studios in Walnut Creek.  Every Monday we get together and work on blues songs.  We've had some people come and go from the workshop, we've split up into two different bands, we've tackled classic blues as well as some rock songs that really have nothing to do with the blues (mostly my fault).  But the important thing is we play together as a band.  There's a drummer, a bass player and usually more guitars than we actually need.  And we don't just jam or fool around; we work on songs that we'll perform live in front of an audience.

I've also been getting together every few fridays with my buddy Rob for the last 10 months and occasionally we've been lucky enough to have Chorus Dave join us on bass as part of the Electric Buddha Blues Band.  Rumor has it in 2012 we'll get a drummer.

There's something important that happens when you play with others.  It forces you to improve in ways that are more difficult, perhaps even impossible, on your own.  You can't really develop the skill of listening to others by playing by yourself.  With the right coaching from fellow musicians you learn how to not overcrowd others, how to leave quiet stretches, how to bring down the dynamics and how to deal gracefully when things go wrong.

If you want to really improve your playing, I encourage you to find a couple of like-minded wannabe musicians and just get going.  As long as someone can hold down the beat, you're guaranteed to improve.  And if you're very fortunate, you'll actually create music and friendships along the way.

Below is a video of me, Rob and Chorus Dave doing an Albert King song "I'll Play The Blues For You." 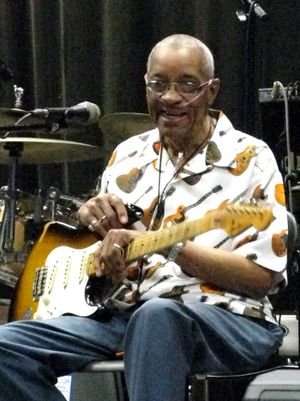 Blues legend Hubert Sumlin passed away a few weeks back at the age of 80.  He played with Howlin' Wolf in Chicago for 20 years and is considered one of the most influential blues guitarists.  Sumlin was listed as #43 in the Rolling Stone list of the 100 Greatest Guitarists of all time.  Sumlin was also an influence on a generation of guitar players including Jimi Hendrix, Eric Clapton, Keith Richards, Jimmy Page, Stevie Ray Vaughan and others.  He went on to record and play for another 35 years releasing has award-winning album "About Them Shoes

I saw Sumlin play a couple of years ago at the National Guitar Workshop in Austin, Texas alongside Muddy Waters' guitarist "steady rollin'" Bob Margolin.  In a somewhat ramblin story, Sumlin described getting fired by Howlin' Wolf for his reliance on using a pick.  This motivated Sumlin to learn to play in the finger picking style that would make him famous and rejoin Howlin' Wolf a short time later.

Sumlin was also featured in Kenny Wayne's Shepherd's "10 Days Out 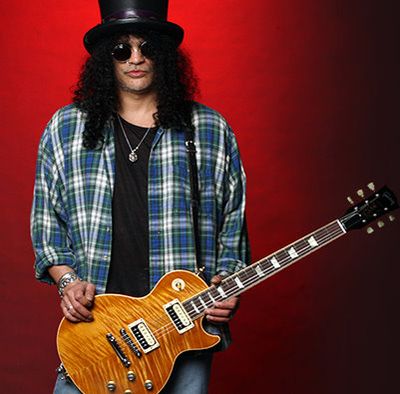 This is a guest post from GnR fan and guitar enthusiast Steven Williams from England.

The Slash 'Appetite for Destruction' Les Paul absolute beauty is not just a guitar; it’s a limited edition piece of history. There are only 100 in the world of these perfectly crafted instruments, which not only look amazing, but sound amazing too. Well Slash wouldn’t settle for anything less would he?

Only the finest materials make up this Gibson Les Paul guitar with a Grade AAA maple top and weight-relieved mahogany body, it is then coated in nitrocellulose laquer that replicates a faded vintage Les Paul Standard. But don’t forget it has to sound as good as it looks so the maple-mahogany combination and thin nitro finish help to get the most out of them in terms of looks and sound.

The neck and a headstock are shaped in the classic tradition of the 1958-’60 Les Pauls, which is always a good thing. Crafted from quarter-sawn mahogany and topped with a rosewood fingerboard. Gibson’s lauded 17-degree back-angled headstock is incorporated which adds to the guitars resonance and sustain.

To Slash’s personal specifications, the Appetite for Destruction Les Paul has a set of Seymour Duncan Signature Series Alnico II Pro Slash humbucking pickups, which are crafted in the image of the original Gibson PAF humbucking pickups. But the range in tonal versatility is the truly impressive feature from a rich throaty wail at the neck to a muscular roar at the bridge, which we come to expect from the Les Paul. This is then transmitted via a Switchcraft selector switch, high-quality potentiometers with Orange Drop tone caps, and a robust Switchcraft output jack.

In the image of the Les Paul Standards of the 1958-’60 the Slash Appetite for Destruction Les Paul has a classic set of hardware. All suited to Slash’s very high standards. A TonePros Tune-o-matic bridge and stopbar tailpiece offer uncompromising resonant coupling between strings and body, while a set of Kluson-style tuners combine an authentic vintage appearance with the performance of modern guitars.

As you can probably imagine the signed Appetite for Destruction model doesn’t come cheap at around £10,000 (around $14,000 USD) or half that for the VOS (vintage original spec) version.  But given the rarity of this instrument, it's value will likely increase with time; it’s not just a guitar it’s a piece of art hand signed by a rock legend. If there’s anything worth buying as a collector’s item then this is it. However if you are brave enough to take it out of the glass case and play it, then it really is something special. Whether it’s worth the money is your decision but what better way to cure the dreaded mid-life crisis --and it's slightly cheaper than that Ducati you've been thinking about.

Steven Williams works at Dawson's, a fine musical instrument store in Warrington, Cheshire, England.  If you're in the area and want to get your paws on the Slash signature Les Paul or any other fine gear they have on offer.  Thanks Steve!