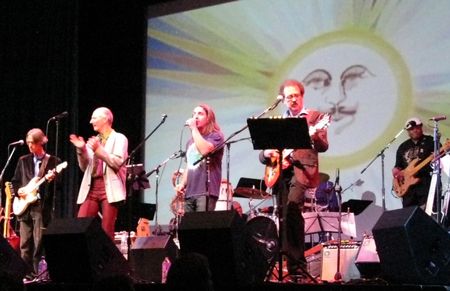 The White Album Ensemble has become famous in the San Francisco bay area, having been founded in 2003 by ex-Doobie Brothers multi-instrumentalist Dale Ockerman and bass player Tiran Porter.  They've also nurtured local Santa Cruz talent, including James Durbin, who went on to American Idol fame.  Durbin even joined his former band mates on stage for an encore Thursday evening.

To be fair, it's impossible to live up to the legend of the Beatles during their 1966-1970 studio era.  They moved beyond the Mersey sound and created step by step a blueprint that was much about music as it was about ideas.  They literally invented the psychadelic sound by turning the recording studio into an instrument with multi-track recordings, tape loops, layered harmonies.  And they wrote the most beautiful, timeless songs ever: "Eleanor Rigby", "Taxman", "She Said, She Said", "Here, There, Everywhere", "Tomorrow Never Knows".  That's just from 1966's "Revolver".  In 1967 they raised the bar with "Sgt Pepper's Lonely Hearts Club Band" with such songs as "A Little Help from My Friends", "She's Leaving Home", "Within You Without You", "When I'm 64" and the finale, "A Day In the Life", arguably one of the greatest song ever written.

That's not to say that every song the Beatles wrote was perfect; the "White Album" in particular has its share of songs that I'd be happy to never hear again.  But it also brought "Back in the USSR", "Glass Onion", "While My Guitar Gently Weeps", "Happiness is a Warm Gun", "Blackbird", "Birthday", "Revolution", and "Savoy Truffle" to name a few.  Could any band ever be this good?  Could any band live up to the expectations of a live Beatles concert?  No, not hardly.

But still.  It's a worthy effort and the White Album Ensemble approaches the material with a love and reverence of the Beatles music that is obvious and endearing.  It's truly a feat of epic proportions: note-for-note renditions of entire Beatles albums (plus a couple of singles) with all of the instruments and arrangements captured precisely, from the to the sitar of "Within You Without You" to the harp of "She's Leaving", the oboe of "When I'm 64" and the crazy orchestrated layers of "I am the Walrus".  Every note is played live using real instruments.

It's hard even to conceive of how much time must go into perfecting these arrangements. As good as the arrangements are, the vocals remain a tribute.  Newcomer Omar Spence, son of Moby Grape founder Skip Spence, sings with an uncanny resemblance to John Lennon.  Richard Briant who sings Paul McCartney's parts does an admirable job and has a fantastic range, but no, he doesn't sound 100% like Sir Paul did when he was 25.  Ken Craft does a great job on George Harrison's vocals and does some brilliant guitar work.  Could anyone capture the unique timbre of Ringo Starr?  Doubtful.

Despite that, when you put it all together, it works remarkebly well.  Even if you're not a die hard Beatle fan, you can't help but walk out in amazement at the complexity and sophistication of these songs as well as the dedication of the musicians who put this together.  If you get a chance to see them live, you won't regret it.  In the meantime, I've posted some video on YouTube.

Update: I've now posted videos from both nights below. 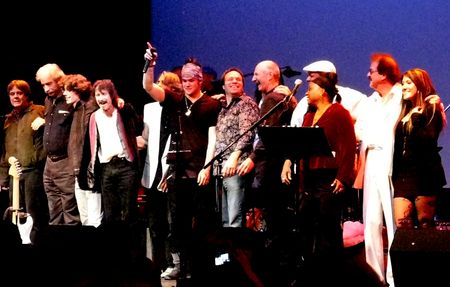 Durbin joined the band for an encore of two songs: "A Little Help from My Friends" and "While My Guitar Gently Weeps."   Great to see Durbin taking time out of his schedule for an end of year concert.  And as Durbin mentioned on stage, he's getting married in 2 days to his fiancée, Heidi, to whom he proposed to 3 years earlier after a White Album Ensemble concert.  I managed to get both songs on video.  I apologize in advance that some of video is a bit overexposed, but the sound quality is good.

I'll post more videos from the rest of both shows on the weekend.

A couple years back, the good folks over at Line 6 posted some excellent tabs and backing tracks files for the holiday season with Silent Night, Deck the Halls, Greensleeves and more in Blues, Country and Rock versions.  These are mong the best holiday tabs and backing tracks you can find.  And they're the perfect excuse to get more time playing guitar over the holidays.  "Honey, I'm practicing Silent Night. For the kids, ya know."  Clever marketing and much appreciated.  And this is on top of the great free lessons with Wolf Marshall.

The MP3 backing tracks include full versions as well as backing versions without the lead.  My faves are the rock versions.  Turn up the reverb and prepare for your holiday stadium gig.  And there's still time to pick up a nice Pocket Pod or TonePort from Amazon for the holidays.  Merry Christmas guys!

Behind the Scenes at Lapstick 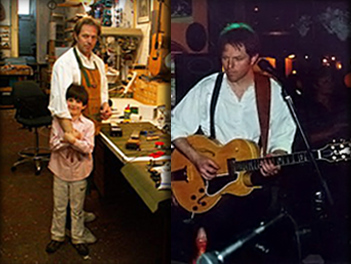 A couple of years back, I posted a write up and interview with Phil Neal, creator of the Lapstick travel guitar.  Here's a great video Phil has posted that talks about his background and how it led to the creation of the Lapstick, the most compact travel guitar ever.  Also some great scenes of Phil in his workshop working on various classic guitars.  The video is in dutch with English subtitles.

Hopefully, we'll also eventually see other variations on the Lapstick, including the long-rumored medium-scale version.  I'd love to have a Lapstick with a 22" scale, but I'm not sure Phil agrees.

When George Harrison was inducted as a solo artist into the Rock & Roll Hall of fame in 2004, there was a blistering rendition of "While My Guitar Gently Weeps" featuring Tom Petty, Jeff Lynne, Dhani Harrison and Prince.  Prince comes in at 3:30 for an incredible guitar solo.  Watch it to the end and see if you can figure out what happens to his guitar.  Incredible showmanship.