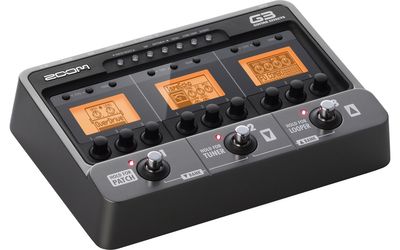 Next on my list of recent purchases is the Zoom G3 mult-effects pedal.  This replaces my Line 6 JM4 Looper.  While it's in no way a substitute for all the fancy backing tracks of the JM4, I found I wasn't really using those capabilities.  And adding new backing tracks to the SD card was a pain in the neck on the JM4, at least compared to the Boss Micro BR-80.

The idea of the G3 is simple: stomp box ease-of-use with multi-effects sophistication all for $200.  It looks like 3 old school stomp boxes stuck together in a durable gun-metal enclosure.  You've got 3 simple on/off buttons, one for each effect, as well as 3 knobs for each effect so can dial various parameters such as gain, delay etc.  Each stomp box can control any of the more than 100 built-in amps or effect simulations.  Hold down the left button and you can cycle through 10 banks of 10 preset sounds, some of which are classic sounds (like SRV, Surf Rock, US Blues, Marshall stack) some are weird and some are completely useless, as is the case with any modeling system.  Hold down the middle button and you get the built-in tuner.  Hold down the right button and you get the looper.  It's dead easy to operate and the LCD panels are bright and easy to read.  You can click on the image below to expand it. 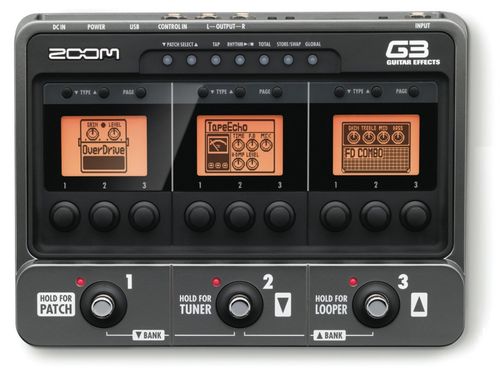 Typically you'll have the left-most pedal set to an overdrive, distortion or boost pedal, the middle to use a reverb, delay or chorus and the right-most pedal to one of 13 amps (Fender Twin Reverb, Fender Tweed, Marshall, Vox, HiWatt, Mesa-Boogie, Two Rock, Matchless, Orange, etc).  There are more than 90 guitar effects to chose from with oodles of overdrive, distortion, compressor, acoustic simulator, vibrato, flanger, phaser, auto-wah, chorus and delay models that you can set in just about any crazy way you want.  There are only a few limitations based on the amount of processing required for some effects.  There are seven twin effects that combined two common settings such as chorus/delay, compressor/overdrive, reverb/delay; which offers a decent workaround when you need to cram in one more effect.

The looper provides a 40 second looping capability and you can summon 40 basic drum tracks for Rock, Blues Shuffle, Balad, Metal, Punk, Thrash, Funk, Latin, Jazz, Pop etc.  They cover the basics but I would have liked to have had a few more variations on Rock and Blues and a few less for Dance and Metro. (Come on guys, who do you think your target market is?)

Unlike a lot of complicated loopers, the Zoom G3 is very easy to use.  When you have any of the backing rhythm  tracks going (including a basic metronome beat) the G3 is smart about starting and stopping loops on the beat.  This is great for someone like me who is rhythmically challenged.  Generally speaking, I can get the looping right 90% of the time, which is a big time saver compared to other pedals I've tried.  Jamming over loops with so many different effects to choose from can be a real blast.

While this is totally subjective, I found the quality of the amp and effects modeling of the G3 to be better than my old Line 6 JM4 Looper, Fender G-DEC amp, Korg Pandora PX5D or even my new Boss Micro BR-80.  That said, this is a constantly evolving market and I have not tested Line 6's recently updated HD pod.  But for basic blues and rock, this sounds and feels like the real deal.  In addition, it's a rugged unit that is both sturdy and easy enough to use in a live gig situation.

The G3 runs on AA batteries and also includes an AC power adapter.  And it can operate as a USB interface to any digital recording software.  For $200 street price this is a great value multi-effects pedal with awesome sounds and a lot of extras built-right in. 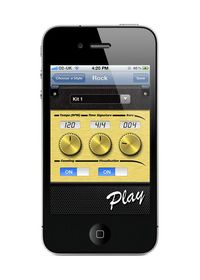 This is a new application available on the iphone by Matthew Benney.  Finally a great set of drum tracks for guitar players.  You've got a range of styles (Rock, Blues, Reggae, Metal, Country...) as well as different times (4/4, 3/4 etc) and speeds.  Think of this as the best most fun metronome application you've ever had.  If you get bored with a standard metronome, this will get you more energized!

The only limitations to BackBeats are those inherent to any iPhone music app.  And that is, you can't have BackBeats playing it's drum tracks in the background while using a separate iPhone app such as AmpKit or Amplitube as your guitar modeling application.

The long and short of that means that as useful as BackBeats is, you still need some other way to amplify your guitar.  If your amplifier has an input jack for an MP3 player, then that's a great solution.  Otherwise, I'm hoping that Matthew Benney can figure out a way to make his application play in the background.  Still, for under a buck, this is a great application and if you play guitar or bass, you should pick it up. 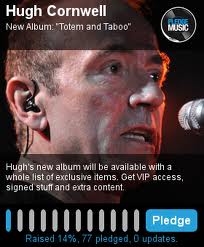 Hugh Cornwell, ex-Stranglers front-man, will be heading into the studio in December to record a new album called "Totem and Taboo".  The album is being published by PledgeMusic which means you can sign up now to pledge money to help defray the studio costs.  For as little as £8 you'll get a digital download.  Or you can pledge a little more and get a lot more.  The options range from autographed CDs to VIP tour passes.  There's even an option to have Hugh Cornwell play a private gig at your house.  I am seriously considering doing this.

There are about 2 weeks left with little over half the cost raised so far.  This is a great opportunity to be part of Hugh Cornwell's latest efforts.  If it's half as good as 2008's "Hoover Dam" it'll be one of the best rock albums of 2012.  You can also download "Hoover Dam" free from the official Hugh Cornwell site at the links below. 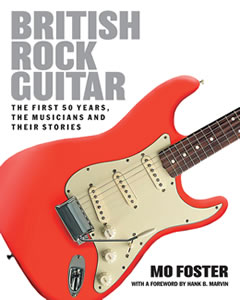