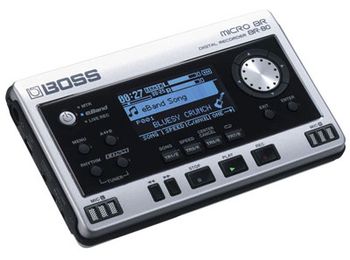 Lately I've sold off a few less-used pieces of guitar equipment and bought some fancy new gear.  The first among these is the Boss Micro BR-80, technically known as the Boss Micro BR BR-80, presumably brought to you by Boss's department of redundancy department.  At any rate, the BR-80 replaces my trusty Korg Pandora PX5D.  The Pandora was a great unit and I loved it, but after a couple of years using the PX5D and it's predecssor, I was itching for something different.

The Boss Micro BR-80 is similar in many respects:

Where the Boss Micro BR-80 excels is:

Personally, I find the COSM modeling of guitars, effects and amps to be better than the PX5D.  You've got your basic amps (Fender Tweed, Blackface, Vox, Marshall), effects (Distortion, Overdrive, Delay, Chorus...) and dozens of presets.  Of course, this is just a personal preference and it greatly depends on the effects you use.  But the basic Rock and Blues settings are quite good and somewhat easier to tweak than the PX5D.  That said, you can easily spend hours fiddling with the effects rather than playing.  So best to pick a few settings add them to the user settings and get playing.

In addition, having the eBand capabilities and built-in jam tracks is great for practicing.  Some of the loops are quite short (a mere 40 seconds captures pretty much any 12 bar blues) and they are not as sophisticated as Line 6's JM4 Looper's "infinite Jams."  But they are decent and Boss has made a library of backing tracks available on their site.  More importantly, you can add your own backing tracks as MP3 or WAV files.  So if you've got a library of backing tracks from instructional books or CDs, this is great way to take them with you wherever you go.

The Micro BR-80 also includes the eBand's "center cancel" technology that enables you to reduce the guitar and vocal tracks from standard MP3 files to create your own backing tracks.  While that sounds good in theory, I've found that the results are much less impressive.  You can eliminate some mid-range or high-frequency sound that might come from a solo, but you also lose a lot of the overall sound.  You can customize how this works to focus on left, center or right, or certain frequencies or depth, but the quality depends on just how isolated the sound is that you're trying to eliminate.  If it's a solo in the left channel at a high frequency, you have a good shot at it. But if you're trying to eliminate the rhythm guitar, it'll be much less effective.

I haven't even tapped into the live recording or multi-track capabilities yet.  But even without those, I consider the Micro BR-80 to be a great device.  It's small enough to fit into any gig bag and easy enough to use that you don't need the manual.  Most of the time.

If you're looking for a portable device for guitar effects and backing tracks, I recommend the Boss Micro BR-80.  For around $300 street price it's not the cheapest device out there, but it's got some built-in capabilities that give it a lot of versatility. 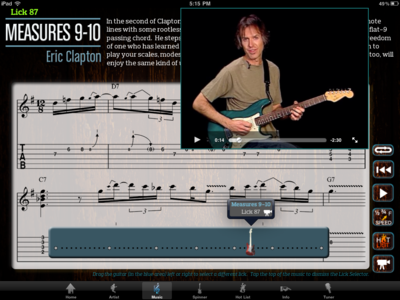 Cherry Lane publishing has jumped into the iPad app business with an awesome Blues Master application created by G-Men Productions.  There are two versions: the Free Blues Masters app which includes a dozen licks from 8 top-notch blues players (Stevie Ray Vaughan, BB King, Albert King, Eric Clapton among others) and the $9.99 paid version that includes 16 artists and over 100 licks.

Of all the guitar applications I've seen, this one has the highest production value.  Cherry Lane has really done a great job using the iPad interface to showcase the artists and then show off the licks.  You get the lick with a backing track, video (in some cases) and a tablature that animates.  Well, not exactly Guitar Pro style animation, but it does a pretty good job showing you where you are when the lick is being played.  Since all the licks are in the key of G you can mix and match to put together some interesting styles.

The free application is a great introduction to the full-blown app and it's useful in its own right.  Even if you're just starting out with the blues, you'll find some useful licks here that you can easily put into practice.

My only beef (and it's really quite minor) is that for beginning players it would be useful to provide some basic information about the key (G), and what Pentatonic shapes are being used.  It would also be nice to have some options to transpose the licks into other keys.  Still, that's not much of a knock on a great application.

As much as I love the TrueFire 50 Licks series of iPad applications, Cherry Lane has just raised the bar.