It was a sad day in February when I heard on the radio that blues guitarist Gary Moore passed away.  I discovered his talent only in recent years and regret that I never got to see him perform live.  Moore was one of the moust soulful blues rock players ever his passing was a tremendous loss to the world of music.

Fortunately, there's a newly issued live DVD and CD available commemorating Moore's performance at the Montreux Jazz Festival last year.  The DVD is issued by Eagle Rock and shows off the full range of Moore's talents.  There are three new rock songs making this one of the edgier performances I've seen.  Moore shreds with a force that's reminiscent of his early career in Thin Lizzy.  But there's enough of Moore's classic soaring blues to satisfy longtime fans.  And there are several explosive celtic-rock songs including "Over the Hills and Far Away" and "Blood of Emeralds" that show what a great performer Moore was.

Here's a video excerpt of a slow burning blues number "Where Are You Now?"

As a bonus for Gary Moore fans, the DVD includes a never-before released four song set from Moore's 1997 Montreux appearance including the hits "Oh Pretty Woman," "Still Got the Blues" and "Walking by Myself."

This is great music.  For any Gary Moore fan or for anyone who's looking for an introduction to this blues master.  I can only hope that there will be more reissues from Moore's past performances at Montreux. 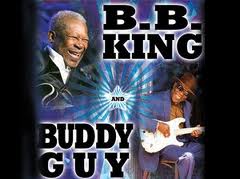 Honestly, I should have been paying more attention.  I should have bought 2 tickets to see BB King and Buddy Guy at the San Francisco Nob Hill Masonic Hall September 26 a long time ago.  I saw both of them play in 2009 and they were great.  At 83, I honestly wonder how much longer BB King's gonna be around.

So if you have reserved floor tickets that you can't use, let me know and I'll take 'em off your hands.  Leave a comment below or send email to ZUrlocker at hot mail, or tweet me at @ZUrlocker.  No scalpers, please.

In return, I promise to shoot some photos and videos that I'll post here.

A while back I posted a quick review of Truefire's 50 Blues Guitar Licks app for the iPad.  If you haven't picked it up, you really should.  For $5.00 that's 10 cents a lick.  Even if you just learn 10 things from this application it's a steal.

TrueFire's not stupid.  They know that if you test out this application and enjoy it, you'll come back and buy other applications also.  They've also released several more "50 Licks" applications of the iPad including Blues Rock, Rock Guitar, Jazz, Shred, Country, Metal, Funk.  I've picked up several of these, and they are all terrific.  These aren't just crappy ports of their Mac/Window versions either.  They are nicely set up on the iPad and make the best of the iPad scree to show the video and tab on screen at the same time.

Preston Reed is  a crazy bad-assed guitar player who lives in Scotland.  He's currently touring in England and at the end of September will be heading to the US for a west coast tour hitting Portland, Eugene, Santa Barbara, Santa Clara, Redwood City, Oakland and just about every major guitar-friendly venue in between.

Check out the crazy video below.

Checkout the links for more information.

On my trip last month to Austin for the National Guitar Workshop, I was lucky enough to see Jimmie Vaughan perform at Antones.  While I had been lukewarm on Vaughan last time I saw him, this show was fantastic.  Here are some videos shot with my trusty Canon G9. Great audio, as usual.  I'll post some photos from the gig in a few days.

If you want to check out some of my other concert photos or videos, checkout www.guitarvibe.com/gigs