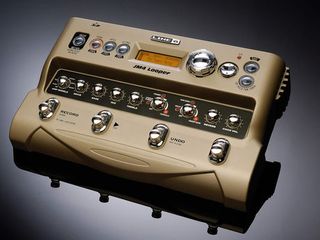 I picked up a Line 6 JM4 Looper

pedal recently.  In effect, this is the "brains" of Line 6's Spider Jam amp in a 5 pound package without the amp, speaker and cabinet.   The whole thing measures about 12" x 7" x 2.5", or about the size of four single-purpose effects pedals.

If you're looking for a simple gig-ready looper pedal to lay down some rhythm guitar and then play some riffs on top of it, the JM4 Looper may or may not be the right thing.  But if you'd like to make things more interesting with drums, backing tracks, built-in amp models and effects, then the JM4 Looper has a lot going for it.

There are 350 (!) different pre-set tones covering an even broader range of songs, artists and styles.  Want the exact tone for Steely Dan's "Kid Charlemagne" solo? It's there.  Pink Floyd "Another Brick in the Wall" solo?  Check.  AC/DC's "Back in Black?"  Got it.  Ozzy Osbourne's "Barking at the Moon"?  Hey, there are three different tones for that one.  There are so many tones built in here it can be pretty overwhelming: Joe Satriana, Albert Collins, The Police, ZZ Top, Dire Straits, Guns 'n' Roses, Santana, Stevie Ray Vaughn, Rush, White Stripes, Maroon 5, Slipknot, to name a few.  The tones are organized into different banks (for various eras, artist styles etc) but it can still take a while to go through all the choices.

But the real power of the JM4 Looper is the backing tracks.  There are around 100 jam tracks in various styles (rock, blues, metal, country, jazz).  Admittedly, with so many choices in both backing tracks and tones, you may never use all of them.  But with the approach Line 6 has taken there's something for everyone.

There are great blues tracks, metal songs, country jams, stadium rockers and more.  Because these are recorded by professional session musicians, even songs outside your favorite genre have an energy and sound to them that makes it easy to play along.  There's also an "endless jam" capability that makes it easy to jam to the songs without it feeling completely repetitious.  And you can speed up or slow down the tracks or modify the key.  However, when you do, the audio distorts a bit.  So if you want to change something from the key of E to F, that's ok.  But if moving it more than two half steps, the percussion starts to sound very artificial.  So you're probably just better off learning how to play these songs in the proper key.

Recording and practicing to the backing tracks is dead easy.  You select a backing track using the Songs button, or if you want it bare bones, just select the Drums button.  Rotating the big dial button lets you scroll through the choices of songs or drum tracks.  The JM4 Looper will automatically dial in an appropriate tone.   Then click the record button and you'll get a 4 beat countdown to start.  You can record multiple layers or, as I often need to, hit the "undo" button to start again from a clean slate.  To transfer the song to your PC, press the save button and then select "Mix down to WAV file" option.  You can then use iTunes or other programs to compress the WAV file into a standard MP3 file.

If you click on the MP3 link below, you'll hear a backing track of "The Thrill is Gone" in Bm with some simple Pentatonic solo riffs. I've also experimented a bit with some of the delay capabilities, though honestly I don't think I did the effects justice.  Still you can get a sense of the quality of the backing tracks and the built-in tones.

The Thrill is Gone (MP3)

I also recorded a riff from the Metal Method instructional DVDs with more of a hard rock feel to it.  In this case, I played a simple rhythm part (G7, C7, D7) over a built-in 70's Groove drum track and then dialed up the Laguna Coil - Pizza  solo tone and hit record.  The solo uses the G Minor Pentatonic scale.

Note: Some readers have had trouble with the embedded MP3 player above.  You can also click on links to the MP3 files The Thrill is Gone or Metal Method Riff directly to open them in a new window or right click save them to your computer.  Also, for some reason, the Metal Method Riff recording has a lot of pops and clicks. I'm trying to figure out the problem on this...

While the JM4 Looper is cheaper than the full-blown Spider Jam amp, it's a significant investment.  The street price is typically $330, though you can occasionally find it for less.  Still, right now, this is the best device there is when it comes to providing a combination of high-quality jam tracks, built-in effects and tones and easy recording capabilities.  And not only is it a blast to use, but the more you use it, the better you'll play.

Looks like a great practice tool! Your solo is great! I can hear that B.B. vibe!

Hey, that unit looks awesome! I might have to check it out, although I do have a Digitech JamMan already.

I've got the Pod HD300 which also has some awesome tones but not the backing tracks. Do you know how the JM4 compares to the HD300?