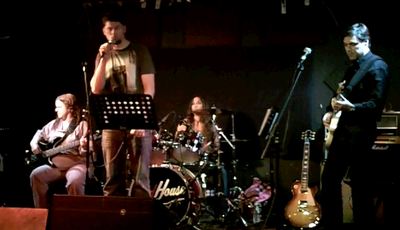 Apologies that it's taken me a while to post this write up on last month's blues gig.  Somehow the videos were hard to get hold of and some of the footage shot on iPhone rather than my usual Canon G9 left something to be desired.  Nonetheless, I've posted video of most of the songs.  (We had one near train wreck, which no one in the group wanted to see again.)

The gig was heled at Red House studios in Walnut Creek, where we practice on Monday evenings in a Blues workshop.  I think everyone was less nervous this time, but still a few things went awry.  In some ways it was a miracle that we even pulled off the gig as we had one person recovering from surgery and two others who earlier in the day were borderline as to whether they would be able to make it at all due to respitory ailments.  For reasons I cannot fully explain, we substituted one song about 20 minutes before going on stage.  In retrospect, that might not have been the best idea, since we had not played it together in many months.

Nonetheless most of the gig worked out well.  We started with the 1977 Stranglers song "Hanging Around" which is about as far away from the blues as you can get.  Although the video doesn't show our awesome intro, it does a pretty good job capturing the energy of this song, especially the tremendous drums & bass from "the rhythm chicks" Holly & Lynn.  I'm singing vocals (occasionally off-key), James does a fantastic solo, and we started and ended together, so that was pretty cool.  I was more relaxed for my solo than the last gig, though I should have had more volume, as usual.

I played on a few other songs ("Shakin' All Over," "Hoochie Coochie Man," "Ain't no Sunshine") but to me the standout songs were "Messin' with the Kid," "Hurt so Bad," and "Juke Joint Jump," the latter featuring our ever-inspiring blues instructor Jeff Magidson.

It's been fantastic to play with so many awesome musicians: Lisa is phenomenal on vocals (and guitar), Val is a brilliant guitar player, James is a superb showman, Tom has made major strides in the last few months.  Best of all, the whole crew are great to work with.  There's no doubt that playing at Redhouse has helped me improve my own abilities.  I don't know when our next gig will be, but we will continue to make progress gradually, week after week, gig after gig.

You guys did great on your last gig! Want to see you perform live. I am also interested learning a little electric guitar lessons from Val your guitarist.