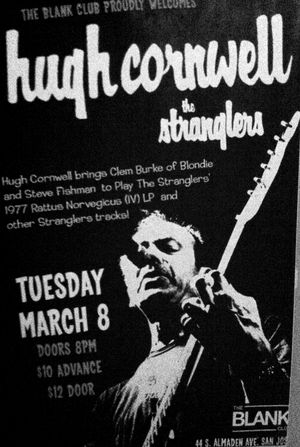 Hugh Cornwell, former Stranglers front man, played a gig in San Jose this evening on the current leg of his North American tour.  If you're a Stranglers fan, this show is not to be missed.  Cornwell's vocals are as strong as they were in 1977.  For me, the show was incredible.  I felt like I'd waited 20 years to see this gig.  The set started with "Nice n Sleazy" and went on to include songs from Cornwell's recent solo albums ("Going to the City," "Black Hair, Black Eyes, Black Suit") as well as a tremendous selection of Stranglers hits such as "Golden Brown," "Always the Sun," "No Mercy," "No More Heroes."  The second set was the entire Stranglers first album Rattus Norvegicus

including my favorite song "Hanging Around."

I've uploaded a few of the videos from my Canon G9 to YouTube..  Unfortunately, the batteries ran out about 3 songs into the first set.  The rest I managed to shoot with the iPhone 4.  While the iPhone video quality is not perfect, it does a pretty decent job with the audio.

I'll provide a more detailed write up in the next few days.  Note you can download Hugh's latest album Hoover Dam completely free of charge.  Or check out Cornwell's live CD Dirty Dozen.

Update: I've added the rest of the videos and they came out decent, all things considered.  Vocals got a bit drowned out on occasion and the bass doesn't come through as loud as I would like on the iPhone songs, but I think you can get a pretty good feel for the show.

I was informed late. I was not able to attend the attend it.