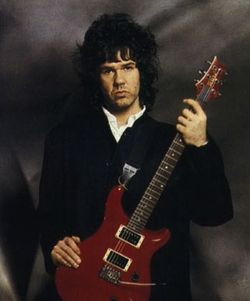 Irish rock guitarist Gary Moore died this weekend at 58, in Spain.  Belfast-born Moore first picked up a guitar at the age of eight and began his career in Dublin at the age of 16.  Moore met Phil Lynot in Dublin and had an on-and-off part in Lynot's band Thin Lizzy, playing with them for 4 years including his appearance on their most famous album "Black Rose."  Moore released more than 20 solo albums during his 42 year career, playing with such legends as Jack Bruce, Ginger Baker, George Harrison, Bob Dylan and others.  Moore was noted for his powerful yet soulful style of blues, picking up where players such as Jimi Hendrix and Peter Green left off.

His Best of the Blues is one of his most memorable albums, featuring collaborations with Albert King,  B.B. King  and others.   Here's a link to a live version of Moore playing with BB King on "The Thrill is Gone" on YouTube below.

Gary Moore was one of the legends of the electric guitar.  His impact on rock and blues cannot be underestimated.  I'm sorry that I never got to see him play live.

Rip Gary, thoughts with your family!

RIP Gary Moore, we will miss you and your music.