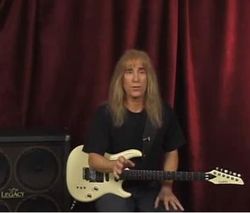 I'm pleased to present a classic interview with Doug Marks, the man who has taught millions how to play rock guitar with his unique Metal Method DVD Course.  Doug was a working musician in the Los Angeles metal band Hawk and brought rock guitar instruction out of the stone age along with his combination of practical techniques, inspirational riffs and big hair.  Even though the name is Metal Method, the course is really about classic rock and these techniques are applicable to rock, metal, blues or just about any popular guitar music.

Q. How did you get started with Metal Method?

Doug: I was giving private guitar lessons in Denver, Colorado. My ex-wife and I decided to move to Southern California. Before leaving my fifty students behind I chose to sell them copies of my tab. I believe that I made about $800 which helped us get to California. After I was in California I put together some additional information and sold it to my students back in Denver. Before long I decided to write an entire course and advertise it in guitar and fan magazines. I sold two vintage Fender Strats and used the money to purchase my first magazine ads. The course was successful from the beginning and has remained so for the past twenty-six years.

Q. The course has gone through several major evolutions, from the original cassettes, to VHS and now to DVD. What's changed and what's stayed the same over the years? 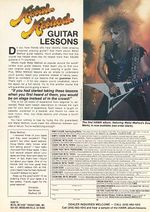 Doug: It sure is easier to teach when your students can actually see your performance. So, moving from audio to video was a huge improvement. The DVD has been another major leap forward along with video editing software that allows me to edit my programs personally.

DVDs offer a higher quality picture than VHS tapes and are menu driven so my students can find the exact information they need quickly. Students can also instantly review material. We also store the booklets and play-along animated tab on the DVDs which can be downloaded to a personal computer. So, the biggest improvement to my guitar lessons is the technology that we’re able to access today.

Q. Often people assume you need to be a "natural" to play guitar. Was that your experience? How did you learn guitar?

Doug: My experience was quite the opposite. I started playing guitar before tab became popular and before the Internet and the wealth of information that it provides. I also lived in a small town so it was difficult finding an instructor. I struggled for years before I was even an intermediate player. Learning guitar was difficult for me so I understand my student’s struggles better than if I had been a "natural" player. If someone has "natural" ability, it’s difficult for them to explain the process to others.

Over the years I’ve decided that a "natural" player is simply someone that has a natural curiosity about guitar and they’re motivated by the process of satisfying that curiosity. They love to play so they play more often and with more enthusiasm than someone that approaches guitar with a different mindset, "I know that I have to practice scales today even though I don’t enjoy playing scales." 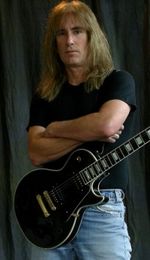 Q. How has the internet changed the music business and what kind of impact has it had on your own company?

Doug: The Internet has given many artists exposure that otherwise would have never received any attention. I guess the downside is, most of those artists wouldn’t have received attention for a pretty good reason and the attention that they’re receiving is very small.

Do to copyright infringement (illegal downloads) less people pay for music than in the past so record companies are less likely to invest in new bands and finance expensive recording situations. My guess is, without the Internet there would be more high quality recordings than there are today because the market would support that.

Overall, the Internet has made my company more efficient. People order online, we download their order and process it. That’s a lot easier than the mail order business we used to run and the 24 hour answering service we had to pay for. The Internet provides a lot of free exposure which is great. On the other hand there’s a lot of free information on the Internet that we’re competing with. When I first started Metal Method there were less than half a dozen companies competing in this business. Now there are probably thousands. Competition is good but there’s a lot of crap out there and it’s difficult for people to know which way to turn.

Some people don’t want to pay for lessons so they endlessly search the Internet for information. The problem is, they end up with big holes in there knowledge because they’re not studying a comprehensive course that takes them from A to Z. Using the alphabet analogy, they’re missing a lot of the letters and they have no idea which ones. Experienced players are often surprised to study my Stage One lesson, for example, and find that they learn a few things from the basic lessons. So, free lessons can be pretty expensive if you’re not making the progress you expect.

Q. It seems like there's a real sense of community among Metal Method students. How did the online forums come about? 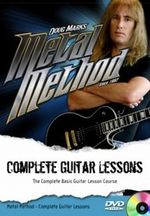 Doug: You’re right, we have a great online community on the Metal Method Forum. We have several dedicated moderators that keep the process running smoothly. I appreciate their efforts because the forum couldn’t exist without them. It would be too big a headache for me to oversee.

I’ve had a forum on Metal Method’s website almost the entire time that we’ve had an Internet presence. I believe that our first forum was in 1997. I’m a technology geek so I usually have an awareness of new technology. The forum is a natural extension of the website because it helps me interact with students. Plus, they create content which is necessary for a website to remain interesting and relative.

Q. What do you think of some of the computer software that's out there today for creating drum tracks, recording etc? Do you think those are useful tools for newcomers?

Doug: I love that stuff. I learned how to operate a midi sequencer in the early eighties, shortly after starting Metal Method. Even a beginner should learn how to do basic recording and to create drum tracks. You must record yourself often to make consistent, reliable progress. Digital recordings allows you to evaluate your skill more efficiently than trying to critically listen to your playing in real time. You can also keep a record of your progress in a folder on your computer.

Q. What are you most proud of with Metal Method?

Doug: I’m most proud when I read a forum post or an email message describing the positive impact that Metal Method has had on many of my student’s lives. It’s especially rewarding when someone writes telling me that they studied my course twenty-five years ago and it guided them into either a rewarding career or a life long hobby or for some it would be more accurate to call it an addiction. I never get tired of hearing success stories. It’s funny, many of them start off, "I know you probably get tired of hearing this…" Never!

Q. What sort of music do you listen to? Any albums in your collection that might be a surprise to classic rock fans?

Doug: I don’t listen to too much classic rock but I do have a few bands and artists that I occasionally go back to like Neil Young and Robin Trower. The Wallflowers aren’t Classic Rock but they have that sound. I do listen to them. Most of the stuff on my MP3 player is more modern new metal like Disturbed, Audioslave, Chris Cornell, P.O.D., Evanescence, and Staind. I was recently listening to Sheryl Crow’s "Wild Flower" album. Would that be surprising?

Q. I wouldn't have guessed.  So what's coming next? Not a Sheryl Crow DVD. 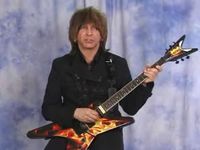 Aside from that I have several things that I’m working on but I’m not fully committed to any single project. I’m setting up a permanent video studio so I can do several short video clips. I’m planning to make them available online first and as I collect several, release them on DVD.

I haven’t been writing original music lately and I want to get back to that. That’s pretty consuming. To give that project the attention it deserves would give me very little time for other projects. So, stay tuned!

Ok, it was more than six questions, but it was all interesting, except maybe the piece about Sheryl Crow.  But I'm not judging.  I have a few guilty pleasures in my CD collection, too.  You can learn more about the  Metal Method DVD Course by going to Doug's site www.metalmethod.com and signing up for his newsletter or visiting the forums.

It's a great course and I highly recommend it. In the spirit of full disclosure, after I bought Metal Method and started using it, I joined their affiliate program.   So you can get free shipping on orders in the USA by clicking on the banner below and entering the code FreeShip at checkout.

I have been meaning to buy some of their products, but at the moment, I have more books, cds, and dvds that I already don't use. I am hoping that this new year: 2009, will bring me guitar practicing hope.

I am not that familiar with this mode of guitar playing but it is a fact that I came to know lots of information from this post.

Great! I really earned so many interesting ideas. It'll help everyone else there!

Online guitar lesson is one of the most convenient ways of practicing guitar because you can practice anytime and anywhere. You can choose your own time at any time of the day. You can also do it anywhere, all you have to do is to print out the lessons. You can also choose the lessons you want to learn, so no boring lessons that you need to follow.Along with this site i saw one more site which really helps the online guitar learners is http://www.totallyguitars.com/

Many people who don't know are really benefited by these posts. The beginners are getting some good information about new ways of learning guitar.

I've personally bought a few of Michael Angelo's DVDs and made great progress. Well worth the $$$.

I bought the lessons a long time ago as well, when I didn't have time for personal guitar lessons. He has an interesting teaching style, sometimes a bit slow, but very thorough.

Invite to all to listen. www.myspace.com/djbluez