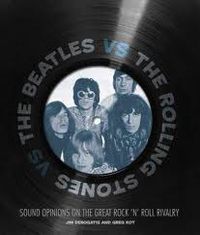 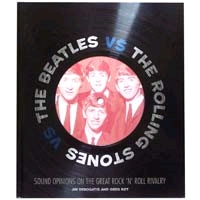 My favorite public radio podcasters, Jim Derogatis and Greg Kot from WBEZ's Sound Opinions, have teamed up to write a book to settle once and for all the epic debate: which is better The Beatles or The Rolling Stones?  Sound Opinions has dissected and analyzed the careers and music of both bands to weigh in on their strengths, weaknesses and shortcomings.  The book is written in an informal conversational style, much like the Sound Opinions show itself.  You may not change your opinion on this highly personal debate, but you'll at least gather more evidence to support your cause and you may also develop an insight into what has made both of these bands such legends in the industry.  The book also has a ton of rare photos that illustrate both bands at the heights of their careers, touring and in the studio.

As for me, I'm of two different minds.  I think The Beatles helped transform the pop music industry into something much more meaningful and lasting.  But I still love the all-out raunch & roll guitar focus of mid '70s Stones albums.

For music fans, The Beatles vs. The Rolling Stones

is a great book and no doubt will be a great gift this holiday season.   (Even more cool, the  book cover changes images from red to blue depending on the angle at which you view it!) 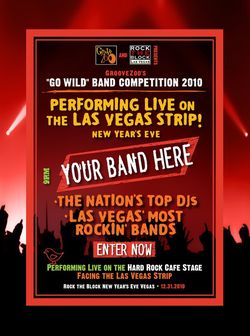 There's a new stealth mode startup called GrooveZoo that's going to launch a site for musicians, songwriters and producers to share and cross-pollinate their ideas and projects.  While there's not much info available until they launch, they are kicking off a pretty cool contest that will give a band the opportunity to open up for a major headline act on New Year's eve in Vegas.  Hey, just going to Vegas for New Year's is cool enough, but to play live, that's even better.  The grand prize winner gets full travel and accommodation expenses plus $1500 spending money.  There are also additional music gear prizes for second and third place runners up.

All you have to do is submit your song or video to the site and invite people to vote for it. Full details are available on their web site and their face book page.  This sounds like an excellent way for an up-and-coming band to make it's mark and have a great time doing it.

I'll post more information about GrooveZoo as they launch the site.

I must admit, I am 35 years late to the Krautrock party.  Sure I'd heard of Kraftwerk when they had their hits on the radio in the 80's, but it never did much for me.  However,  a couple of weeks ago, I happened to hear an interview with guitarist Michael Rother of the band Neu!  Rother and his musical partner Klaus Dinger played in an early incarnation of Kraftwerk in 1971 and then split off into a new direction forming the band Neu!

While the band never really broke out beyond indie status and recorded just 3 albums in 4 years, they went on to leave a huge imprint on many later bands.  Listening to Neu! and later albums from Rother in his subsequent band Harmonia helps explain the link between punk and the sounds of Public Image Limited in a way that I never understood before.  You can hear the Keith Levene style guitar themes and the steady "Motorik" drumming.  Neu! also influenced later bands like Joy Division, Radiohead and Stereolab among others.

Finally after so many years, and unfortunately after Dinger's passing away in 2008, the band is getting it's due.  There's a Box Set available (including a fourth album that was never officially released) as well as possible tour by Michael Rother.

I can't say this is music I would listen to at all times.  And to be clear, it's not the most soulful music.  But when it works, it works really well.  I've been listening to Neu! and Harmonia when I'm out running and this is the perfect music to keep you focused and on the beat for many many miles.