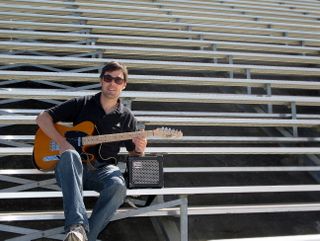 I recently picked up a small battery-powered Roland Micro Cube

amp to take with me to some guitar lessons.  I wanted something light, portable and battery powered.  Despite my skepticism about such a small amp, I've come away impressed with the Micro Cube.

Apparently, I'm not alone: Roland has sold more than a million Cube amps since it's introduction.  There are whole range of Cubes from the lightest Mobile Cube (which oddly enough is not cube shaped) to the big honking Cube 80X, an 80 watt beast with a powerful 12" speaker.  All of them share a common heritage and built-in modeling derived from Roland's COSM technology that provide a range of sonic choices: acoustic simulator, JC (Jazz Chorus) Clean, Black Panel, Brit combo, Classic Stack, high-gain R-fier etc.  Higher-end units have more features and more models such as Tweed, Metal and so on.  And there are also built in effects including Reverb, Delay, Chorus, Flanger, Phaser and Tremolo.

The Micro Cube is at the low end, but it's surprisingly powerful for it's size.  To be clear, this is not an amp you can use for a live gig competing against a drum kit. It's a 2 watt practice amp with a 5" speaker, so the emphasis is on portability. Think of it as a Pignose amp

updated for the 21st century.  It's small enough that you can take it places where you wouldn't have AC power: a day at the beach, a cabin by the lake, front porch, etc.  You can also use it for mic'd recording. The Micro Cube runs for about 20 hours on 6 AA batteries and also includes a 9 volt AC adapter.  Unlike the original Pignose amp, the Micro Cube has a variety of amp models and effects that give you a pretty wide range of tones from clean to classic blues crunch to full-on Marshall stack.  Despite it's small size, it can crank quite surprisingly loud when the gain is turned up. With a street price of around $130, the Micro Cube is a good value.  You can also find them used for well under $100.  Heck, you can spend more than that on a single effects pedal.

I tested out the Micro Cube alongside my Fender G-DEC, which is a 15 watt modeling amp.  The Micro Cube held its own in terms of volume with the acoustic simulator clocking in at around 75 db and maxing out at just under 100 db with full gain on the Stack amp model.  Volume alone doesn't tell the full story, but the tones on the Cube are as good or better than the G-DEC, though less varied.  Of course, the G-DEC also has other features like MIDI backing tracks and a built-in tuner, but in terms of sonic quality, the Micro Cube measures up nicely. 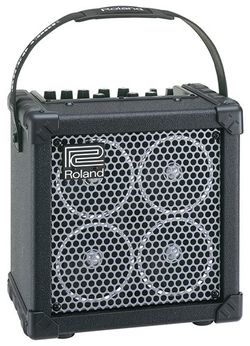 , which adds a range of drum tracks (rock, blues shuffle, country, funk, etc) an on-board electronic tuner, additional amp models and two sets of stereo speakers and 5 watts total power.  While still portable, the Micro Cube RX is slightly larger and several pounds heavier.  So if budget or portability are the primary concerns, you might prefer the original Micro Cube.  Otherwise, the Micro Cube RX is a significant upgrade and worth the extra $100.  There's also a Street Cube model with dual amps and speakers that's ideal for the guitar player trying to make some extra money busking.

Any of these Cube models make a great first amp or an additional amp for times when you need portability.

I have a Roland Cube 15x and it is more than loud enough for home practice with a clean channel and 4 other settings (overdrive, distortion, metal and metal stack). The 30x has a lot more features though.