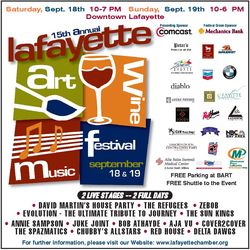 For the past few months, I've been part of a Blues Essentials workshop at Red House Studio in Walnut Creek.  We get together every Monday evening and work on a new song. Our workshop includes a range of guitar players, bass players and drummers of various skill levels.  This past Saturday morning we played our first ever live gig at a local wine & arts festival in Lafayette.  Although the set was quite short, a group of us rehearsed quite a bit over the last few weeks and it paid off.

I'm an occasional runner and I can't help but compare this first gig to running your first serious 10k race. You gotta respect any such event with your taining; you don't just show up and wing it.  And like a race, there's a million things that could go wrong.  Will anyone show up?  Can I find parking?  What if it rains?  Will our vocalist make it on time?  Where are the bathrooms?  Just like a race.

Luckily, everyone did make it.  And I think we sounded pretty darned good.   There's some video below that I've posted on YouTube.  The camera is a bit shaky in parts, but it captures the sound quite well.  I've also included the song "Love Me Like a Man" by some other folks in our workshop and a nice solo by Tom on "Tore Down."

Astute viewers will notice a minor slip up in the second song, JJ Cale's "Bring Down the Curtain."  James and I are soloing at the same time and stepping all over eachother.  Had I been paying more attention I would have just reverted back to rhythm and given James the space he deserved.  But there were 100 things I was trying to keep straight in my head (What key are we in?  Can anyone hear my amp?  Where's the 17th fret?  Don't play too many notes!  Relax. Is this in B?) and by the time I figured out what was going on we were back to the vocals.  No doubt it sounds like we were giving the song an unwarranted prog-rock treatment.

Even with this rough spot, I think we did as good a job as we could have done. James and Val were awesome both on their vocals and on guitar.  Holly and Lynn kept the rhythm locked in for us.  I was happy that I was in the right key at all times and didn't totally lose the plot.

They say that the difference between a jogger and a runner is a race entry form.  Perhaps we did the same thing today moving from wannabe's to musicians by playing what was the first live gig for most of us.  Playing in front of an audience is different from a basement jam or rehearsal.  You're out there without a safety net, exposing yourself to whatever might go wrong.  And that's part of why you rehearse, so that even if things go wrong, or rather, when things go wrong, you can still make it work.  Just like running a race.  I have no doubt there are thousands (millions?) of better players out there in the bay area alone, but we did something together on stage and put it in front of the audience and I could not be more proud of our performance.

If you're an amateur musician or wannabe in the SF East Bay, I strongly recommend you check out Red House Studio.  They have group and private instruction, rehearsal space, recording facilities, jams, shows, you name it and cover all range of music, skills and age groups.  Special thanks to everyone who helped get us on stage, especially Jeff Magidson the musical director and our blues instructor.  Jeff, we couldn't have done it without you.

Good job on ya! Gigs are fun, aren't they?

Which one is you?

I'm the guy with the white strat and the shorts. --Zack