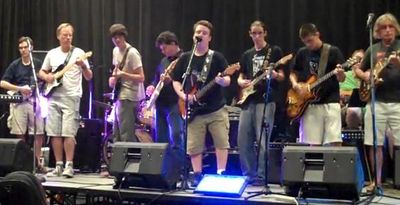 I just got back from a great week-long Texas Blues guitar session at the National Guitar Workshop.  It was a great session where I learned lots of new licks and techniques and got a chance to play on stage with a band.  Since I had been traveling for several weeks, I took my Steinberger with me, which is a great little guitar for travel.  But I must admit, it was sometimes tough to hear over the the much hotter sounds of the more prevalent Stratocasters.  So now I'm wondering if I should buy a new guitar...

And how the heck do I decide what to look at?  Sure you can try stuff out at GuitarCenter or whatever local independent shop you've got in town.  But what about objective reviews?  There's a new site that may help this situation, called TestFreaks. They have an extensive aggregation of reviews of electric guitars from across the web.   Though honestly, I'm not sure how they do the math on their scores, because they rated the Fender standard Strat  a mere 5.4 out of 10, compared to an 8.0 for the Fender standard Telecaster.

Or heck, maybe instead of getting a new guitar, I should get a nice little boutique-style amp with that classic over-driven blues sound.  Anyone got a recommendation for an alternative to the pint-sized Fender 57 Champ

I'll write more about the NGW workshop in the coming weeks.

frontman Kim Wilson at Biscuits & Blues, I also managed to see Jimmie Vaughan, Thunderbirds co-founder, at Antone's in Austin a few months back.

While the opening acts Carolyn Wonderland followed by the BlueBonnets were phenomenal, honestly, I was disappointed with Vaughan's performance.  Maybe it was the old school set list, maybe it was the late start, maybe the beer wasn't cold enough. Who knows? But the whole thing felt off for me.  I know Vaughan still lives in the shadow of his younger brother's phenomenal guitar antics, and I wasn't expecting him to do an SRV tribute or ThunderBirds re-enactment.  But it didn't work for me.

In comparison,  the opening acts stole the show. Carolyn Wonderland and especially the BlueBonnets brought energy and passion that really got the crowd hopping.  I left around 1am with a long drive ahead of me. I was happy to have seen the opening acts, but disappointed in Vaughan.  But maybe it got better after that. Take a look at the videos and judge for yourself.

Now if Vaughan would re-join the Thunderbirds, that would be interesting.  Meanwhile, for die-hard fans, Jimmie Vaughan is touring Europe in July and back at Antone's this Friday August 6.

Guitar Center's annual King of the Blues contest is back this summer with even more backing tracks from producer Pete Anderson.

Guitar Center has made available MP3 files of all of the backing tracks.  There are 30 tracks of various blues styles --Chicago blues, Texas blues, Slow Blues, Swing, Shuffle, T-Bone Walker style, you name it.  Although the key is not always indicated, they are mostly in A, D, E or are otherwise easy to figure out.  For the new songs there are charts that give all the chords.

Check out the new backing tracks featured in the video for some great blues inspiration!


I've been seeing quite a few gigs at Moe's Alley, the latest and best being UK up-and-comer Matt Schofield.  His classic brit blues trio is touring pretty much non-stop and it's definitely worth catching. Schofield and his keyboard player have been playing together since they were in short pants and they've added a superb drummer Kevin Hayes, formerly of Robert Cray's Band.

The band played cuts from his album Heads Tails & Aces

as well as classic blues songs from Albert King and others.  Here's a few select highlights I caught on video:

I've got a backlog of gigs that I haven't posted yet, so let me try to get a few taken care of.  A couple months back I managed to catch Blues harp master Kim Wilson at San Francisco's Biscuits & Blues club.  Last time I saw Wilson was at a lone European Fabulous Thunderbirds

gig at Stockholm's famous Akkurat club back in 2005.  This time I had my trusty Canon G9 on hand and got some photos and videos including an incredible 10 minute harmonica solo.  Personally, I like Wilson best when he's front the T-Birds, which has a more modern rock sound to it, but he puts on a great show in either context.  And it was a treat to see such great talent in an intimate club venue.

Wilson is as close to a modern blues legend as you can get.  He co-founded the Fabulous Thunderbirds with Jimmy Vaughan and has been giving it his all for more than thirty years, delivering a powerful blend of rock and blues.  Wilson has pulled the Thunderbirds back together for a summer tour through the US, Canada and Europe.  This is a unique opportunity to see a legendary band.  Or you can catch the Kim Wilson Blues Review in the fall as part of the Legendary R&B Cruise out of San Diego.

And if you're in the bay area, be sure to check out Biscuits & Blues; its one of my favorite clubs with  great live music, cold beer and and spicy southern food.