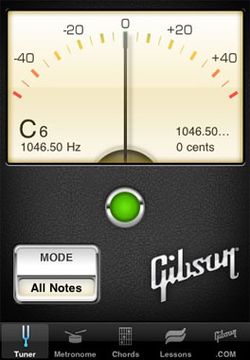 Gibson guitar, working jointly with Legacy Learning Systems, the folks behind the Learn & Master guitar series, have created a great free iPhone application.  The app provides a tuner (with support for alternate tunings), easy to use metronome and a basic beginner's chord reference as well as short samples of the Learn & Master guitar video courses via YouTube.  There's also a nicely tailored browser for viewing the Gibson web site news, feature articles and interviews.

While it's nice to have a free application that does all this, I found that the Chord reference was somewhat thin, providing open chords and just a few barre chord shapes.  Still, it's convenient to have in case you're ever trying to remember how to play a Dsus or B7.  But you're not gonna find a Hendrix chord, 9th chords or even chord inversions past the seventh fret.  Hopefully they'll do some updates in this area.  I hope they also add a scale reference and more samples from the  Blues Spotlight course.

Still, if you play guitar and have an iPhone, this is a great application to have.  In the coming weeks I'll provide more reviews of some other iPhone applications and podcasts for guitar players.

Update: Some of these links were not working previously 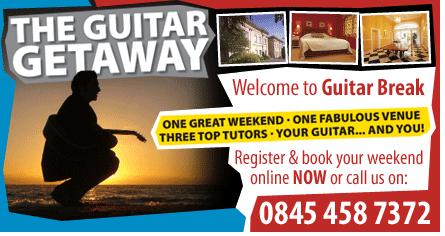 This is a guest posting from my buddy Richard from the UK who attended a recent GuitarBreak Guitar Getaway weekend near Guilford.

Looking for a way to improve my confidence and technique for impromptu blues/rock soloing I saw this GuitarBreak Guitar Getaway event advertised in the GuitarTechniques Magazine published in the but distributed globally now. Out of all the guitar magazines I’ve bought and kept! this has proven to be the most consistently helpful to me over the years – although it should be noted that they cover many different guitar styles, not just blues and rock.

This event took place over a weekend in Barnett Hill near - a good location in (ed note: The Stranglers were from Guilford!)  - and was chaired by Neville Marten and Jason Sidwell with a special guest : Dave Kilminster.  And check out the video below:

There's a nice interview with Neville Marten on the GuitarBreak experience and also a profile on the Tutors that GuitarBreak uses, including Neville, Jason and DaveK.

Attending the event were about a dozen players of varying ability and experience. When I booked to attend the event it was positioned for Blues/Rock Levels II/III, which I figured was something between ‘better than a beginner’ but a long way from being an expert guitarist. I was pleased to find that I wasn’t completely out of my depth.

Over the two days we had a tour across different topics starting with time signatures moving swiftly into right hand picking/muting techniques. We then took a look at the basic theory and practical approach to soloing over a couple of different chord changes - not your typical blues progressions – I think we started with Amin to F, and later progressed to Amin to Cmin.

Each time we were given the opportunity to test ourselves by going out to the front of the room and soloing over a backing provided by a tutor or a looper pedal, with some good feedback afterwards aimed at helping us progress  --rather than exposing our poor technique or personal nervousness! Attempting to solo directly in front of much better guitarists is something I find quite challenging – although I seem to be ok in front of a non-guitar playing audience!

On the second day, we had a flipchart session on what I called ‘Modes for Dummies’. This was a ‘light switching-on moment’ for several of us in the room! and the personal highlight of the event for me. To look at ‘modes’ in practice we then randomly chose some well known pop/rock ‘standards’ and briefly decomposed them to look at their key and modal approach taken to allow us to figure out how you would approach building an impromptu solo to the song. So now I know what mixolydian, dorian (and some of the others) modes are and why I should care! It was all a mystery to me before and something I glazed over on when I heard other guitarists talk about them…

Neville, Jason and Dave are all great guitarists – each with different emphasis and experience, but more than that, each of them were good at teaching us (with all our different levels of ability) several tips or approaches that would help us improve – which in turns build confidence – which increases motivation, which to my mind ultimately justifies the cost of the event. 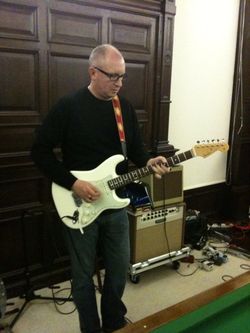 So what did I take away with me? Within a few days I had bought a Boss RC-2 Looper

pedal to help me practice the art of impromptu soloing over a backing track – rather than what I had been doing before – which was learning specific riffs and licks from songs by my favourite artists and then relying on my memory and ability to use them in a vaguely interesting way when I was jamming with friends on a more standard chord progression.

This has completely changed my approach to practicing. I now jam over CD backing tracks or input a more unusual chord change into my loop pedal, and practice putting myself in the impromptu situation. Already I feel more confident as a result.

Was it worth the money at £399 GBP? Absolutely 100%. I’m waiting to see the GuitarBreak.Com 2010 schedule and will definitely be attending another event this year!

Thanks to Richard for an excellent write-up.  GuitarBreak seems like a great experience for folks in the UK or Europe.  More information is available at the links below.  In the US the National Guitar Workshop puts together week-long summer guitar courses in Chicago, Austin, LA and Connecticut.

A few years back, I bought a Korean-made Steinberger Spirit

guitar from MusicYo, an online division of Gibson that has since shut down.  I originally bought the Steinberger as a travel guitar, but it has since become my main axe.  Despite the headless design, it's not as light as other travel guitars, but it is pretty sturdy and has a unique tone and nice sustain.  The guitar features EMG pickups and has a great feel.  MusicYo is gone now, but you can still find Steinberger Spirits online at eBay, Amazon,

and at Musician's Friend and most other online dealers.

Ned Steinberger, a furniture builder from New York, created the unique headless design for his namesake bass back in 1979.  He later branched out to create headless guitars built out of graphite and carbon-fibre, but these never broke into the mainstream and he later sold the company to Gibson in 1986.  Numerous other headless designs have emerged since the 1980s including Cort, Klein, Hohner, Traveler Guitar, Erlewine and others.  Some use an officially licensed version of the Steinberger bridge and tuners, others have their own unique take on things.  Ned Steinberger continues to create unique bass cellos, violas and violins in his new company, NS Design. 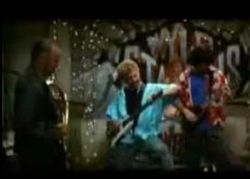 While these guitars are somewhat hard to come by, they have a devoted following.  Musicians famous for using Steinbergers include Lou Reed, Buck Dharma from Blue Oyster Cult, Geddy Lee and Mike Rutherford, who contributed to the design of the original M-Series guitars.

You can also find them occasionally in 80s movies and videos like "Bill & Ted's Excellent Adventure."

Update: I've also added a short video below that shows the Steinberger in action.