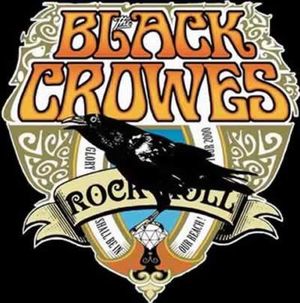 I apologize it's taken me forever to post these videos of The Black Crowes.  They played a private corporate  gig a while back and just ended up gathering dust for a while.  I must admit, I wasn't blown away by the performance and that was part of the reason I've been slow to post.

So if you're a die-hard fan of the Crowes, enjoy.  But if you're not, I don't think this performance will win you over.  Still fans of classic rock may want to check out the site Live Black Crowes for more videos and music.  The Cabin Fever

I've got some other videos in the queue from recent gigs by Jimmy Vaughan, Kim Wilson (both of the Fabulous Thunderbirds), and the hot Austin girl band The Bluebonnets.  So stay tuned... 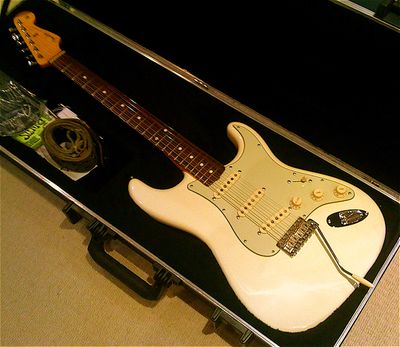 Following up on an earlier post regarding Fender's John Mayer Signature Stratocaster, here's a quick email from my buddy Richard in England after several weeks of playing:

Firstly, I just love this guitar! So much so that I've already sold my American Deluxe Strat to help pay for it.

But the way it came from the retailer is not a good advert either for them or for Fender USA. As soon as I got back to the UK I dropped it off at a local luthier and paid GBP100 for a proper set-up. Had the frets dressed, the action lowered - but not too much, and the trem set up. Plays like a dream now.

The picture still doesn't do it complete justice but is a step better than what's on the web site. The body is more off-white than arctic (with a subtle hint of mint green within the white finish) and a slightly darker pickguard. Looks very retro. With the set-up and slightly-sanded neck it's very easy to play. The modded pickups means that the neck and neck/middle positions are very smooth and mellow in sound. The bridge pick up seems to deliver a more 'biting' tone than a standard Strat.

I'm a big fan of John Mayer's playing. How he does all that left hand muting, and syncopated playing, all at the same time as singing as well as he does, means that the man has got God-given talent. Just try playing the main riff and various licks from 'Who Did You Think I Was' off the John Mayer Trio album, whilst singing at the same time - and you'll see what I mean.., The guy is an absolute star. The signature guitar - once set up - does him justice.

So if you're gonna buy an expensive signature guitar you may still need to budget for a setup to get it exactly to your liking. Learn & Master, which has a family of guitar instruction courses, has announced that they'll be releasing a new Bass Guitar spotlight course available in two weeks on April 30.  As a special pre-release promotion, the course is available for only $49, saving $10 off the regular price.  That includes a 3 DVD set of video lessons with LA bass player Tony Marvelli, plus a CD of jam tracks and downloadable course materials.

I've been playing guitar for many years (and sometimes struggling with it) but recently I've become interested in the bass.  Why?  Because the bass lays down the foundation for a lot of rock and blues.  The bass puts you inside the music in a way that no other instrument does.

I need to work on my rhythm anyways and I can't think of a better way to do it than learning the bass.  Some of the guys I jam with are pretty versatile playing both bass and guitar and I'd like to have that same versatility.  Guitar will always be my favorite instrument, but this course seems like a good way to expand my skills.

If you're a guitar player interested in bass, you can pre-order the Learn & Master Bass Guitar Course and save some bucks!  They've also got the Blues Spotlight course which is getting great reviews.

The Clash - Live at Shea Stadium 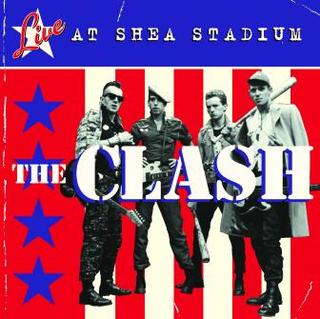 I count myself lucky that I managed to see The Clash twice in Montreal when I was growing growing up.  The first time was September 1979 on the "Take the Fifth" tour in a 2,000 seat theater, a few months before the release of London Calling.  And I saw them again, three years later, in September 1982 on the "Know Your Rights" tour in a slightly bigger venue.  But as much as I loved The Clash, they could be a bit hit-or-miss live.  Some nights they were tight as a drum and sometimes, well, not so much.

So I had some trepidation as to how good the "Live at Shea Stadium" CD would be.  The Clash were starting to come a bit unraveled, having released "Combat Rock" and promptly sacked drummer Topper Headon owing to his out-of-control drug addiction.  The Clash had several big stadium gigs opening for The Who on their final tour, including two dates at historic Shea Stadium, just a month after I saw them in a more modest arena.

But rest assured, "Live at Shea Stadium" is a great CD that's representative of The Clash at or near their pinnacle.  The recording is soundboard quality, far superior to any bootleg I've heard.  And it captures the spirit and energy of a gig that must have been exciting --even terrifying-- for the band.  Here they were playing in front of an audience of 70,000 people, an audience far larger than they'd ever had.  Highlights include a super funky version of "Magnificent 7," the always trippy "Armagideon Time" and the rousing "Should I Stay or Should I Go" featured below on YouTube.  For a band more accustomed to playing smaller arenas, they managed to do a great job filling She Stadium.  Though it's a relatively short set of the Clash's most accessible material, the band is in great form for just about every song. Ok, the vocals on "London Calling" and "Guns of Brixton" are a bit weak and Terry Chimes isn't half the drummer Topper Headon is.  But overall, it works great.

Bottom line: If you're a Clash fan, pick up "Live at Shea Stadium" and enjoy the memories.

If you're a fan of 60's english blues, you need to take a look at Joe Bonamassa's web site and figure out when he's coming to your town.  Heck, he's playing in Australia, the US and Europe and that's just through the early part of the summer!  So he's bound to make it nearby sooner or later.  And when he does, don't miss it.

I managed to catch a gig in Santa Cruz a couple of weeks ago on short notice and it was the best show so far this year.  Maybe the best gig I've seen since Buddy Guy last fall.

Bonamassa has been playing since he was 13 years old and was mentored by some of the greatest blues musicians ever.  At 14 he played in the band Bloodline along with sons of Miles Davis and Robby Krieger.  Now at 32, he's a man on a mission to spread his own unique blend of electric blues.  And, let me tell you, Bonamassa has a musical style with depth and breadth.  You've got everything from classic Cream style heavy blues to prog-rock and some acoustic alchemy and theremin thrown in for good measure.  The whole show ran for just over 2 hours, though it felt much faster.

released March 23.  Here's some video from his gig in Santa Cruz, CA.

Bet You Can't Play This, Dude

Ever get discouraged seeing super shredders and their "Betcha can't play this" solos?  Well here's the antidote video courtesy of Eli Santana and James J LaRue from the band Holy Grail.

And if you like this, you may enjoy Clapton Does Jazz.