Thunder: Out with a Bang!

A while back, I happened to be reading a UK music magazine, Classic Rock, as I sometimes do.  English reporters and writers are the best in the world, whether it's in music, technology, business or just about anything.  One of the cool things in reading a UK magazine is you can learn about music or trends going on outside of the good old USA.

There was a review for the UK band Thunder's latest CD called Bang!

Never heard of 'em.  But there was something about the review that sounded interesting.  I'm a classic rock kind of guy, so I thought I would check it out on Amazon.  Most of the time when I read about some new great band and listen, I'm left wanting.

The first song off the album, "On the Radio" got my attention.  Big riffs, stadium drums, wailing guitar solo, great vocal harmonies and plenty of rock & roll attitude.  Who are these guys?   How come I've never heard of 'em?  They opened for Aerosmith 20 years ago.  They've got a loyal following in the UK and in Japan, but never really had their big break. "On the Radio" says it all.

Record company got me a plugger
A charming man in every way
So I paid him lots of money to tell me
"It's been tough week, but what can I say?"
Working on my video
Because I can't you on the phone
So I know you're never gonna get this on the radio

People come to watch the show 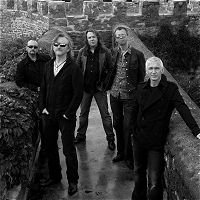 Because my aim is straight and true
Twenty years I make a living at this
No thanks to you
And the TV too...

I never went to high school
I was never in the NME
I got no chance sleeping with Kate Moss
What the hell is wrong with me?

Who did I forget to blow?
Should I go on a reality show?
Maybe then you'd vote for me
'Cause I can't get on the BBC

The album has a dozen cuts and all of them are great.  They cover all the essential elements of rock & roll: women, alcohol, road trips, blues, ballads, and, ah, more women.  The songs have great hooks and powerful vocals.  There's a couple of acoustic rockers including "Carol Ann" and "Turn Left at California,"  blues influenced songs like "Retribution" and "One Bullet" and some big old stadium rockers like "Miracle Man," and "Love Sucks."  Thunder may not breaking new ground, but it's a fresh take on a classic sound.  The music is authentic, up-beat and better than most of what I hear on the radio.

But, here's the downside of discovering bands that have been slogging it out for 20 years in the UK.  A week after getting into it and before I could even write this post, Thunder decides to call it quits.  Argh!  I seem to have a habit of discovering great rock bands just before they implode.  It happened with Brainpool, The Hellacopters and now Thunder.   Still, I don't think I'm to blame.  But you never know.   Thunder will complete their current European tour as well as a series of dates in Japan in April and in the UK in the summer, and that's about it.  They've done one US gig in the last 15 years, so I'm not counting on any gigs closer than Glasgow.

Nonetheless, if you like 70's style classic rock like Bad Company, Thin Lizzy, The Guess Who, April Wine or the fictional Strange Fruit, then go get Bang!   Immediately.  An MP3 version of Bang!

is available on Amazon: 12 great songs for nine bucks with no DRM.  What are you waiting for?  You can also get their previous album "Robert Johnson's Tombstone

for just eight dollars.  And you can get some of their back catalog on eMusic.

Here's one of their live acoustic videos:

Tags: Bad Company, On the Radio, Out with a Bang, Robert Johnson's Tombstone, Thin Lizzy, Thunder

Classic Rock is definitely one of the best magazines out there for fans of rock music. It covers new and old rock, has a great review section and some excellent interviews. It reminds me of the old Kerrang! in the 80s (before it became a metal fodder magazine). How I miss England. Check out the concert listings and you will see that on just about any given night you can see a great band in London.

Thunder, there's a blast from the past I remember seeing them open at Donnington Monsters Of Rock back in '91 they were awesome!

They were a great band. I was very sad to see them split up. They seemed to get better and better this last few years.
I highly recommend the album you mentioned as well, Robert Johnson's Tombstone,or their first one Backstreet Symphony (or any of their compilations if you want to get an idea of how they sound).
The Guitarist Luke Morley is now in a new back called The Union.