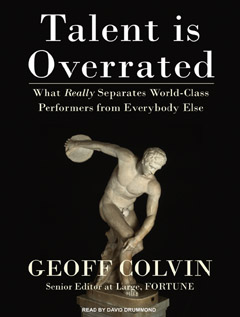 My wife and I have a long-running disagreement on the nature of musical talent.  I don't believe in innate abilities --and I obviously don't have any --whereas she believes that some people are just born with a musical gift.

I've written previously about the stages of learning as described in the book "Mastery: The Keys to Success." These stages can apply to sports, music, business or almost any endeavor.   I believe that "brute force" practice and determination can make up for lack of innate talent in lots of different areas, whether training for a marathon or learning to play guitar.

More recently, I've been reading Geoff Colvin's terrrific book "Talent Is Overrated" which reaffirms my views.  The book explores the myth of innate talent and how experts really develop their abilities.

Early in the book, Colvin describes a UK study of 257 music school students that sets the stage:

The results were clear.  The telltale signs of precocious musical ability in the top-performing groups --the evidence of talent that we all know exists --simply weren't there.  On the contrary, judged by early signs of special talent, all the groups were highly similar...

Still, the students obviously differed dramatically in their musical accomplishments, and even if extensive interviewing turned up no evidence of particular talent, weren't the differing levels of achievement in themselves evident of talent?  What else could it be?  As it happens, the study produced an answer to that question.  One factor, and only one factor, predicted how musically accomplished the students were, and that was how much they practiced.

Specifically, the researchers studied the results of those nationally administered grade-level exams.  You would expect, of course, that the students who went on to win places at the music school --and this was a school whose graduates regularly win national competitions and go on to professional music careers --would reach any give grade level more quickly and easily than the students who ended up being less accomplished.  Thats the very meaning of being musically talented.

But it didn't happen.  On the contrary: The researchers calculated the average hours of practice needed by the most elite group of students to reach each grade level, and they calculated the average hours needed by each of the other groups.  There were no statistically significant differences.  For students who ended up going to the elite music school as well as for students who just played for fun, it took an averaged of twelve hundred hours of practice to reach grade 5, for example,  The music school students reached grade levels at earlier ages than other students for the simple reason that they practiced more each day.

Colvin goes on to describe the notion of "deliberate practice," the way in which people learn new skills through concentration and focus.   It is an approach of learning to learn, that is applicable to music, sports, business or creative endeavors.  In my experience, until you have the right approach to learning, you're just dancing in the dark.

Deliberate practice is quite different from the usual mind-numbing playing of scales or familiar songs that you may think of as practice.  It also explains why some people never seem to get better despite years of playing the same thing over and over again.  You really have to push yourself to learn new things and practice not with your fingers, but with your mind.  These ideas are applicable to individuals and to businesses.  You can read a longer excerpt of Colvin's book at Fortune magazine.

There are also links below to guitar DVD courses from Metal Method and Learn & Master which I consider to be quite good at helping with the deliberate practice that is essential to developing your skills.

What do you think?  Can brute force match innate talent?  Let me know...

Update: Some of these links were not working previously

Gary Klein's book "Sources of Power" (MIT Press) was one of the first that pointed out the key of experience (i.e., practice) as the main driver of excellence in almost every profession. It made a great impression on me when I read it ten or so years ago.