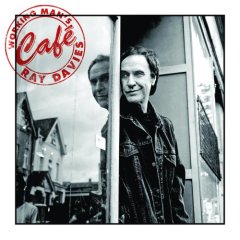 From the first track of Ray Davies' latest CD "Working Man's Café" it's clear that at the ripe old age of 65 the man still has a lot to say about what's going on the world.   Vietnam Cowboys is a biting commentary on globalization and the loss genericization of culture.  But rather than preaching, Davies' combines wit with a good ol' rock and roll soundtrack.

For a guy who penned more classic hits in a single Kinks album than most bands achieve in a lifetime, it's great to see Davies still very much a working man.  Vocally Davies' remains as strong as ever.  Musically the album sounds a bit like late stage Kinks combined with a dose of Nasheville sound and a pinch of Mark Knopfler.  At any rate, it's rock music that has something to say.  While not every cut on the album is a hit, there's at least half a dozen great songs and a couple of close contenders.  It may not have brother Dave pounding out Kinks riffs, but it's still a strong, upbeat album and thoroughly enjoyable.  There are some good clips on YouTube; the segment below is the song "In A Moment."

Ray Davies continues touring and has a few upcoming dates  in the UK and the United States.

This is another guest post from my buddy Rick in Phoenix on the legendary cult band NRBQ (New Rhythm & Blues Quartet).

It’s all there in their first ‘hit’, “Flat Foot Flewzy” – an amazing guitar riff to lead off, sinking into a deep groove that keeps on rolling over a nonsense lyric, but throughout it all, music that just makes you want to smile.  NRBQ is one of the greatest bands of all time.

In some ways, NRBQ never ‘progressed’ from that initial shot.  They just kept creating small masterpieces over the years, refining the perfect pop song in a hundred different ways.  You can pick them up from nearly all their albums, from the rock splendor of “Me and the Boys”, to the novelty of “It Was An Accident”, to the touching “Another Word For Love”.  And any aficionado could add dozens to this random list.

One of the most admirable things, for me, about the Q is how they just kept doing it.  They never really cracked anything like the big time over more than 3 decades of recording and playing.  But they kept it up, and every live show was an unpredictable rollercoaster ride.

In person, they were always a riot. Terry Adams’ stage persona was a complete goofball, so much so that it took a while to realize that his stumbling approach to his keyboard overlaid some impressive chops as a musician.  And they always seemed to take real pleasure in playing together.  As they put it in “Things we like” – “We like to have lots of fun and play these songs for you”

Which brings up back to joy.  How joyous?  Tom Ardolino, their drummer, was just a fan when he got called to sit in on short notice.  He ended up playing with them for more than 30 years.  And there is nothing surprising when you hear that Tom has one of the biggest record collections in the world.

NRBQ have never been flashy, just deep, mining a rich vein to perfection.  An old friend and I were talking recently, and we agreed on a one-question test to determine if someone was a real music fan – “Do you love NRBQ?”  And, if they didn’t know the Q, playing half a dozen tunes would act as an instant aptitude test.

If you're not familiar with NRBQ, check out the video and some of the links below.

The Stranglers - Rattus at the Roundhouse 30 Years Later 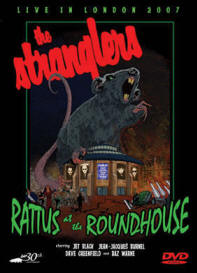 When you think of bands that have withstood the test of time, touring and recording albums for 35+ years you might think of The Rolling Stones, AC/DC or even KISS.  But there's another band that's been on the road just as long that you may never have heard of: The Stranglers.

Despite a large number of top-40 singles, The Stranglers never made it into the US mainstream.  Though their sound was more sophisticated than a lot of Punk bands from London in the mid-70s, they got lumped into the Punk / new-wave scene which they outgrew in a few years.

While the band has gone through some changes over the years (notably, founding guitar player Hugh Cornwell's departure in 1990), they've continued on with the other three original members and most recently with Baz Warne on guitar and vocals.

In 2007 the meninblack did a 30 year anniversary gig at the London Roundhouse resurrecting the original set list from 1977.  I'm looking forward to seeing this DVD when it makes its way to the US.  And heck, lets hope for a US tour in 2010.  Meanwhile, here's "Hanging Around" from the Roundhouse gig via YouTube.

There was a time long ago when I liked traditional Jazz, but I think this video does a better job of explaining my falling away than any high-falutin' Wall Street Journal article...