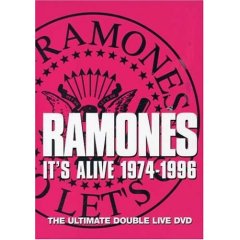 The Ramones have put out a collection of live footage: It's Alive 1974-1996.  The DVD captures the band from their rough gigs at CBGBs in the early 70's through major concerts like the sweltering hot US festival in San Bernardino 1982 (shown below) to their final tour in 1996.  After 22 years on the road and over 2,000 gigs, the band hung up their gear and retired.

While the Ramones never achieved the recognition they deserved when they were touring, they spawned the UK punk rock invasion of the late 70's, inspiring bands like the Sex Pistols, The Damned and The Clash.  And their influence went beyond the 70's to impact heavy metal and nu-metal that came in the 80's and 90's.  If there was ever an inspiration to the musically challenged, it was the Ramones.  They proved that you didn't need to have good looks or natural talent to create a band.  In any other outcome these guys would have been construction workers.  But they picked up guitars and rocked louder and faster than anyone else.  Johnny Ramone got more out of 3 barre chords on his $50 Mosrite guitar than most virtuousos get in a thirty minute solo.  And I defy anyone to listen to classic songs like "Rock and Roll Radio," "Sheena Was a Punk Rocker" or "Blitzkrieg Bop" and not start moving to the beat.

Clocking in over 4 hours across 2 DVDs, there's some great footage as well as a few rough spots.  The video from a concert in Argentina at times feels like it was shot from a pogoing punk in the audience.  But the good footage more than makes up for poor production on some numbers.  You see po-faced Johnny with his classic buzzsaw guitar technique, Dee Dee bashing his low-slung Precision Bass at a million miles an hour, all acompanied by no-frills frenetic 4/4 drumming.

Also worth checking out is the documentary End of the Century DVD which tells the whole Ramones story upto and including their indoctrination into the Rock and Roll Hall of Fame.   And their greatest hits CD Ramones Anthology makes a good intro to the band.

So much to say about the Ramones - I lived on the Lower East Side from 77-79, their heyday. But I recently found out that Springsteen wrote Hungry Heart for the Ramones, although Jon Landau told him to keep it for himself.

And I'll never forget an image from a salad bar in Detroit = my Dad (not the coolest guy in the world) standing next to Joey.