I managed to catch Aerosmith playing a private concert at the Oracle Open World conference in October in San Francisco.  Now it turns out that this may have been Aerosmith's final concert ever.  It seems that Steven Tyler has resigned from the band to embark on a solo career.  Or maybe he's on hiatus.  Or maybe he's going to front some reworked version of Led Zep with Paul Rodgers taking over the vocals in Aerosmith.  Or maybe after walking on to play "Walk This Way" at a Joe Perry Project show in New York everything's hunky dory once again.  Or maybe it's not...

Honestly, I don't even think Joe Perry knows what's going on any more with Aerosmith.

But it was still a good show.  Maybe not as good as when I saw them a few years ago, but good fun nonetheless.  I brought my Canon G9

camera, so enjoy the photos and the video.

We all love Eric Clapton's leading riff in Sunshine of Your Love.  And Hendrix did a passable cover too.  But have you heard the version with no guitars?

Probably not, but let me tell you, your life has been all the poorer as a result -- Until now.  Ralph 'Soul' Jackson's version of Sunshine Of Your Love the 1968 Cream hit, released a year later by Atlantic Records, the same label as Cream, shows how much raw energy and musical power can be translated from rock to soul with no loss.

How I came across this vinyl treasure is another story in itself.

Red Kelly, a blogger and soul music collector, took it upon himself to start ripping his old vinyl singles and putting them up on his blog because he knew they'd never make it to CD and most music fans would never get to hear them.  He has several blogs dedicated to this passionate hobby, with "The B Side" being a treasure of lost vinyl (you guessed it) B-sides and "The Soul Detective" featuring stories and compilations of music by long-lost artists that he tracks down.

I stumbled across this in March when the Wall Street Journal (of all places) wrote about how bloggers are reviving obscure music.

Check out the sweet guitar sounds of James Hines, soul detective case number three. Hines,  Born in Flushing, NY, was near-blind and worked as an auto mechanic and musician who produced some great tracks like "Can't Think Of Nothing (Blank Mind)" that would inspire any guitarist today.  Or how about Roy "C" who had a string of hits like "Open Letter To The President," which stand up today better than the reputation of the Vietnam-era president he was writing to.

For anyone looking to flush out their musical knowledge, Red Kelly's web sites are a fantastic encyclopedia of songs, pictures, articles and obscure facts about great musicians.  There's also a huge library of streaming music files (complete with scratchy vinyl sounds) and podcasts of songs for which copyrights have expired and which you will likely only ever see again in a Louisiana garage sale.

Also check out Roy C's open letter to the president and a preview of Chase Thompson's documentary film on YouTube.

I stopped by the Little Fox theater in Redwood City this past weekend to check out two tribute bands: Zoo Station and Stung.  There was also a Tom Petty tribute called Petty Theft that was quite decent.

Zoo Station was up second and they looked the part and had the right equipment, with the guitarist toting a Gibson Explorer, plaid shirt and skull cap just like The Edge.  Musically it was great, but the vocals were getting lost in the mix.  Still they got the crowds going, especially when the singer went out into the audience and up to the balcony.  It was a long set pulling from every stage of U2's career.  The older songs sounded best but they also did more obscure numbers as well as songs from the most recent albums. Zoo Stations has got a couple of more bay area gigs before they wrap things up for the year.

Stung was the closing act, and although The Police don't have the popularity of U2, they were definitely a great finale.  Singer and bass player Brooks Lundy was able to match Sting's vocals near perfect. In fact, he's got range and level of energy that even Sting would have trouble keeping up with today. 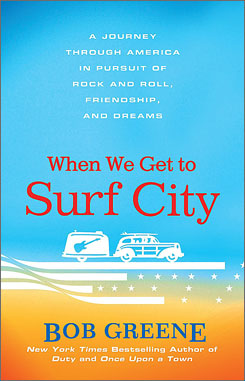 I just finished reading Bob Greene's 2008 book "When We Get to Surf City." It's a rock and roll travelogue featuring a middle aged writer from the midwest who manages to tour with surf guitar legends Jan & Dean for 15 summers in the mid 90's and early 2000s.

Having lived in Chicago for a few years, I have read a lot of Bob Greene's folksy tales of Americana.  His writing style can get a bit prescious after a while and so most people either love him or hate him.  The book's subtitle is a good hint at Greene's style: "A journey through America in pursuit of Rock & Roll, friendship and dreams."  So if you can get through that opening salvo along with Greene's occasionally heavy handed prose, it's a nice, light read.  Particularly if you're a fan of Jan & Dean, the Beach Boys, Chuck Berry, The Kingsmen, Dick Dale or other early Rock & Roll acts who cross paths with Greene over the summers.

The book is a bit more compelling if you know the backstory of Jan & Dean.  They were two of the rising stars in the late 50's with California good looks and hit songs like "Surf City" (co-written with Brian Wilson), "The Little Old Lady from Pasadena," and the ominously prescient "Deadman's Curve."  At the height of their popularity, Jan Berry suffered a near-fatal car accident putting an end to the Hollywood story.  And yet 30 years later, Jan & Dean were still out touring, with Berry re-learning the words nightly to the songs he had written years earlier. 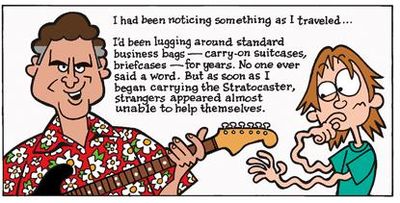 Green gives you breezy snapshots of countless gigs at countless county fairs, beach boardwalks and insurance company sales conventions peppered with stops at burger joints and bars across the country.  I sometimes wish there was a bit more depth on the relationship between Jan & Dean, but overall it still works. (The cartoon is from BlogJam, not the book.)

But I still can't help but wonder: how the heck did Bob Greene end up playing guitar and singing with Jan & Dean in front of 60,000 people opening for the Beach Boys?   I guess dreams can come true.