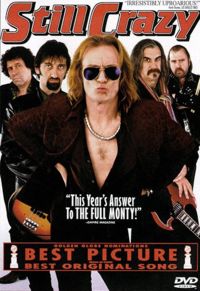 Still Crazy is one of my favorite rock movies.  It's a comedy and as funny as Spinal Tap, but with better music.  It tells the story of Strange Fruit, a fictional UK band from the 70s that follows in the familiar trajectory of Pink Floyd or Fleetwood Mac.  After losing a founding member to drugs, the band disintegrates and attempts a reunion many years later.  The film stars Billy Connolly, Bill Nighey, Stephen Rea and Jimmy Nail who contributed greatly to the music.  The soundtrack is a gem with original songs that capture the spirit of an era better than you might expect.