Ramones: End of the Century 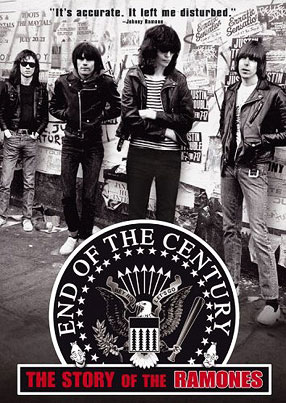 I recently watched the 2003 Ramones biopic "End of the Century."  It's the story of the Ramones over their 22 year career as they emerge as the original punk band from New York's CBGB's to influence every major metal, punk and alt band of the last 30 years.  Without the Ramones, I don't think you'd have had bands like the Sex Pistols, The Clash, Buzzcocks, GreenDay, Offspring, Metalica or others.

I must admit, I was late to the Ramones

party.  I never listened to their music until seeing this movie and I'm sorry that I missed out.  While there's a definite sameness to their two-minute buzz-saw three-chord rock, there are enough stand out songs and 50's era harmonies to make it worthwhile.  The good news is, it's still a unique sound many years later.  But unfortunately, the Ramones story outlasted the founding members Joey, Dee Dee and Johnny who each died rather tragically within a few years of disbanding.

The movie does a great job showing the roots of the Ramones from their humble origins in Queens, to their influential UK gigs in 1976 and their reconciliation that they would remain unheralded road warriors, eeking out a living but never achieving a hit record or stardom.

Check out the YouTube excerpt below showing the Ramones' 2002 induction into the Rock and Roll Hall of Fame, the year after Joey Ramone's death of lymphoma.  Dee Dee would die of a heroin overdose just two months later.   And Johnny succumbed to cancer two years after that.