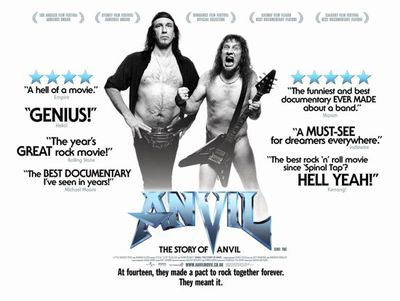 "Anvil: The Story of Anvil

" is coming out on DVD this week and it's as a good a movie as ever has been made about rock and roll.  Anvil is not the story of a hugely successful band; it's not U2 or Led Zep recalling their hard scrabble days from mansions in the hills.  In fact it's a band I'd never even heard of.  And I can't say I'm a big fan of thrash heavy metal.  But the movie is great.  As Bill Murray might put it, it's a Cinderalla story about a working class band from Toronto 25 years after their career peaked.  They're still at it, married with kids and holding down day jobs, still looking for a break.

While Anvil pioneered thrash metal and influenced the likes of Metallica, Anthrax, Megadeath and others, they never achieved any success after their first three albums.  But the band never split up, they just kept on playing to smaller and smaller audiences, sometimes outnumbering the fans.  Critics have hailed the film as a true-life "Spinal Tap" and there's certainly some funny moments as they go on tour, miss trains, don't get paid and still keep on playing.  But there's a kinship you will feel as the band slogs on with its ups and downs.  At 14, guitarist Steven "Lips" Kudlow and drummer Robb Reiner made a vow to become rock stars and and more than 35 years later, they're still living the dream.

The film, by first-time director and former Anvil roadie Sacha Gervasi, premiered at Sundance in 2008 and has been winning audiences over ever since.  If you haven't seen it, get the DVD

which also includes bonus footage and an interview with Lars Ulrich from Metallica.

Anvil will be touring the UK in November and then the US and Canada in January & February 2010.