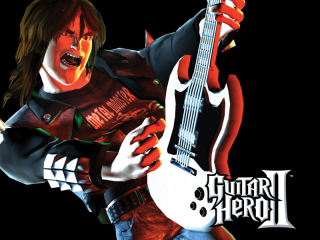 A while back, The London Times released the results of a study indicating that kids who play music video games like Guitar Hero and Rock Band

may take up the hard stuff --namely real musical instruments.

"We have long known that young people are encouraged to take an interest in music if it is presented to them in a compelling way," said Andrew Missingham, the music industry expert who wrote the report. "This research for the first time shows conclusively that young people are being inspired to make their own music by games that first piqued their interest."

The results aren't any surprise to anyone who has observed kids playing these games.  I've seen my nephew go from Guitar Hero to Rock Band and now he's playing a full-size Strat.  While he was always interested rock music, it wasn't until he started playing the games that he developed an interest in playing music.  While these games are no substitute for real musical instruments, they do help develop basic hand-eye coordination and rhythm --both in kids and in adults.

So go ahead, break out the Rock Band game with the kids.  Not only is it fun, but it might just develop their interest in playing music.  Lets see where this leads to in a few years.  We might just see a classic rock revival.

I'd like to add that numerous studies have shown that students who play musical instruments, including the guitar, do better at math than non playing students.

I've noticed many geeky types are musically inclined, but I wonder what is the nature of the corelation. e.g. does math skill cause musical ability or the other way around?

Let me know if you've seen any studies that provide more information on that.