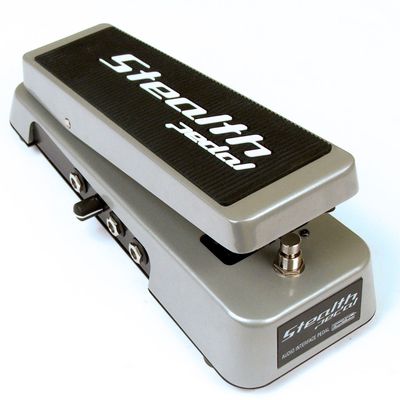 If you're looking to plug in your guitar to your computer in order to record music, jam to practice tracks or get in on the whole amp modeling phenomena, there are lots of different ways to do it.  They all involve using some kind of a USB interface, getting new high-performance low-latency drivers and then getting some software to recognize the device and configure it for input.  That's all before you even start thinking about amp models and software effects pedals.  In short, it's harder than it should be.

Now IK Multimedia has done something out of the ordinary by combining an easy plug-and-play experience with great software and a heavy duty "Wah" expression pedal.  The StealthPedal works both as an audio interface to your guitar as well as a MIDI controller.  With a list price of around $270 (street price $200), it's not the cheapest solution out there (IK Multimedia's StealthPlug wins in that category), but if you're looking for a full-blown MIDI controller with the power and convenience of a Wah pedal, it's a good value.

I tested out the StealthPedal on both a Mac and a PC.  As with the previously reviewed AmpliTube Fender Studio, everything worked flawlessly.  The installation takes care of setting up new low-latency ASIO drivers.  Since the Stealth Pedal is powered by the USB interface, you don't need to plug in a separate AC adapter and power cord.  This also makes it easier if you're taking it on the road or moving between different computers --it's one less thing to leave behind.

Right out of the box you'll be impressed that the StealthPedal is not some piece of chrome painted plastic; it's rugged steel and feels like it would withstand the travails of live gigging as well as any BOSS stomp box.  The StealthPedal includes input jacks for two instruments, as well as jacks for a separate expression pedal and two-switch controller stomp boxes which are available separately.  It's also got a headphone line out as well as separate stereo line outs.  The bottom line is you can build a pretty sophisticated and expandable rig, as long as you don't mind having a computer with you on stage. 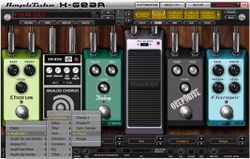 Also included is a full complement of software.  You get AmpliTube 2 Live modeling guitar amps and software effects pedals along with Ampeg SVX UNO (who comes up with these names?) bass amp modeling.  This provides three different software modeled amps and 11 effects.  There's also a Deluxe version of the StealthPedal available which includes the more full blown versions of AmpliTube 2 and Ampeg SVX giving you dozens more amp models and effects.  IK Multimedia has a current promotion whereby you get AmpliTube Metal with either StealthPedal package.  That gives you a boat load of high-gain amps and heavy metal effects like the Electro-Harmonix Big Muff, Digitech Whammy and various BOSS overdrive pedals.

To round things out, IK Multimedia also includes the AmpliTube X-Gear expandable software interface (for adding other AmpliTube software), Sonic Reality's AmpliGrooves Loops backing tracks and a copy of Sonoma Wireworks' low-end Riffworks T4 recording software.  With all the software included, this is a heckuva value.

True to IK Multimedia's reputation with AmpliTube, the modeling is first rate and the interface is noise-free.  You get a lot of different sounds at your disposal with this package, and you can customize and tweak the settings easily.  And with the X-Gear interface, you can continue adding new amps and effects as they become available.  Check out the video below for a demonstration of how the StealthPedal can be used with the full range of IK Multimedia's modeling packages.

If you're looking to create an expandable modeling setup and want something heavy duty, the StealthPedal is worth investigating.

I've been searching for an interface to record my bass on the computer. Since this one has bass amp modeling and bass effects built in, it seems like the almost perfect solution. The price is the only down side for me, but with everything it comes with software wise, I think I'll save up the coin and add this to my pedal stable. It's seriously on my radar for a next purchase.

DOes it have any noise issues as the Stealth plug in is noisy and hissy?