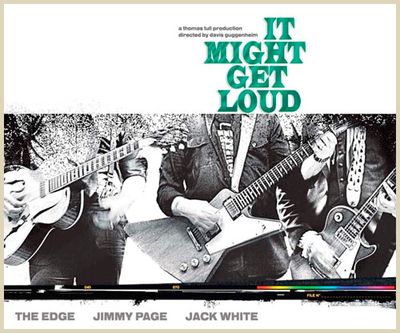 I managed to see the film "It Might Get Loud" this past weekend and my one word review is: awesome.  If you're into guitars, or rock music in general, it's a great journey into the minds of three guitar players: Jimmy Page (The Yardbirds, Led Zeppelin), The Edge (U2) and Jack White (White Stripes, Raconteurs).  But it's not the typical "behind the scenes" movie about the ups and downs of being in a band or  the rock & roll lifestyle.  It's just about the music, and more specifically, the guitar.

In choosing Jimmy Page, The Edge and Jack White, film maker Davis Guggenheim brought together not only three guitar greats, but more importantly, three generations with Jimmy Page as the elder statesman, The Edge as the technology innovator, and Jack White as a back-to-the-roots radical.  (If the film was made thirty years earlier it might have featured Buddy Guy, Keith Richards and Joe Strummer. )

In some of the early scenes of the movie there's a stiffness as the three of them are brought into a rehearsal space together; they are respectful but not quite connecting.  But when Jimmy Page starts playing the riff to "Whole Lotta Love" their ages, backgrounds and musical styles go out the window. At that point, they're fans of the music, just like us. You can tell these sounds move them as much today as it did when they first heard them years ago.

The movie takes you through the backgrounds and influences of each of the musicians.  You see rare early footage of Jimmy Page playing in a skiffle band, U2 playing as teenagers and Jack White's obsession with drums and guitars.  More importantly, you learn what music influenced them.  It's fascinating to see Jimmy Page playing air guitar to Link Wray's Rumble or hear how U2 were inspired by The Jam, The Clash and The Sex Pistols.

For anyone interested in guitar and rock music, this is a must-see film.  I hope when its released on DVD

we'll get to see even more of the three of them jamming.

What a great concept. Three generations, three unique styles, three household names in the guitar world... one story. I have yet to see this movie but like the author, hope the DVD is filled with extra jam footage.

Joe Strummer was 30 years ago? Man reading that sentence shocked me.

Yep, and consider how many years you'd have to go back to make Jimmy Page the "young gun" in a film like this! The line up could have been Muddy Waters, Link Wray and Jimmy Page!