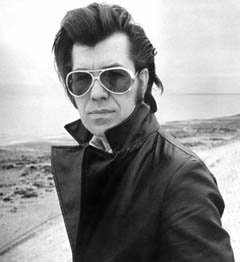 So what do Pete Townsend, Jeff Beck and Bob Dylan all have in common? They owe part of their guitar style and sound to Rockabilly legend Link Wray who turned the music world upside-down by pounding out the first ever power chords on his electric guitar in the late 50's.  In Pete Townsend’s unpublished liner notes for Wray’s 1970 comeback album, he wrote: "He is the king; if it hadn't been for Link Wray and 'Rumble,' I would have never picked up a guitar."   Link (short for Lincoln) further enhanced his unique style of play by making small razor blade slits in his amplifier speakers to generate a distorted/fuzz effect out of the speakers; a sound of things to come.

These unorthodox yet innovative techniques came together to launch his most famous composition entitled " Rumble".  Released in 1958, this tune was so controversial at the time, Wray’s own record label wouldn’t release it for fear it would provoke bad behaviour in America's youth.  The song was banned from many radio stations because it's title connoted gang violence.

I was given a copy of Wray’s self titled 1970 album release which features some punchy rockin’ blues tunes like; Juke Box Mama, Fire and Brimstone and my favourite: Singing Halleluiah. The hard driving drum beat on this song coupled with Wray’s torn-speaker distortion effect on the lead solo may well have served as inspiration for a song recorded 3 decades later entitled "Are you gonna go my way" by Lenny Kravitz.

Link Wray passed away in 2005 at 76 but never really got the recognition he deserved.  You can find some of his songs on MySpace and on YouTube. Although you won’t find any live performances of the songs from the ’70 self titled album, you will see Billy Hancock’s somewhat loose rendition of "Fire and Brimstone". Wray’s cover version is better and the rest of the songs on this somewhat forgotten album are well worth the listen; the missing Link has now been restored.

Dude! Great blog! Stumbled upon it today while searching for info on Keith Holland's Los Gatos brand guitars. Your blog came up in the search (though no info on the guitars themselves). Anyway, just wanted to send you kudos!

I'm a South Bay native myself, so it's cool to encounter someone who loves guitar and blogs about it as well... I invite you to check out mine: http://guitargear.org.

I wanted to say thanks for this post. For whatever reason, I have never heard of Link Wray. But after reading your post I did more digging and listened to some of his work. I like what I am hearing.

Funny how much you THINK you know...

Goofydawg,
thanks for the message. I actually stumbled across your site recently and I can't remember why. I think I mentioned Keith Holland's store a while back, maybe regarding Reverand Guitars. They've done some setup work for me on occasion. Always top notch. I'll add a link to your site...

I went to a Sony screening of 'It Might Get Loud' last week and there's cool scene with Page on Wray.