to pick up an effects pedal, taking advantage of the lower US pricing.  While I wasn't planning on buying anything, 30 minutes later, I walked out with a new Epiphone Les Paul Studio in arctic white.  I was planning on buying a second guitar which I would keep over at my in-laws place.  (I think this is part of my wife's overall plan to get me to spend more time with family.  Hey, if that get's me a new guitar, I'm fine with it.)

Originally, my plan was to test out some gear, and then just buy something locally near my in-laws.  Since this would be a spare guitar that would only get occasional use, I was aiming for something around $200-$250.  I tried a few sub-$200 guitars, but the quality just wasn't there and I figured I would just get frustrated if the action was too high or if the guitar wouldn't stay in tune.  I tried a few low-end Squire strats and telecasters and while they were ok, nothing really set me on fire.

But then I spotted a beautiful white Epiphone Les Paul Studio for $300.  I was really impressed with the playability and the tone.  Admittedly, it's not a high end Gibson, but the action and setup are decent right out of the box and it feels sturdy.  The guitar is also lighter than I had expected, my estimate around 7.5 pounds.  The pickups are great, the neck is good and it's got nice sustain and a beefy classic humbucker sound.  Plus, I gotta admit, in arctic white, this guitar looks very cool.  If a white Les Paul is good enough for Steve Jones of the Sex Pistols, it's good enough for me.  And my in-laws. 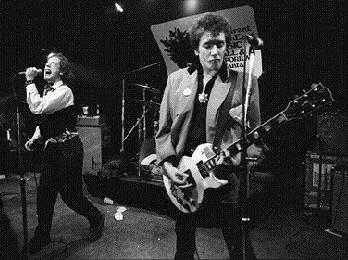 Overall, it's a very high quality guitar with a nice warm tone and plenty of sustain for blues or rock, especially when you apply a bit of overdrive.  The only thing that I think degrades from the overall quality is that the tuners are not that stable.  But if you can live with occasionally re-tuning, it's a great sound at a bargain price.

Update:
I've added a video review on YouTube below.

OMFG! That looks so frickin' cool. I want one! Of course, what I really want is one I can plug in to my xbox 360 and rock out. Cheap Trick rulz! :p

I am a sucker for a white electric guitar. ;)
The Les Paul Studio continues to be a top seller for Epiphone. I posted about this earlier today.

Great video review..mind if I add it to my blog?

Yeah go for it. Just don't make fun of my hawaiin shirt!
--Zack