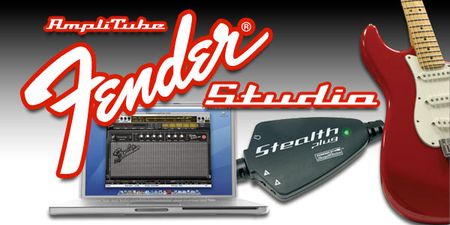 I'm always eager to try out the latest in computer software and hardware for guitar players.  As the PC has become more powerful, it's now able to handle more complex sound modeling and recording than ever before.  As a result, there are some great products out there for guitar players willing to boot up a computer instead of an amplifier.  And a lot of these products are now focusing on ease-of-use, so you don't have to be a computer expert in order to make things happen. 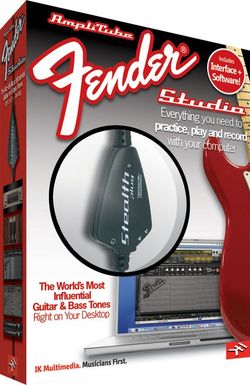 One such company, IK Multimedia, has developed the innovative line of AmpliTube modeling software in conjunction.  Their latest release, AmpliTube Fender Studio is made in conjunction with Fender to recreate some of the classic sounds of Fender amps and effects.  Fender Studio provides a basic software set up that runs on both Mac and PCs along with their "Stealth Plug" that allows you to plug your guitar directly into a standard USB interface.  It's a full 9 foot cable giving you plenty of room to maneuver and uses built-in low-latency ASIO and CoreAdio drivers to ensure high quality sound.

While the Stealth Plug is indeed smaller than competing connectors from companies like Line 6, it still looks a bit like your guitar cable has swallowed a mouse.  But overall, it works, and as a result of the small size, it's a practical package for those who travel and want to bring a guitar and computer with them, without hauling around a lot of extra gear.

I tried out the Fender Studio package on a Windows Sony Laptop.  While the computer did a surprising reboot once after I got everything installed, overall the product works as advertised.  It's surprisingly easy to tap into various Fender amps and effects.  And you can immediately start jamming with the included RiffWorks T4 recording software.

The Fender Studio puts four classic Fender amps, five cabinets and a slew of effects at your finger tips faithfully recreating the front panels with all their nobs and dials.  If you're already familiar with Fender amps, then this makes it a snap to try out different sounds.  You've got the '65 Twin Reverb, SuperSonic, a full on Metal Head amp along with a bass amp and various fuzz wah, echo and chorus effects. In short, there's a lot of settings you can experiment with.  IK Multimedia also offers a broader range of a dozen Fender amps in their more expensive AmpliTube Fender package including the Fender '57 Deluxe, '64 Vibroverb, '65 Deluxe Reverb, Champ, Bassman, Proj Junior and others, but even what's supplied here is plenty. 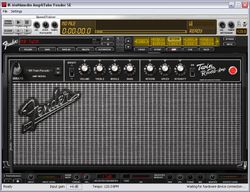 There are some great settings built in for classic rhythm and lead sounds and you can customize just about anything to get exactly what you want.  But given so many settings, it's easy to get lost among all the tweaking.  But hey, that's half the fun with this kind of a package!  If you're trying to recreate the distinc Fender sound without spending a fortune on amps, software is the way to go.  Obviously you're not going to get the same kind of oomph from a computer as you get from a tube amp, but for recording and experimentation, it's incredible.  And unlike a lot of modeling amps and software that emphasize the overdriven metal sounds, Fender Studio has a lot of clean settings that are perfect for classic rock, blues and jazz.

For $100 street price ($139 list) AmpliTube Fender Studio is a good deal.  The software or the Stealth Plug itself is easily worth $100, so you can consider that you're buying the software and getting the Stealth Plug free, or vice verse.  There are only a few areas I think IK Multimedia could do a better job.

First of all, the Stealth Plug is a bit fiddly.  It's solid enough, but you've got to make sure your headphones are plugged in properly before you're going to hear anything.  Secondly, it installs driver software that automatically loads when you turn on the computer, something that always makes me nervous on a PC.  And finally, the version of RiffWorks T4 that they include, is basically a free fully functional demo version rather than the more feature-filled standard edition.  Since you can download the T4 free from their web site, this is just a convenience for those with slow internet connections.  Personally, I think RiffWorks is one of the best pieces of software to show off what's possible with IK Multimedia's modeling package, so it's a shame that they don't include the full version.  But still, at $100 for the whole package, it's a heckuva good deal and I can understand that at that price, they can't afford to give you the whole kitchen sink.

IK Multimedia has also announced a series of free Guitar Recording Master Classes this summer through the US and Europe as well as an online web event.  It's a great way to learn more about digital recording and see what's possible with computer software.

Below is a great video demonstration of the full blown AmpliTube Fender package so you can see and hear how easy it is to use to get just the sound you want by experimenting with different classic Fender amps and settings. (Note that not all of these amps are included in the lower priced Fender Studio package.)