In my quest to have guitars stashed at relatives houses around the country, I picked up my best bargoon yet: a $100 Strat in Scottsdale, Arizona.  Ok, it's a slightly used Squier model made in China.  But for the price, I think this is the best of my cheap guitars so far, with better action and playability than the Epiphone SG 400 or the Epiphone Les Paul.  Finding the right guitar wasn't easy though.  It took a couple of hours of trying out every cheap guitar in the area before I settled on this particular one.  And admittedly, you can buy a garden variety Squier Strat for around $200 new, but I decided to see how low I could go by buying used. 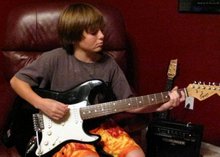 My expectations were admittedly pretty low given the goal of keeping this on the low-end of the budget.  Since I was keeping this at my brother's place, it was likely to become the adopted guitar of my two young nephews who were graduating from Guitar Hero to real guitar.  But I'm quite impressed with the quality of this guitar.  It's got the classic Strat sound with three single coil pickups and an easy to play neck.

Unlike the earlier Squier Bullets, the more recent Squier Strats are of decent quality and certainly a good value.  Of course, buying used has its risks.  You need to test out the guitar and make sure there's nothing wrong with the neck, action and electronics.  But if you don't mind spending an hour or two time trying out different guitars, you can sometimes get lucky.  You'll need to venture beyond the usual Guitar Center store in order to get a great deal. And if you're not comfortable testing different guitars, make sure you bring someone with you.

I walked out of AZ Music with the Strat, a cheapo Behringer practice amp and a strap for a total of $150.  If you're looking for a cheap guitar, you could do a lot worse than a slightly used Squier Strat.  Especially if you've got kids who want to try out a real guitar.

Update: Here's a video of my nephew Cameron, a year and a half later, talking about what he likes about the Squier Strat.  He's not an expert on Strats, but he's pretty enthusiastic about it.

Sometimes quality has nothing to do with price. Ok, in most of the cases price tells you about quality but sometimes price means brand and fancy things. Congratulations for your new guitar!

I told you, you should check also the $77 Harley Benton Fender copy, I think that for the money you can not ask for more and it gives you a lot more than the money you pay for it. Give it a try!

Having owned some of the most sought after guitars ever-- like a '59 Strat and '59 Les Paul, price has little to do with anything in my book. A guitar has to play well (like .009s 3/64 off the 12th fret), stay in tune, sound good... and if you like the color then it's really great buy. I have found knock off Strats that are amazing for $80. Conversely, I have played thousands of crummy American Fenders and cheesy Gibsons that I wouldn't give a nickel for. Usually it's the cheap tuners or cheesy output jack that make me crazy on inexpensive guitars. Currently I own a couple Mexican Fenders that sound better then most of the American ones do at 3 times the price. I also have 2 Epiphone Les Pauls that are every bit as good as my 1960 Gibson. My Gold Top Epi sounds phenomenal with those Chinese P-90's. I like it beeter than the real thing.

All that is to say, if you look long and hard, you'll find treasures for well under $500 in just about any large guitar store.

Check out SX guitars as well, these Strat clones
are considered even better than Squier by many.
Bought a 3/4 size SX SST57 for my six year old son
and was very impressed, very playable out of the box.
Like this one, but 3/4 size:
http://www.rondomusic.com/sst573ts.html

Thanks. I have heard good things about RondoMusic. They also have some very cool "Beatle basses" at good prices.