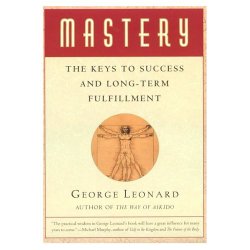 A while back I read an article on Robert Renman's terrific Dolphinstreet guitar web site called "Play Like a Pro in No Time."  I know Robert's no BS artist; he's a serious guitar player, a web developer and a dedicated marathon runner.  He's a guy who's serious about his craft.  So naturally, there is no short cut to learning guitar; it takes hard work and discipline.  Robert mentioned a book called "Mastery: The Keys to Success & Long Term Fulfillment" written by George Leonard in 1992.  Since I was interested in learning about learning, I decided to pick up a copy on Amazon.

The book's central question is: what is it that sets apart mere dabblers from those who are truly masters, whether in sports, business or the arts?  After all, if you could unlock the answer, then you could develop a blueprint for improving performance.  And that's exactly what Leonard set out to do.

While the book could be dismissed as "self help" fluff, Leonard took an in-depth look at how people learn and develop skills. The results are fascinating and at-odds with the normal "quick fix" approach that is prevalent today, whether in books like "Learn Java in a Weekend," online guitar lessons or fad diets.

Leonard describes the stages people go through in learning and what sets apart the masters from the hackers, the dabblers and the obsessives.  A key take away is that learning (or more aptly, accomplishment) is based on achieving a series of plateaus, each of which may have the occasional setback.  With dedicated practice (and hard work) you occasionally break through to a new level, which is yet another plateau. Mastery is based on loving the practice of what you're doing and accepting that there will be long plateaus, occasional setbacks and perhaps rare breakthroughs.

As I was reading the book I was thinking back to my experience as a marathon runner. If you've ever run or even witnessed a marathon, you may be surprised to see the variety of runners shapes, sizes and ages at the finish.  But they all have perseverence and a love of running.  Even though I managed to run quite a few marathons, I never thought of myself as having any particular natural talent or ability.  But if you do enough running, and challenge yourself occasionally, you will become quite good at it.

I also hit my share of plateaus over the years.  For a while it seemed impossible to break a marathon time of 3:30 due to repeated injuries.  But I changed my training, pushed harder and ultimately was able to break through, qualifying for and running Boston Marathon a couple of years ago. While it took a lot of time commitment for early morning runs, speed work outs, and weekend long runs, the running itself was never a hardship. I loved going out and running 15 or 20 miles; for me it was meditative.

Last January, I decided to apply this "brute force" marathon approach to learning guitar, where I've been a "hacker" for 20+ years, never really pushing myelf and never breaking out beyond the basics.  So I decided I would play every day --even if it was just 15 minutes of scales.  I also realized I needed to put some structure in my learning and try new things.

After reading Leonard's book, I realize this "brute force" approach is more appropriate than I thought.  As long as you love the practice and stay committed to learning and improving, you will develop mastery.  In guitar, guys like Michael Angelo Batio, Sonny Landreth, and Kirk Hammett, may have had some innate abilities early on, but they sure as heck loved what they were doing, put in the long hours to hone their skills and had the humility and wisdom to never stop learning.

As part of my curriculum, I also decided to get off my butt and buy some instructional DVDs.  I didn't want to get some superficial course with a bunch of infomercial phoney-baloney hype.  I wanted something that was proven, that would give me a mix of skills and knowledge so I could keep learning.  It's not about learning riffs, it's about developing a framework for continuous improvement.

I decided to order Doug Marks' Metal Method course.  It's been around for 25 years, has an active online forum and Doug seems to be a patient instructor.  (I'm not a metal head, and the course is more about classic rock than hard core head-banger stuff.)  I'm not through the entire course yet, but it's helped give me a context for what I'm learning and how the pieces fit together.  And it's giving motivation to play more.  So far, so good!

Its amazing how true the plateau, setback, breakthrough series of events really holds true. I am no where near a level of mastery of guitar but theres nothing better then setting the guitar down one night knowing youve progressed to a higher level with playing. Might have to pick up that book!

Excellent post. I read "Mastery" about a year ago and loved it. I agree that it comes dangerously close to "self help fluff" but there is a lot of truth to what Leonard's saying.

Also really dug the marathon analogy. As a guitarist who runs (not nearly as often as I would like!) there are a lot of discipline things that carry over into practicing guitar.