Prepare for U2 Hype Fest 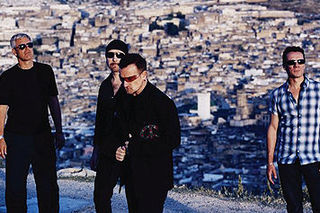 " March 3 and you can see the signs everywhere.  They signed a $25 million 12 year "360" contract with Live Nation last year and started doing more interviews over the last couple of months.  They've released a new single, the underpowered "Get On Your Boots," and they've booked five nights on David Letterman to coincide with the new CD.  And if that's not enough, Bono is writing a regular editorial for the New York Times.  I expect to see Bono on the cover of the upcoming Sports Illustrated swimsuit issue any day now.

I just hope the rest of the CD is better than the first single.  "Get On Your Boots" seems anemic to me.  I saw U2 on their Elevation tour a few years back and it was awesome.  So lets hope this CD leads to another great tour.

Update:
According to a story from The Business Insider, it seems that the new U2 CD may have been leaked, perhaps inadvertently, by the band's label.  From the tracks I've heard, this is a very good album, but admittedly a bit spacier and mellow than other U2 albums.

I have to agree with you, I didn't think much of "get on your boots" either, in fact I have lost interest in U2 over the past few years, I love their old stuff, but I am a still a fan, perhaps the new album will revitalise my passion for them. Cheers!

Vibe: sorry but you can 'hope' all you want about U2 but these guys are past their prime. Want evadence:

-the big U2 movie last year flopped before anyone even knew it had been released
-big coffee table vanity book 'U2 by U2' is sitting in delete bins at book stores selling for less than it costs to manufacture
-no U2 tracks on Guitar Hero or Rock Band (another missed opportunity to join the 1990s)
-all these big promo events like Letterman and New York Times are aimed at square 40-year olds who can cough up big money for concerts, but not for the kids

Hey I like U2 but I think the kids barely even know who they are.

Immitation Bono-dude,
if your kids don't know who U2 is then whose fault is that? You have obviously failed as a parent.

But you can make good by springing for some of those discount U2 books. The real Bono needs another pair of snakeskin platform shoes, dig?