Playing for Change: Stand By Me

I picked this up via Twitter and thought it was a nice message for Christmas.  "Playing For Change: Peace Through Music" is a documentary film that illustrates musicians from around the world playing music.  The Playing for Change foundation is currently raising money to fund the development of the Ntonga Music School in South Africa.

It's  a nice rendition of the classic Ben E. King song, though many may be more familiar with John Lennon's version.  If you want to play along, you can find the guitar tabs at GuitarWorld or in GuitarPro format on TabScout. 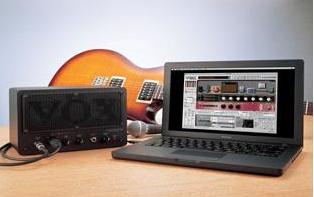 Every few weeks it seems there's some new product announcement that uses guitar & amp modeling.  I reviewed RiffWorks last week and they've got a new 2.5 version out already.  Gibson has a new Dark Fire guitar with automatic tuner, so-called Chameleon Tone and a cool digital breakout box.  Vox has the JamVox desktop amp (shown above) with software for amp emulation and guitar extraction (so you can isolate the guitar part to any song.  Peavey has a new brand of modeling amplifiers, the almost vowel-less Vypyr which appears to be sold out in many stores. Presumably they scrimped on vowels but not on cool effects.

Line6, the grandaddy of modeling, continues to come out with new products extending their lineup in all kinds of directions with the PodStudio recording interface, SpiderJam combo amp with built-in backing tracks and  M13 Stompbox Modeler.

No doubt the modeling market is getting more competitive and that will drive innovation from many companies, which is a good thing for all of us guitar players and wannabes.  In the coming year, I'll try to take a look at some of these new products.   If you've got experience with any, let me know.

In the mean time, take advantage of Musician's Friend's rebate code to save some $$$ on what you really want at Christmas this year.  Use the promo code MF23 at check out to get up to $75 instant savings if you spend $500.  If you spend more than $250 you'll save $35.  No doubt there's some restrictions here, but still, it's better than nothing...  Good until Dec 31.

Have a rockin' Christmas and let me know what you're looking forward to in new gear in the new year!

The Part's On Order (or Tall Tales from Fender) 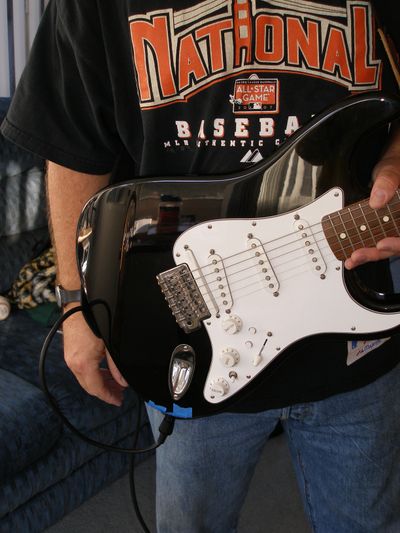 This is from a buddy of mine, Garry, who's a semi-pro musician in a local bay area band and suffering at the hands of what sounds like pretty shoddy customer service from Fender.  Or maybe Roland.  Or both.  I've written about loads of different Fender guitars on this site, and never seen this type of problem.  Still, Garry's out gigging every week using one or another of his 11 Fender guitars, so you'd think they'd want to have a happy customer.  Here's his tale...

I hate the thought of my first story to be a saga about waiting for a replacement part for one of my guitars, but here it is.  I have a Fender Roland-ready Stratocaster that I use as my main guitar in the band I play in. We play about fifty gigs a year. At a gig in late June, the guitar fell and the mounting bracket that holds the 13 pin jack in place broke. I made it through the night using blue tape to hold the jack in place.

The following week, I took the guitar to an authorized Fender dealer, CB Perkins, to show them the part and get a replacement or two ordered. The repairman told me it would probably take four weeks. After about six weeks I called the dealer and was told that they were still waiting! Meanwhile, I’m still playing gigs with blue tape holding my cord to the guitar. A real hillbilly look.

I have been waiting for this part to arrive for months and taping the guitar is getting old. I saw an ad for a used Roland Strat on Craig’s List. I bought it figuring that when the part finally arrives, I could install it and sell the other guitar for what I paid. Right now I have a nice guitar without an input jack. 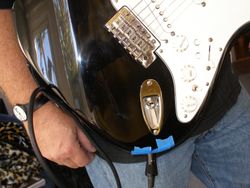 At the three month mark I decided to write Fender and file a complaint. I told my story and gave the necessary details. The Fender rep wrote back saying the part was shipped July 11th. It turns out that they sent the 4 screws instead of the actual mounting bracket. Oh boy! The Fender rep told me the correct part was going to be sent right away.

Another month went by, making it four months and still no part. Again I wrote to Fender and now I’m told that there’s a back order on this part. Presumably guitarists all over the country are waiting for Roland to deliver this part! Unbelievable.

Now, I’m not a big name musician playing in arenas, but I play a lot of gigs and I expect my equipment to work properly. And I would expect two companies like Fender and Roland to have their stuff together enough to be able to supply the average player replacement parts in less than six months.

What do you think?  Is Garry asking too much? Or should he just buy more blue tape?  Anyone had any similar problems dealing with Fender?  Somehow, I can't help but think Jeff Beck gets better treatment than the average musician.  Post comments and let me know what you think...

The good folks over at PalmGuitar have a holiday promotion on their latest V2 composite travel guitar.  I've been using the PalmGuitar for a while and I think it's one of the best designed guitars around.  It uses a short scale to achieve it's compact dimensions, but there's no compromise in the design, quality or components.  It is one awesome travel guitar.

Now you can get it for $100 off.  Plus free ground shipping.  And you can split it up into 4 payments, which is a good way to, ah, stay under the radar of those who might not understand the power of Guitar Acquisition Syndrome.  The perfect gift for anyone who spends a lot of time on the road.  Including yourself!

Update:
I've added a video from YouTube that illustrates the value of the PalmGuitar quite well.

If you managed to see Eric Clapton's Crossroads: Guitar Festival 2007

DVD, then you saw Jeff Beck armed with a classic white Strat rip it up and steal the show. Considering that this was a who's who of guitar virtuousos, it was pretty impressive work.  (Ok, Bill Murray was pretty good also.) 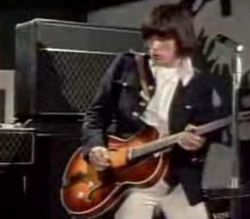 If you're a guitar fanatic and not familiar with Jeff Beck, here's a quick history.  He played with the Yardbirds at 21, replacing Eric Clapton, and later joined by Jimmy Page.  Movie buffs may recall a classic scene from the 1966 David Hemmings / Vanessa Redgrave film Blowup in which Beck smashes his guitar into his Vox amp during the Yardbirds song "Stroll On."  After he left the Yardbirds, he formed the Jeff Beck Group with Rod Stewart on vocals and  Ron Wood on bass.  He's recorded more than a dozen albums over a wide musical palette of blues rock, fusion, jazz --you name it.  And oddly enough, 3 decades on, he's still one of the unsung guitar heroes.

Beck has released a new live CD "Performing This Week...Live At Ronnie Scotts

" which may help give more visibility to a guitar player who surely deserves it.  The CD collects the best songs from a five night gig at London's famous jazz club.

This CD is a great introduction to a renowned guitar player.  If you're looking for one instrumental guitar album to add to your collection, this could be the one.  It's pretty amazing to hear the range of emotions and sounds that Beck's able to coax out of a guitar.  And he does it all without a effects.  Heck, he doesn't even use a pick.  As Eric Clapton has said about Beck "It's all in his hands."  The CD starts with "Beck's Bolero" gets into some slow burn blues, monster movie space sounds, reggae, rock, metal, and then a climactic rendition of The Beatles "A Day in the Life" as the penultimate song.   It's not a conventional rock & roll record by any means, but if you want to get to the core of what makes guitar great, Jeff Beck illustrates the point better than anyone.  You can listen to a live stream of "Cause We've Ended as Lovers" online.

Beck doesn't tour much, so "Live At Ronnie Scotts

" may be the next best thing.  And there's also a live DVD

available.  To hold things in place until the next tour, here's a live version of "Goodbye Pork Pie Hat / Brush with the Blues" from 2006 via YouTube.

" from Nu Groove Records produced by Brian Tarquin.  It's a slightly smoother, jazzier take on some of Beck's songs featuring the likes of Doug Doppler, Greg Rapaport, Howard Hart and Chris Mahoney among others.

Woz and the Robot Guitar 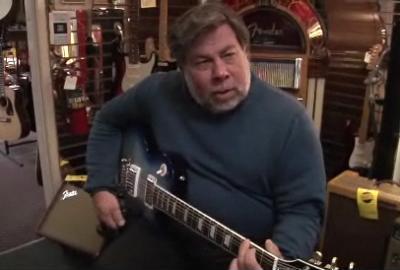 Considering you can get an electronic tuner for under $20, Gibson Robot Guitar seems like overkill to me.  But if you're a pro musician or have more money than you know what to do with, maybe it's not an issue.  You can watch a video of Apple co-founder Steve Wozniak trying it out along with his Segway over at LiveScience.  Or check out the overview from YouTube below.

I'm all for guitar gadgets, but I think it may take another year or two before this technology becomes cheap enough to be within reach of most guitar players.  But if you're Eddie Van Halen, it could be essential.


Coldplay wrapped up their 2008 US tour in Phoenix last week, where I was on hand to take it all in.  My wife is a much bigger Coldplay fan than I am, and if it weren't for her, I probably wouldn't have gone.  It's pretty hard to miss Coldplay, especially with their radio friendly hooks and catchy melodies.  Live, they're even stronger.

We missed the opening act, but did catch the somewhat boring trance DJ with his mega bass and various blips and beeps set to acid-induced Dr Seuss cartoons.  Maybe this could be good background music, but I didn't think it really matched the vibe for a Coldplay concert.  When Coldplay took to the stage after an opening waltz, it was a whole different show.  Singer Chris Martin was a whirling dervish, spinning around on stage, leaping, dancing, singing, playing guitar and piano with boundless energy.

" as well as older albums like "X&Y."  While Coldplay's set list doesn't change much show to show, it included most of the big hits like "Clocks" (my wife's favorite), "In My Place," "Fix You," "Viva La Vida" and of course "Yellow" to end the show.   For my nephews who were attending their first ever concert, it was a great introduction.  There were lasers, big screens, sing-alongs, and cool videos.  It was also nice when the bend went onto a smaller "techno" stage that put them closer to the audience.  And in the second encore, they played a short acoustic set up in the stands.  I managed to get some decent photos as well as some video of the show which you can view on PicasaWeb and YouTube respectively.

While this is likely sacrilege to the fanatical Coldplay fans, I don't think they are in the same league as U2 and other top-notch arena rockers.  But it was still a very good show with a lot of upbeat music and well worth seeing.  I think it could use a bit more guitar, but hey, this is GuitarVibe, not PianoVibe, right?  For those interested, "Viva La Vida

Note: For some reason, YouTube wouldn't let me post a video of Chris Martin playing a solo piano to rendition of "The Hardest Part."  If anyone has a suggestion of another place to post this, let me know.  It's a great video and I'd love to share it.