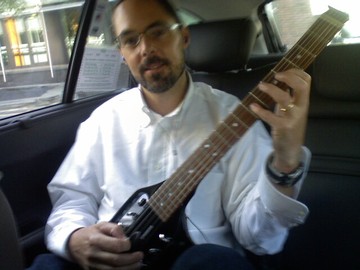 I've been using a Speedster Traveler Guitar for a couple of years now.  It's not the best guitar in the world, but I travel a lot and when I'm on the road, it's much better than no guitar.  I've never had to check it, but I've come close to having to choose between my laptop and my guitar a few times in Europe.  However, the guitar definitely takes a beating.  Last trip, it fell on out of the overhead compartment on some guys head.  Twice.  ("Dude, quite messing with my axe!")

I try to play guitar every single day, no matter where I am.  So I've played the Speedster in taxis, on planes, early in the morning waiting for meetings, whatever.   If my flight is late, I just whip out my guitar, plug it into a Pandora headphone amp, pop on some headphones and I'm good to go.

But there are a couple things that bother me about the Speedster.  Mostly it just doesn't have the quality construction I want in a guitar.  The sustain is mediocre and the tuners don't hold that well.  And even though the Speedster is pretty compact  (28" long) and light weight (4 pounds) because of it's headless design, I can't help but wonder whether I could get something just a bit smaller and more durable.  Ideally, something I could put inside my suitcase when I'm on the road.

Obviously in this kind of package, you've got to compromise on something.  For the price (under $500), the Speedster is pretty darned good and I can recommend it to anyone who wants to get more playing in.  They also have a few different models to chose from, including the EG-1 which has better quality components and a built-in headphone amp.  But I'd like to get something with higher quality components and a shorter overall body size.  And I'd be willing to pay more.

PalmGuitar has an interesting take on things that gets rave reviews from their customers.  They've got a high quality electric guitar with a 20.2" scale, smaller even than a 22" scale mini Fender for kids.  While that's not as small as a Lapstick which has a 17" scale, you can tune it like a standard guitar (EADGBE), making it easier to adapt to.  But unlike the Traveler Guitar and the Lapstick, the Palm Guitar has a conventional headstock, which means despite it's shorter scale, end-to-end it's just two inches shorter than the Speedster.

If only there was a way to get the best of all of these.  Maybe what I need is a custom headless guitar with better components and a shorter scale.  Has anyone experimented with a custom travel guitar?  Should I upgrade the tuners on the Speedster?  Anyone used a Traveler EG-1 or the PalmGuitar?  Let me know your thoughts.

Why not a Steinberger? Now that you're not roped into double-ball strings, they're looking pretty attractive. According to their site: "Provided with a premium, padded gigbag, the Synapse also makes a great travel instrument measuring only 31.75" in length and capable of fitting into the tightest of places including overhead airplane bins."

Thanks.
Yeah, the Steinberger is a great guitar. In fact, my Steinberger Spirit is my favorite axe. Definitely better construction than most travel guitars. But it's also bigger and heavier than you would want for overseas travel. The speedster is nearly half the weight and a couple of inches shorter.

Just stumbled across a press release about Ministar. Don't know much about them, but they are aiming for your market here.
http://www.ministarguitars.com/

Hi, if you are still looking I can recommend you take a look at the Swiss made TheBONE guitars. They have an incredibly innovative dtachable steel frame, look and sound amazing and will do everything you say you are are looking for.
I sell both Traveler and TheBONE and I really love the Speedster but TheBONE is a step up. Think "Swiss Army Knife".
Take a look at www.playawayguitars.com and you also have links to the manufacturer.
I think its what you are looking for!
Regards, Patrick.

Thanks. I have heard of TheBone and it looks interesting but very spartan!

Personally use Steinberger XT guitar for travel. it's inexpensive and very playable.

Wow, BONED is what I would feel like after paying 899 pounds sterling for that

just ordered a Stowaway, looks perfect for my needs, as I travel often.