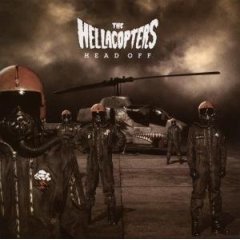 One of my favorite rock bands from Sweden, The Hellacopters, is splitting up.  They've recently put out their seventh and final album, "Head Off" and announced that it's their final tour of Europe.  I doubt they'll make it back to the US since they've never had as big a following over here as they deserve.

The Hellacopters hold a special place for me as I discovered their music about 3 years ago on a business trip that left me pretty much stranded in Stockholm on a holiday weekend with a broken laptop and not a lot to do.  I bought 3 of their albums including the newly released "Rock & Roll is Dead" and was blown away.  And that's when I wrote my first blog post on GuitarVibe.

"Head Off" is a good album, but it must be noted that it's an album of cover songs.  The band picked songs that they felt were in the style of The Hellacopters, but somehow I can't help but wish they had mixed in a few original songs for their final send off.  Hopefully they'll shoot some more video to capture their final tour this fall. Meanwhile, I'll see if I can figure out some way to catch one of their final shows.  Here's a clip from YouTube of "In the Sign of the Octopus" originally performed by The Robots.