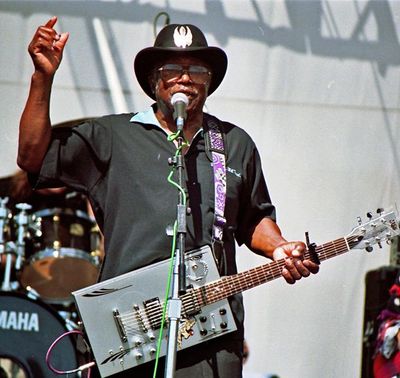 Bo Diddley, the only guitar player to have have a beat named after him, passed away at the ripe old age of 79.  Bo Diddley pionneered the driving hambone rhythm that defined classic rock and roll in songs such as "Mona," "Hey Bo Diddley" and "Who Do You Love?"   The Bo Diddley beat, as it became known, was an influence on rock artists as diverse as Buddy Holly, The Rolling Stones, The Who, The Grateful Dead, U2, Elvis Costello, Bruce Springsteen, and The Clash, with whom Diddley toured in 1979.  And lets face it, even if you can't play 3 chords, you can play the Bo Diddley beat and still sound good.

Diddley was famous for his self-referential songs, humorous lyrics and his trademark Gretsch box-shaped guitars.  He recorded more than 30 albums of material from 1958 to 2002 and continued touring through May of 2007 when he suffered a stroke.  He was inducted into the Rock and Roll Hall of Fame in 1987, and later into the Rockabilly Hall of Fame and the Blues Hall of Fame.  Diddley was recognized by Rolling Stone magazine as #20 in the list of 100 Greatest Artists of All Time.

Diddley was recognized along with Chuck Berry and Little Richard as a key innovator in developing early rock and roll, though he was sometimes embittered by his lack of financial success.  He won a lawsuit against his manager in 1994 for $400,000 in back payments and later sued Nike for unauthorized use of his likeness in a their "You Don't Know Diddley" campaign that ran from 1989-1991.  I don't know whether Diddley made any money from Nike, but he deserved better than he got.

So tell me, who do you love?  Bo Diddley.

Nice tribute, and so many of the pioneers of blues/rock never really got their dues or were appreciated the way they should have been.

Playing their emotions and their lives was their passion and thats what made so many greats!