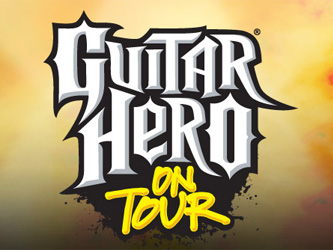 In the all-out battle of the bands in video game land, it looks like Activision's Guitar Hero is stepping back into the ring this fall --along with drums and a microphone --to do battle with Rock Band.   The drums kit, sporting two crash cymbals, appears to be a bit more complex than RockBand's.  They're also velocity sensitive; so the harder you hit 'em, the louder they are.

Guitar Hero World Tour also promises the ability to record your own singles, though no one really knows what that means. Oh, and in case you didn't guess, Guitar Hero World Tour is incompatible with existing RockBand gear.  So choose wisely!  Check out the promo trailer courtesy of YouTube along with videos of real drummers Stewart Copeland (The Police) and Chad Smith (Red Hot Chili Peppers) wailing away on plastic drums.

Blues legend Jimmy Thackery played this weekend at the Santa Cruz Blues Festival as well as a Saturday night show at Moe's Alley.  Thackery made his name with the Nighthawks in Washington DC, and branched out on his own in the late '80s.  He's played with the likes of Buddy Guy, Muddy Waters, Otis Rush and James Cotton and developed his own raw guitar style that combines a range of influences, whether its Texas Blues, R&B or good ol' roots Rock & Roll.

Now touring as a power trio, Thackery and his worn-to-the-wood Stratocaster are center stage.  Let's be clear: he's a guitar god.  But not just in one genre.  In a 3 hour set, he's pulling from every musical style.  Whether it's a soulful cut like "Dazes in May" that would not be out of place in a 50's surf combo to "Solid Ice" that sounds like it belongs on Pink Floyd's "Dark Side of the Moon," Thackery does it all.  He's getting a symphony out of his Strat, playing rhythm, melody, fills, soaring leads and insane guityrotechnics in homage to Hendrix. I don't think he broke into a sweat all night.

By Saturday's gig, Thackery's vocals were a bit rough --he sounded like he'd been run over by the Marlboro Man.  But most of the show was instrumental, which was just fine for the legion guitar fans.  Drummer Mark Stutso did a fine job on vocals for a number of rock and blues numbers.  Overall this was the best gig I've seen all year.  Thackery and his trio are touring through the summer hitting major festivals and blues clubs around the country.

I've posted some photos and video on PicasaWeb and YouTube.  Unfortunately the video came out a bit grainy since the lighting wasn't that good.  If you were at either of his shows in Santa Cruz this weekend, feel free to add comments to the blog and let me know what you thought.

Check out the "Essential Jimmy Thackery" on Amazon. 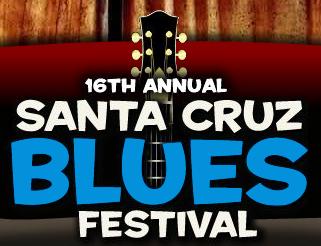 This year's event is Saturday May 24 and Sunday May 25 featuring the legendary Al Green, Hubert Sumlin, Pinetop Perkins,Willie "Big Eyes" Smith, Coco Montoya, Mighty Mike Schermer Allstars, Bonnie Raitt, The Boneshakers and The Subdudes, among others.  It's a two-day event and tickets are available for Saturday and Sunday for $60 or both days for $110.  The event is held at Aptos Village Park opening at 10:00 am with shuttle bus service from Cabrillo College.  Note, there is no parking at the festival site.

I had the pleasure of seeing Chris "Kid" Andersen and his band play at San Francisco's Biscuits & Blues club last week.  Biscuits & Blues remains one of my favorite clubs in the bay area.   It's a good location in the city, great live music, friendly staff and and good spicy southern food.  Kid and his band played a number of original songs as well as some traditional numbers, ranging in style from slow burning blues to some more rocking numbers as well as a few humorous songs from his CD "Rock a While" and his most recent CD "Greaseland."  Kid has a great stage presence and was funny as heck in his between-song ramblings.

I managed to get some decent photos as well as some video with my trusty Cannon G9 which I've posted on PicasaWeb and YouTube.

Kid and his band are at Biscuits & Blues the first Tuesday of every month.  Or if you're in Norway and have a time machine, watch for an extensive tour in June... 2006.  Hmmm... I guess Kid needs to update his web site.

Get the Led Out!

Normally, I'm pretty skeptical of tribute CDs.  Who wants to hear a bunch of covers of classic rock songs that are usually inferior to the originals?  So I was pleasantly surprised --ok, more like blown away-- by a Led Zep salute called "Get the Led Out" issued by Bohemian Productions (BHP Music).   Bohemian Productions is an artist-run label headed by instrumental guitarist Brian Tarquin.  The label includes a range of prog-rock guitar virtuosos such as Chris Mahoney, James Ryan, Steve Morse, Allan Holdsworth, Zakk Wylde and others.

"Get the Led Out" features a dozen classic Led Zeppelin tracks plus 4 bonus tracks featuring Jimmy Page.  What makes the CD really shine is that these are all instrumentals re-interpretations.  Now you might never have wondered what the heck Led Zep would sound like without Robert Plant, but if they were prog rock instrumental band as envisioned by Brian Tarquin, they would sound pretty amazing.

Chris Mahoney starts the disk off with a rockin', stompin' version of "Whole Lotta Love" that is every bit as good as the original, but still has a unique flavor.  Other great cuts include "Moby Dick" by Randy Coven and Leslie West, "Dazed and Confused" by Brian Tarquin, an inspired acoustic version of "Kashmir" by Martin Winch, and another all-out rocker "Black Dog" by James Ryan.  James Ryan's guitar work is amazing and his solo couldn't be out-wah'd if you tried.  Some of the cuts like "Four Sticks" and "Friends" seemed a bit out of place to me, but that's probably got to do more with my own tastes and preferences than anything else.

I must admit, I had high expectations for the bonus tracks and was a little disappointed upon first listen.  Musically they are awesome; Jimmy Page's playing is as good as ever.  But three of the tracks have vocals by David "Screeming Lord" Sutch, and lets just say there's a reason Robert Plant did the vocals in Led Zep. Sutch's style is more suited to garage band than classic rock and he is clearly outmatched by the rest of the band.  Still as a bonus they're worth checking out.  And the final track, "Burn Up," with Keith DeGroot on vocals, is a great addition and an interesting musical departure for Page et al.  It would be interesting to get a few cuts from this session.

"Get the Led Out" is a testament to the lasting power of Led Zep and the versatility of the music.  Overall, it's a must-have disk for Zepellin fans; and if you're a fan of prog rock, it's doubly good.  In an upcoming post, I'll take a look at BHP's "Guitar Masters Vol. 1" CD.

Update:
Also, sideways media has announced a drawing where you can enter to win copies of both "Get the Led Out" and "Guitar Masters Vol. 1".  Check it out!

I still remember back in 1976 when a band called Boston came out of nowhere with a slate of hit singles: More Than a Feeling, Peace of Mind, Long Time...  Their self-titled first album became the best-selling debut in history, ultimately selling more than 17 million copies.  Boston's music was immediately recognizable with Tom Scholz's soaring melodies and huge guitar riffs combined with Brad Delp's dramatic vocals.  While the band was never prolific --it was 10 years before they released their third album --their music has never left classic rock radio.  Their 2004 release, Corporate America, was well received and included an updated, but still recognizable, sound, with vocal duties shared between Brad Delp, bass player Fran Cosmo and his son and guitar player Antony Cosmo.

Scholtz, an MIT-trained electrical engineer, recorded the demos for Boston's first album playing every instrument but the drums and chucked a career at Polaroid when the album started getting airplay.  Known as a perfectionist in the studio, Scholz racked up more then 3 dozen patents, including the Rockman family of amplifiers and effects.  Scholz is putting finishing touches on a re-mastered Greatest Hits collection and there's also the hint of a new studio album next year.

With the unfortunate passing of vocalist Brad Delp in 2007, it seemed as if another Boston tour was unlikely.  But things have now come together with Michael Sweet from Stryper and a relatively unknown vocalist Tommy DeCarlo, a dead-ringer for Delp's vocal style, who recorded tribute songs after Delp's death.

Boston will be on tour this summer with more than 40 dates in North America starting June 6 in Thunder Bay, Ontario.  Many, but not all, of the gigs will be with Styx, another blast from the past. I just learned about a fairly new company from China called Tonerider that specializes in vintage style pickups designed by Brad Ferguson as well as a new line of effects pedals.  I just recently put a new Seymour Duncan single coil pickup to replace the fairly weak EMG in my Steinberger Spirit and I wish I'd heard of Tonerider a few months ago.  I probably would have gone with their Classic Blues single coil instead.  Nothing wrong with the Duncan, but it would have been an opportunity to try something different.  They've also got "lefty" pickups coming on May 15.  Heck, I didn't even know there was such a thing!

Has anyone else used Toneriders?  The reviews look good, but right now there's not that many dealers stocking them.  Still, they appear to be well-designed and a good value.  Maybe I'll check out one of the effects pedals in the coming months.  Too bad I didn't know about these guys earlier.  Heck  I was on vacation in China last year; I could have done a factory visit!