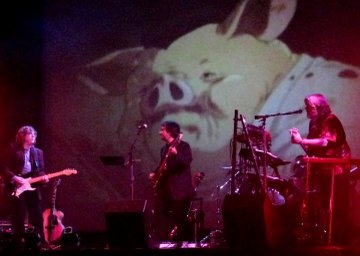 If you're among the die hard Pink Floyd fans waiting in vain for a reconciliation between Roger Waters and David Gilmour, I've got good news.  No, there isn't a reunion.  But a close approximation is on tour through Northern California with Mark Showalter's brilliant House of Floyd tribute.

I managed to catch this seven piece band at a gig in Santa Cruz a few weeks back, and they put on a smashing live show.  House of Floyd gets as close to note-perfect as any band I've ever seen --including Roger Waters' own "Dark Side of the Moon" tour last year.  The set list is always a closely held secret since it changes for every gig, but the show I saw spanned a range of early Sid Barrett-era songs all the way through "Wish You Were Here," "Animals," "The Wall," and "Momentary Laps of Reason."  And much to the audience's delight, they played "Dark Side of the Moon" in its entirety.

While it's not a stadium extravaganza, House of Floyd managed to put on a pretty impressive light show complete with lasers, psychadelic effects, video projection and, yes, a floating pig.  To my surprise, the video and effects added a lot to the ambience and impact of many songs.  It was interesting juxtaposition to see weird pig cartoons combined with video of politicians during "Pigs (3 Different Ones)."

The overall musicianship of the band was incredible.  Showalter deftly played keyboards, sax and sang his fair share of vocals.  Guitar player Pat Potter did some amazing Gilmour-inspired leads that were note perfect and soulful.  And Bill Coonley juggled keyboards, guitar, lapsteel, vocals and who knows what else.  With such a top-notch band, it's no wonder they are able to recreate Floyd's many studio hits with precision.  And these are songs that every fan knows note for note.  So its' no small feat to be able to be able to play these songs.  I can only imagine the weeks and months of practice to make these songs perfect.  And to top it all off, they brought out a children's choir for "Another Brick in the Wall #2."

Of course, how close any tribute band recreates the sound of the original depends both on musicianship and, perhaps unfairly, on the vocalist.  For 90% of the songs, House of Floyd were spot on, if a bit heavy on the reverb for some vocals.  (Hey, if it helps capture that classic sound, why not?)  However, there were a couple of David Gilmour numbers that were hard to match.  Maybe it was an off night, but Pat Potter couldn't quite capture Gilmour's vocal style on "Money," despite great guitar work and overall musicianship.  But then again, I had the same feeling at the Roger Waters concert.  I guess no one can really do Gilmour's vocals the way he can.  And, suprisingly, some moments that I thought would have been impossible to capture, like the opening drums of "Time," or the orgasmic vocals of "Great Gig in the Sky," well, those were breathtaking.

I managed to shoot about a dozen video clips from the show which I've posted on YouTube, as well as a couple dozen of the best photos on PicasaWeb.  This was the most fun I've had in ages.  So check it out.  Better yet, see House of Floyd live at one of their upcoming shows throughout Northern California.  And breathe, breathe in the air.

well, I am not a big fan of Pink Floyd but I know that nothing compares to the real thing, no matter which is the band. But sometimes, bands don't get reunited because they sell better broken apart, don't you think? A returning Floyd would fight newcomers while this way they are rulers of their world.

I am from a generation that would make me a "newcomer" to Floyd. I saw House of Floyd live - this really made me a fan where I otherwise would not have known much about Floyd. This band put on an amazing show - the talent and love for the music was obvious. I highly recommend attending a live gig whether you are a die-hard fan or new to Floyd.

I am a huge Floyd fan and when my friend-The Drumming Ape-told me he was in a Floyd cover band I was a bit skeptic.

He invited me to a show and I have been hooked ever since! Kind of a groupie. The performances are spot-on and to know the band personally is to love them. Super cool guys with a love an passion for Floyd that shines through at every show!

The band plays all over, when you get a chance to go see them-do it. You won't be disappointed.