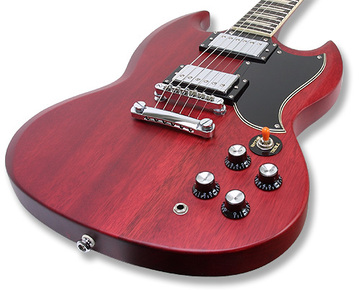 A while back I was looking for another cheap guitar to leave at my father's place in Florida.  I usually travel there a couple of times a year for a week at a time and figured it would be good to have a spare guitar there.  In fact, I probably should have done this years ago.   I decided to check out the local Guitar Center to see what was on offer at the low-end of the market.  I set the upper limit of my budget at $200.  After all, I was only going to play this guitar a few weeks every year just to practice.  Sot it didn't really make sense to buy a great guitar.  And besides, if anything happened to it, I wouldn't worry too much about it.

After trying out a number of disappointing low-end Fenders, I happened on a nice looking Epiphone SG 400 in classic cherry red. This guitar had been highly rated in recent magazine reviews.  I've never considered myself a huge SG fan, but, hey, if it's good enough for Frank Zappa, AC/DC, then what the heck.  The SG 400 is made in China and has a list price of  around $400, though it typically sells for less.  This one was marked down to $200.  The front looked fine, but upon further inspection, it was clear the guitar had suffered some kind of damage.  The back of the neck near the headstock had some deep gouges out of it.  The neck had been repaired and resurfaced, but there was about a 4 inch section where the finish didn't match.  I spoke to the clerk and he confirmed the guitar had been sent out for repair and was being sold "as-is."

Still hopeful, I plugged it in and tried it.  The action and feel where far better than any of the other guitars I tried that day.  The rosewood fretboard felt very smooth and the neck comfortable.  So what the heck.  I splurged on a cheap RoadRunner gig bag ($30) and made my way home.  I've used the guitar for a few weeks and overall, I'm happy with it.  The pickups are sometimes a bit muddy, but the neck pickup has a great blues tone.  Overall it's a very solid guitar with a nice sound, a mahogany body and excellent rock tone.  It's got quite a large headstock, which makes it a bit top heavy; something that I'm not used to.  The only real complaint is that the tuners are not the most stable I've ever used and the input jack came lose after a couple of weeks.  I tightened it a few times, but eventually resorted to glueing it in place.  Not pretty, but again, on a $200 guitar, why worry?

If you're hankering for an SG but don't want to splurge on a full-price Gibson model, the Epi comes pretty close.  It's a good value at $400 and a steal for anything less.

I am not a SG fan either, it looks too "classic" for my taste and to be honest I don't like this kind of bridges, but for $200 I guess it works.

As an other opinion, I was invited to jam with my friends at a party a few days ago, and the guy that invited us bought a couple of instruments, all brand new, all from Harley Benton, not expensive since it was a hobby and bought more. I played the guitar and I can tell you I considered fine, sounded good, it was compact and solid, not a heavy one and the overall impression was OK.

I was impressed when I came home and searched it on the internet, it was Harley Benton HBMS15BK, a copy of the original, for 77 EURO!!! I can tell you that I was amazed of the quality of it for that money. I think I would buy one for that price also :-D to have one around, since it works fine for a fast play.

A guitar in every house! Good job. Can you chat with my wife about having a guitar in all our relatives' homes. How do you do it?
Seriously, great webpage! Check in every day or so to see what you have posted.
I am not an SG fan either - but I do like the Eliot Easton model.
Cheers.

Well, I have my electric guitar for the moment at my wife's parents, an old acoustic at my mother house :-D

Well, thanks for visiting me, what do you know, I read your blog every day too :-)

Glad you enjoy the blog.

Actually, it was my wife that suggested getting the extra guitars. It floored me. Then she said, "hey, you'll have to get another amp also."

I think she wanted me to spend more time at my in-laws.

Hi Zack
Question for you...
do you have a list of guitars that you would love to own one day. I have a few on mine. Be interested in your choices and why you would like to have them.
Cheers
Clive

Man, I can't stop myself!! I feel it is the time for a small self promotion :-) I had an article about this on my blog, so please feel free to join the discussion here :-D http://www.guitarflame.com/2008/dreaming-of-a-perfect-guitar/

I've been considering and SG for some time. I like the thin body and the fact that the curve where it rests on your thigh (when playing sitting) is further back than most guitars. I'm a bit concerned that the neck is too thin for my big hands, but I haven't been able to find information on its neck width. How do you like the dimensions of the neck?

Thanks for all the comments. There's a couple of other guitars that have caught my eye recently: the new Taylor Solidbody Electrics and also Parker Southern Fly --their take on the Telecaster. But I'm not sure I'm going to be buying any expensive guitars right now. I still have a couple of cheapies to write up.