My guitar-crazed buddy Richard from London and I were able to take in this week's Redwood City Blues Jam at the Little Fox theater.  It was a rainy mid-week night and to be honest, we weren't expecting much.  But it turned out to be quite a decent night of live music and cold beer.  The blues jam takes place every wednesday night starting at 7:00 pm with a different host band and rounded out by a roster of musicians stepping up on stage for a few numbers.  This week's host band was Sinister Blue featuring the fabulous Patty Marie on vocals.  They ran through a range of blues and R&B covers including the likes of Etta James and songs like "Knock on Wood," and the crowd-pleasing "Give Me One Reason."  The dance floor was packed in just a short period of time.

There were many fine musicians stepping up on stage Stan Erhart playing his custom Erhart guitar, Pete Kelso who tore it up with new songs from his latest CD and  others.  Stan's got some upcoming gigs throughout the bay area --be sure to check him out.

If you're in the bay area, you should make this a regular venue.  The price is right (no cover charge) and the music is fantastic.  Next time I'll bring my camera and shoot some video. 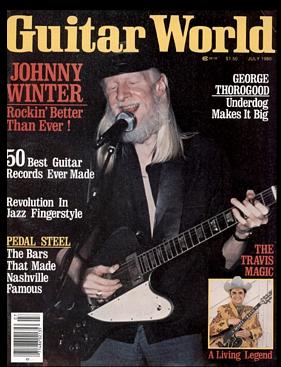 GuitarWorld magazine seems like it's been around forever.   Well, maybe not forever, but 28 years --and counting.  That's a longer stretch than most bands, other than Led Zep and a few other classic rockers.  As a tribute they posted an online version of their first issue, published in July 1980.  It was around 80 pages and cost a mere buck and a half.  But it started what has been a long running love affair with guitar players eager to learn their craft from the best.

GuitarWorld has had a pretty storied history with some amazing columnists, interviews and reviews over the years, not to mention top-notch guitar tabs (now available online).  If you wonder what state-of-the-art looked like in 1980, take a look at the online version of issue #1 complete with original ads in all their splendor.  The user interface is a bit cumbersome, but it's still a treat to see some of those big sideburns and 'staches.  Also great articles on Merle Travis, Johnny Winter and up-and-comer George Thorogood.  They've also posted their 5th anniversary issue (featuring the first of many Jimmi Hendrix covers) and promise more back issues in coming months.

Hey, how about a reprint book: "The best of GuitarWorld Interviews?"  or "Classic Rock Lessons"?  People would be thrilled to have some of this material in book form.

Cactus Tube Amps - Amp in a Can

Tempe Arizona boutique amp shop Cactus Tube Amps has launched their recent Amp in a Can portable 2 watt mini amp housed in a Heineken-inspired 24 ounce beer can.  The Amp in a Can was created by former Michael Schenker guitar tech.  Runs off a single 9 volt battery, offers clean and distorted channels and puts out up to 85 db of sound.  And if you need more than that, it can also power a cabinet.  It's available direct from Cactus Tube Amps for around $60.  Check out the 5-star review in Total Guitar magazine or the write up in Arizona's Get Out magazine. 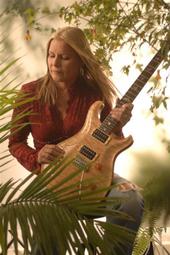 Catherine Delgadillo, guitar heroine from Santa Cruz, California, has released her first solo album "Paradise Swamp." Catherine is a superb guitar player, up there among the best jazz fusion / prog rock players I've heard.   Her new solo album is a change from her earlier San Francisco Bay area hard rock band Charade, which she fronted.  Personally, I'm more of a three-chord rock guy and I think I would have liked to have seen Charade open for Foghat back in the day.   But that was a different time and Catherine has obviously continued to develop her talents far beyond these constraints.  So I appreciate what Catherine is doing here.

"Paradise Swamp" is an instrumental album, with strongly melodic guitar playing that holds everything together.  It's evocative and richly textured.  She gets a lot of tone out of her PRS!  The guitar sound is well balanced with Catherine's keyboards, husband Kevin Delgadillo's perfectly timed and complex drumming, and no less than three different bass players.  Standout songs include the title track, "Turning Point," and "Another level."

You don't have to be a guitar nut or musician to be a fan of this music.  It's not shredding, or technical theatrics the way you sometimes find with prog rock.  If you like Alan Holdsworth and Brand X, you'll love "Paradise Swamp."  You can listen to a few of the songs on Catherine's MySpace Page.  Or better yet, just go buy the CD.

10. My New White Epiphone Les Paul -- Somehow a $200 purchase at Guitar Center (pictured above) has kicked off a serious dose of GAS -- Guitar Acquisition Syndrome.  My wife suggested I leave a guitar at my father-in-law's house in Michigan so when I travel I have a guitar there.  At this point, it's out of control and I now have multiple budget guitars located at relatives houses around the country.  I haven't even had a chance to write up reviews for all of them and I have another one on order.  It seemed like a good idea at the time.  Is there counselling available?

9.   Fender VG Strat  -- Ok, to be clear, I'm  a big fan of Line 6.  But when the giant Fender starts following Line 6's lead, that's something to pay attention to.  I also wrote about the business strategy behind Line 6 and Fender over at OnDisruption.

8. Six Pack with Marcus Ryle of Line 6 -- Line 6 has continued to be a huge innovator in guitars, amps and effects and here's a detailed interview with co-founder and VP of R&D Marcus Ryle.  Marcus is a great guy despite the accusations against him as a keyboard player.  Hey, everyone has to come from somewhere!  It's a good read, despite the fact that he wouldn't spill the beans on any unnanounced products.  I also managed interviews with Phil Neal, inventor of the Lapstick ultimate travel guitar and rocker-turned DJ Greg Kihn.  Meanwhile, still waiting for Paul Stanley.

7. Line 6 Spider Valve Amp -- Line 6 has had so many new products it's hard to keep them all straight, but to me this was the most significant.  It was a top-secret innovation that has cemented Line 6's position as the #2 Amp supplier.  Long known for their modeling capabilities, Line 6 turned it up to 11 by combining valve power from boutique supplier Bogner Amplification.  Line 6 also put out new models of its Pod and TonePort products.  But I'm still waiting for an update to the Variax line.

6. Andy Walo at House of Blues, Las Vegas -- I managed to see a lot of good shows this year by the likes of Elvis Costello, Roger Waters,  The Police, Los Lobos, Frank Marino & Mahogany Rush, Lenny Kravitz, The Smithereens, Alan Iglesias, Rod Piazza and others. (Hey, it was a good year for live music and I managed to get some pretty good photos to boot!)

But somehow, this small blues club gig was the most fun.  Maybe because I was in Vegas I wasn't expecting much, but Swedish blues rocker Andy Walo puts on quite a show.  And I'm much more of a club guy than a stadium rocker anyways. If you're in the LA area or Vegas, be sure to take in Andy Walo.

5. GuitarPro 5 -- Wanna learn a song?  Any song?  Get GuitarPro 5 and then head on over to TabScout and start downloading just about any guitar song in the world.  No guitar player should be without this.  Seriously recommended.  Ten million tab files can't be wrong!

4. Jazz Butcher at 12 Bar Club, London -- I ended up seeing this Pat "Jazz Butcher" Fish gig quite by accident while in London on business in April.  Then six months later, I'm in London once again, and head over to the same club, and there's Pat Fish once again playing his second London gig of the year and stalwart fans Nigel, Dominic and me are sitting in the exact same seats as last time.  Both gigs were awesome, but I got better photos and video the second time around.

3. Guitar Hero Rocks -- Whether it's the original, Guitar Hero II, Guitar Hero III or the sort-of 2.5 80's version for Playstation 2, this video game series has done more to reinvigorate rock music among kids than anything in recent history.  Not only is Guitar Hero redefining and disrupting the music industry, heck, it's outselling Van Halen, U2 and the Stones.  I suspect in a few years we'll see an influx of 16 to 18 year old kids who can shred like nobody's business and their first instrument will have been a plastic game controller shaped like a guitar.  If you have kids, or if you know someone with kids, or you think you are still a kid at heart, go get Guitar Hero III.  Or better yet, get RockBand, the sort-of-follow-on-with-drums by the original developers. And check out the business story over at OnDisruption.

2. Led Zeppelin Reunion -- My buddy Hans got to witness the second coming of Led Zep in London last month.  By all accounts a great gig.  Hopefully there will be a tour in 2008. 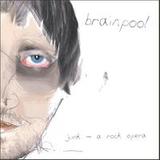 One can hope, right?

1. Brainpool Junk -- I discovered this gem earlier this year and despite the fact that it was  released several years back, I think it deserves the top position as most Kick Ass story for the year.  Yes, better than Led Zep.  How weird is that?   All I can say, is if you like 70's & 80s rock music like classic Who, Pink Floyd or The Clash, then check it Brainpool Junk.  It is the rock opera you wish you'd heard 25 years ago. Unfortunately, Brainpool has since disbanded.

...
Ok, that's my top ten list for the year.  Feel free to add your comments below on your own top ten, or better yet, worst ten rock guitar items for the year.  Oh, and Happy New Year!

Kudos to the GuitarToyBox that tipped me off to this new radical guitar design called the Handle Guitar from XOX Audio Tools.  I'd seen news about this guitar in the last year and a half, and it looks like they'll launch officially in 2008 at the upcoming NAMM conference in Anaheim.  The guitar was designed by American Peter Solomon and won the "Good Design" award from the Chicago Athanaeum Museum for its radical style.

The guitar is essentially a hollow exoskeleton made of carbon fiber weighing just 4.4 pounds.  It includes high-quality components, such as Dimarzio PAF pro pickups and a Hipshot baby grand bridge.  The end result, is this is a striking looking guitar with great tones.  But it's not a cheap guitar, with a list price of 1900 EUR.

As I've read on some of the videos "THE HANDLE-la chitarra numero UNO in futuro!!" 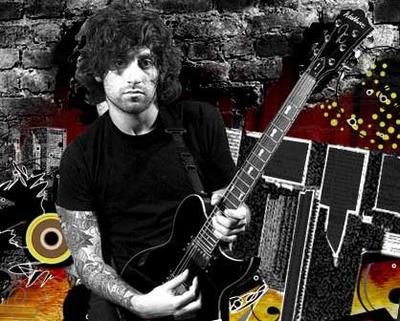 Good news for Chicago area rockers with a newly announced Washburn signature guitar designed by Joe Trohman of Fall Out Boy.  Both Washburn and Fall Out Boy are icons in the Chicago area and this looks like a match made in pop-punk heaven.

The Joe Trohman Washburn Idol is a basswood solid body guitar with a classic single cutaway body and two high-output Washburn-designed humbuckers.  It also has high-quality Grover tuners and a unique Voice Contour Control (VCC) coil-splitting system.  So you can blend beefy humbucking sounds with a spanky single-coil vibe without the usual 60-cycle hum.  This looks like a good value, and its available for pre-order for $419.

Expect more news from Washburn at the upcoming NAMM conference January 17-20 in Anaheim.   And I'll try to line up an interview with Joe about working with Washburn and what makes this guitar special.