Home Archives Profile Subscribe
Too Much Too Late
Radiohead: Name Your Price 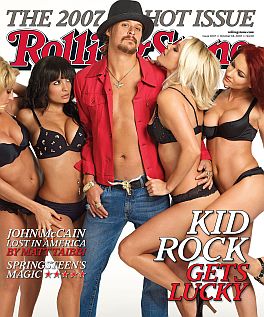 While I'm not the biggest Kid Rock fan in the world (or of Rap in general), I'm very impressed with his newest CD Rock n Roll Jesus.  It's a balls-out rock album; arguably the best of the year.  I admit, I was skeptical at first.  But it rocks hard from the opening title track and rarely lets up for air.  The songs continue to grow on me after many listens.

There's a broad range of rock songs here from the hard-rocking "Amen," "Low-life and "Guilty" to the soulfull "Roll On" with a beautiful gospel backing vocals.  (Check out the YouTube video clip below.)  "New Orleans" is a great song that could do more to revitalize that city than any high-profile tourism program.  "Blue Jeans and a Rosary" delivers a country-tinged rock balad.  With such a broad range of rock styles, no wonder Kid Rock's been on the cover of everything from Rolling Stone to Blender in recent weeks.

Maybe like my recent fave the Junk rock opera by Sweden's Brainpool, the reason is that Kid Rock's album is deeply immersed in the sounds and textures of classic 70's rock.  The CD is an homage to such legendary rock bands as AC-DC, the Rolling Stones, Bob Seger, Allman Brothers, and others.  Producer Rick Rubin has helped take Rock's energy and song-writing skills and shape them make a breakthrough album that is genuine and compelling.

There's a spooky tribute to the piano riff from Warren Zevon's "Wherewolves of London" combined with "Sweet Home Alabama" in his Bob Seger style "All Summer Long."  It sounds weird but it works better than you can imagine.  One caution: there's a lot of cursing in this album and it's a bit off-putting.  And while I have do doubt that Rock's "Half Your Age" is therapeutic for a guy who suffering the heartbreak of a disastrous high-profile relationship with Pamela Anderson, to me it's a novelty song that stands out for its lacks of gravitas compared to the rest of the album.

But these are minor quibbles in a great album.  The songs are fresh and new, not a bunch of re-hashed covers.  So forget the new Springsteen album, get Rock n Roll Jesus.  Now.

Kid Rock has proved himself time and time again,This time he has left everyone way behind and proved why he's the nation's favourite cowboy,I was so much enthusiastic to get his new album and when I heard it,From the 1st track I went flowing with the songs,I've always been a huge Kid Rock fan and This ROCK N ROLL JESUS cd has only made me a die hard fan of KID ROCK,Leave other bands just Go n GET Rock N Roll Jesus.