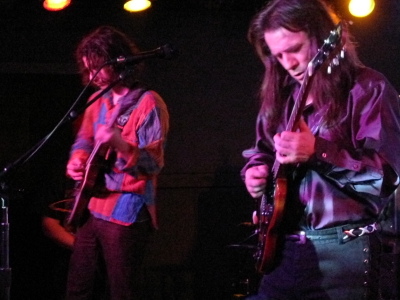 Frank Marino & Mahogany Rush played a great show at  Moe's Alley in Santa Cruz with a packed audience of several hundred people.  I last saw Frank Marino in concert nearly thirty years ago in Montreal, and he's still rocking hard and LOUD!  The audience included many of Marino's long-time fans.  In fact, they were chanting for Frank before the show started.  They were not disappointed.  Though Marino's bandmates are young, they have been well-schooled and played impeccably through the more than two hour show.  The set included several songs from Marino's classic live albums such as Hendrix's Red House, the hit single Dragon Fly (my favorite), Strange Universe, Poppy as well as great medley of She's Not There and Crossroads.

Twenty-five year old guitar player Avi Ludmer played a great rhythm guitar alongside Marino and also picked up the electric violin to provide an interesting counter point on some of the jams.  The rhythm section drums and bass were incredibly tight and kept up through all the various changes during the set from classic rock and roll, blues, progressive fusion, and some pretty freaky eastern sounding tones.  It was really a mix of styles.  And while I didn't care for some of the the eastern sounds (too atonal for me) it's still pretty impressive to see and hear that sound come out of an electric guitar.  Also, there was a cool sixties vintage old-school psychadelic light show.

The only negative vibe was the road crew seemed pretty nervous about anyone shooting video and threatened to confiscate cameras.  Which is  a shame, because I think it would open more people's eyes and ears to Marino's unique style.  But if that's what the boss man wants, I respect it.

Here are some more photos from the show available on PicasaWeb.

If you remember Frank Marino from the old days or if you want to one of the great all-time top guitar players this is a great opportunity.  The current tour takes Marino and his band across the US to Chicago,Vegas, Santa Ana, Phoenix, Austin, Dallas, Annapolis, Nasheville, Atlanta and beyond.

favorited this one, bro