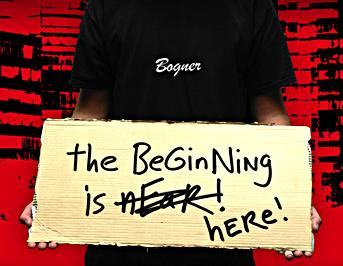 In what was either the music industry's worst kept secret or Line 6's best buzz marketing campaign, a new amp has been in the works that combines the world-famous modelling of Line 6 with the acclaimed tube sound from boutique supplier Bogner Amplification.  The end result is a new "Spider Valve" amp that appears to have had input from Dave Mustaine of Megadeth and combines the best of both worlds to produce a new line up of amps with a range of prices.  This would fit in well with Line 6's overall strategy to use new technology to disrupt the larger vendors, as they've done with their modelling effects, amps and guitars in the past.

Reinhold Bogner began doing custom amplifier work in Germany and then in LA in the late 1980s for clients such as Allan Holdsworth, Eddie Van Halen and Steve Vai. While Bogner is not as famous a name as Marshall in the world of amps, the company has a devoted base of users, ranging from metal bands like Slipknot, Alice in Chains, Megadeth to a set of mainstream rock bands like Steve Miller, Velvet Revolver and Dave Navarro. Line 6 has been dropping a series of clues over the last few weeks ranging from the first "BeGinNing is nEaR" cryptic message on their home page, to subtle clues on MySpace and and now more clear indicators on Flickr and YouTube.  The YouTube video doesn't quite spill all the beans (they never actually show the new amp) but they let you hear it as well as the reaction to industry insiders who were briefed on the new amp behind closed doors at Summer NAMM in Austin in July.

Guitarist magazine in the UK broke the story last week and there are now pictures of the new amp showing up on Vettaville.nl along with information on a new rumored Pod X3. In the meantime, you can get pretty good deals on Spider III Amps

and the low end Variax 300 Guitars

as Line 6 appears to be clearing out a lot of existing inventory. 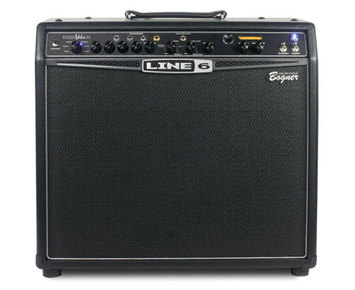 There's been plenty of discussion over on the Line 6 forums as well as elsewhere. Watch for more details in the coming weeks.

Update:
Line 6 today made the formal announcement of the Spider Valve amp.  Details are available on the Line 6 web site.  There's also some new videos and an FAQ.  Prices start at just under $700 for the 112 model with 40 watts and a 12" Celestion Vintage 30 speaker.  The amps will be available starting in October. 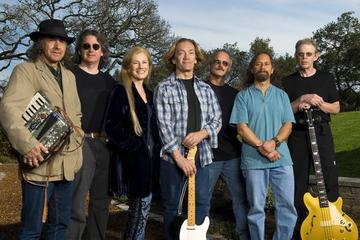 Roger McNamee's long running Bay area jam band Flying Other Brothers has gradually morphed into a slightly streamlined Moonalice. The band includes Roger's wife Ann sharing vocals and song-writing as well as fromer SNL band leader and G.E. Smith on guitar, Barry Sless on guitar and pedal steel, Pete Sears on keyboards, Jimmy Sanchez on drums and Jack Casady on bass.  These are top-talent musicians who have played with the likes of Jefferson Starship, Hot Tuna, Phil Lesh, Bob Weir, Mickey Hart, Boz Scaggs, Rod Stewart, Hall & Oates among others.  And all of them want to play bass.

You can download or stream several of their songs from their forthcoming T Bone Burnett produced album free from their web site.  It's still "fookin' hippie music" according to Bono, but they have a good time, and you will too.  The video below is a bit goofy, but the music is good.

The band has a number of bay area gigs including Santa Cruz friday August 28 at Moe's Alley, September 1 in Sausalito and Tahoe City on September 2nd.  Later in September and October there are more dates in Denver, Portland, Seattle, Denver, Chicago, Columbus, New Jersey and Annapolis. 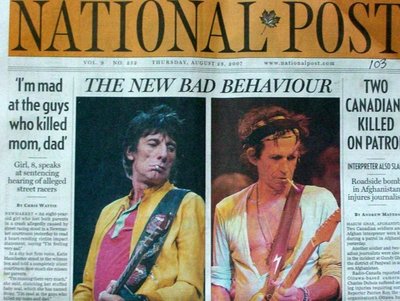 Looks like there wasn't much going on in the news in Canada when the National Post ran this story on its front page.  It seems that Keith Richards and Ron Wood smoking at a gig in London somehow irked the Canadian sentiment.  Geez.

If I'm not jealous, maybe I should be.  I got an email from Robert Renman introducing me to his guitar site www.Dolphinstreet.com and forums www.thefret.net.  Ok, I understand that other people have far more musical ability than I do.  I'm somewhere between beginner and intermediate level struggling to get my way through scales and theory and all that.  And obviously, guys like Robert have far more talent which is why he can create great lessons on the web.  And naturally Robert has a pretty impressive collection of guitars. And amps. And effects.  I can understand all of that.  But darnit, he's a also sub three-hour marathon runner!  And I don't mean 2:59; his best time is 2:37.  That is a world class!

If you're not jealous, then I encourage you to check out Robert's online guitar lessons. They're free, professionally made and they cover a range of styles including blues, country, jazz as well as licks, scales, chords, techniques and popular songs.  The videos are put together in an easy-going friendly style where Robert shows a particular technique at full speed and then dissects it into smaller pieces at slower speeds telling you how to do it step by step.

You'll want to have your guitar ready in hand and likely view lessons a few times while practicing to make sure you fully absorb the information.  The only thing that might make these lessons more accessible is if you could also get the songs and riffs in Guitar Pro format so you could have an easy reference.  But even without this, they're still useful as heck.  And you can't argue with the price: all of the online lessons are free.  If you want to get them offline, you can buy a DVD with 22 of the lessons for a mere $23 USD.  Quite a bargain.

Also be sure to check out Robert's blog.  You can also sign up to be notified of new lessons. And if you're a runner like me, tap into Robert's marathon training tips.

Although I've only heard about them recently, San Jose's Syndicate of Sound was one of the earliest garage bands from the 1960s.  They toured with The Yardbirds, The Rascals, The Animals, Sam the Sham and even opened locally for the Rolling Stones.  Their 1966 hit single "Little Girl" has its supposed millionth on air playing on local San Jose radio station KFox Tuesday August 14 on the Greg Kihn morning show.

Although they disbanded in 1970, they were inducted into the Rock and Roll Hall of Fame in 1996 and still do occasional gigs including tonight's show at The Bank Club.  Their album Little Girl was reissued on Sundazed in 1997 and is available at Amazon.com.

The eighteenth annual San Jose Jazz festival kicks off this weekend with an expanded format.  The shows start Friday evening, covers over 100 acts on ten stages and will continue until the late hours through Saturday and Sunday with additional club venues through the city.

While I'm not a jazz fanatic by any means, the program has enough variety to keep it interesting.  There's classic old school jazz, R&B, Salsa, Latin and Blues also.  For a mere $5 a day you have unlimited access to all shows on all stages.  Seems like a pretty good deal to me.   I'll be heading over Sunday afternoon to catch the Blues Guitar Extravaganza. 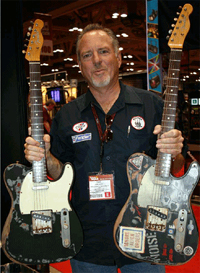 At the Summer NAMM show, Fender announced a new Joe Strummer Telecaster.  It's a "pre-distressed" (e.g. beat up) guitar based on Strummer's '66 model with worn-down-to-the-wood black spray paint finish and two single coil pickups.  It comes with a stencil kit and stickers for just under $1300.

The Tele was a hit with many of the emerging punk bands from the 80's ranging from The Police to The Stranglers, but for many The Clash were the quintessential rockers and Strummer their leader.  He was no guitar virtuoso (hence the stage name) but he more than made up for it in his enthusiasm and energy.  So it is a little ironic that Fender decided to commemorate Strummer with his own axe.   Unfortunately, Strummer died at the age of 50 in 2002, just months before the band was inducted into the Rock and Roll Hall of Fame.  Who knows what he would have thought of a signature guitar?  He might have told Fender to pound sand and offered to beat up someone's guitar for half what Fender is charging.  After all, he only paid £120 for the guitar in 1975!  Still, it's a well-deserved tribute to the man.

If you don't have it already, this is a good time to pick up a copy of London Calling, their celebrated double album from 1979, and in many ways, the apex of their career.  Can it be so long ago?