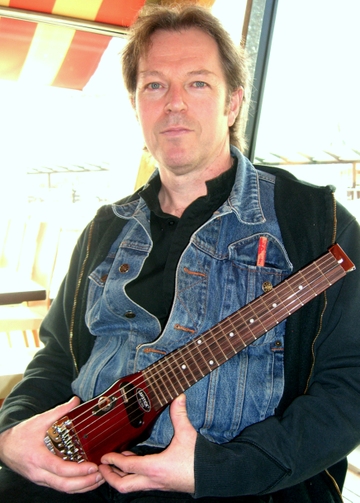 A few months back, I took a look at the Lapstick, which I called the ultimate travel guitar.  In Amsterdam, I spent several jet-lagged hours speaking with Phil Neal (above), the mad Dutch designer (by way of Canada) behind the Lapstick.  We talked about his background, his inspiration and what drove him to build an electric guitar that packs so much sound into  20 inches and weighing in at just over a pound.  After much delay, here is my "six pack" of interview questions with Phil.

If you're looking for a guitar that will challenge your playing and get you more practice hours while on the road, check out the Lapstick.  It's not for everyone, but it's a definitely a one of-a-kind electric guitar from a one-of-a-kind designer.  Phil has also created a number of custom modifications for customers including a Lapstick-style bass, humbucker-equipped Lapsticks and so on.

Q: How did you get started with the Lapstick?

Phil: When I turned pro, I had less time to practice.  It's the old cliche.  The pros never have time to practice and can't afford the best gear, either.  You're so busy on the phone getting gigs and travelling.  And if you don't work on technique, it rusts on you.  The guitar is a bitch of an instrument!  You need to practice all the time, two, three hours a day.

Back in 1992, I was travelling to Spain a lot and I had a lot of downtime getting to and from gigs.  There was nothing in the market to do what I wanted.  So I took the elements I liked from a Telecaster and cut away everything I didn't need.  There's lots of wasted space on a standard electric guitar.

The first version had a conventional headstock, but the machine heads got knocked out of tune all the time.  It was an octave higher and not a lot of fun to play.  So then I eliminated the headstock.  That got me another four more frets to work with.

I've continued to refine it so that there's no wasted space.  Sometimes I have to give a milimeter here or there, but I'm tough on myself.   I've toyed with the idea of adding a couple of extra inches.  But if you go to full scale, you can't play in a car!  I measured the space and you have just half a meter to work with in a car seat.  In some sense, I failed since the Lapstick is actually 51 centimeters long.

Q: How do you think the Lapstick compares to other travel guitars?

Phil: I approached things from a different point of view.  If I'm arrogant, I would say that the Lapstick is the only travel guitar.  It's not just a portable guitar.  I wanted something I could actually play on a train, in a plane, in the backseat of a car. The dutch trains are quite compact and I didn't want to be bumping into the passenger next to me!

I also wanted something that would make me a better player. When you're in the waiting lounge for a flight, you can strap on headphones and start playing.  With the Lapstick I improved my playing style.  I started venturing into the higher frets.  I did a few gigs after playing the Lapstick and the guys were like "Phil, you were on fire tonight!  What happened?"   And it's because the Lapstick made me more confident and precise in my playing.

Q: Tell me about the hardware you chose.

Phil: The hardware is custom made from a firm in Germany and it's top of the line.  It has an EMG Select humbucker pickup.  A single coil would give you too much interference. It has a tiny pre-amp housed in the back.  Everyone told me you couldn't get a pre-amp into a guitar. But I made it work. It's got built-in clean, distortion and overdrive settings and runs on a standard 9V battery for around 60 hours.  So you can just plug in a pair of headphones directly. And it's got a regular 1/8 inch jack for plugging into a standard amp which requires no battery power. The Select is a very quiet pickup, it's perfect for this type of guitar.  It's also used on the Steinberger.  I'm a great fan of Ned Steinberger, Steve Klein.  I met Steve Klein and I can't praise him enough.  I played one of his acoustics. It was an unbelievable instrument.  Steinberger's also great if you want something that's full scale but still somewhat portable.

Q: What music most interests you these days?

Phil: My great love is blues and R&B.  I play some jazz. I listen to a lot of Miles Davis. I love classical music.  You can play Bach on a Lapstick.  No one said it would be easy.  It's work.  But when you go back to a full scale guitar, then it's easy.  Things you fight for and struggle with on the Lapstick then become much easier on a regular guitar.

I have a band is called Phil James and the Flames and we do a few gigs a month. When I was in bands, I got tired of having guys not show up to gigs, so I figured I may as well be in charge.  My son has been to a few gigs and that's a lot of fun for both of us.

Q. How did you start selling the Lapstick?

Initially I sold through a few shops, like Andy's on Denmark Street in London.  I had worked there as a guitar tech in the late 70's and 80s.  That was a crazy time.  Andy's was a who's who of the guitar industry.  I remember one time Steve Jones from the Sex Pistols came in and sold his Fender Twin reverb amp.  But then their manager came in later and wanted it back!  But selling through retail is a tough business, even for a shop like Andy's.  (Note: Andy's has since closed.)

Mostly now sales are online over the web. It's amazing that you can build a business like this on the Internet.  The first Lapstick I sold online went to a guy in Moscow.  It was on September 7, my birthday, which I took as a good omen.  He had a lot of faith to send the money just reading about it on the Internet!  But he's a crazy guy.  He tuned it to E, which I thought couldn't be done.  Most people tune it to A, some to G.  You could put a set of 9 strings on it and tune it to B if you wanted.  The tension on the strings has to feel right.

Nowadays, most of the Lapsticks ship to the US, but I have a surprising number of customers from the UK. 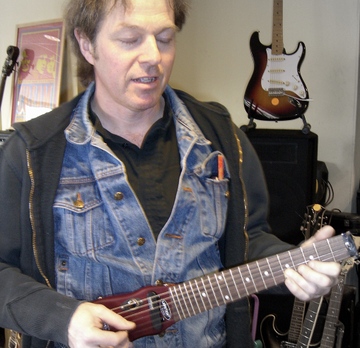 Q: Who is a typical Lapstick customer?

Phil: I thought originally the Lapstick would appeal to pro musicians who travel a lot, since that's where I was coming from.  That's about half of the sales.  The other half is from inventive musicians who use it on stage.  I'm not sure I would use it for a live gig.  With the Lapstick, there's nothing to hide behind!  You're really exposed on stage!  The other class of users are beginners.  It's good for kids.  It teaches you to be more precise.  Some folks use it and don't want to go back to a regular guitar.

The Lapstick is like having a kid.  It starts with a night of passion and it takes on a life of its own.  I strarted making two or three and now have built over a hundred.  As a builder, you never know what people will do with an instrument.  I see people out gigging with it, which is something I would probably never do.  But that's the cool thing about it.  It's a little different at first, but everyone who has bought one has gotten used to it and become a better player.  People tell me they have a lot of fun with it.  So to me the project has been a success.

You can find more information about the Lapstick at www.lapstick.com.  There's also a new online forums and videos on YouTube that give you a feel for what it's like to play the Lapstick.  Also, look for new announcements from Phil later this year.

I work on the river - I need one of these guitars!!!

Hey, it's a guitar not a paddle! But they are pretty compact and cool. And surprisingly good design and materials.

if you play guitar you need one of these in your collection otherwise you will never know the possibilities that can be had in times when you have to do without your full size usual guitar. no doubts, oder yours now.... ( ;