Roger Waters Dark Side of the Moon 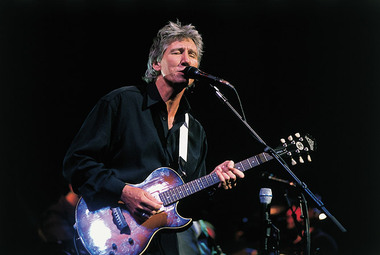 Following on last week's Police gig in Oakland, I went to see Roger Waters perform Dark Side of the Moon, one of the top 5 best performing rock albums at all time, at the samller adjacent Oracle Stadium basketball arena.

Waters, as most readers probably know, is the bass player, lyricist and writer of much of Pink Floyd's master works.  While Waters' dark vision and relentless ego created a lot of infighting in Pink Floyd, ending with a nearly unreconciliable split in the 1980's, the band re-formed the original line-up with David Gilmour, Nick Mason and Richard Wright at last year's Live 8 concert.  And at 64, Waters continues to put out occasional albums, write new songs and perform much of the classic Pink Floyd catalog.  And I admit, as a guitar player, if I had to chose sides, I am more of a David Gilmour fan.

Nonetheless, I managed to score a seat for the concert just 2 days before hand on www.craigslist.org for less than face value.  And I'm glad I did.

For anyone who did not get a chance to see Pink Floyd's Pulse tour from 1994 this is as close as you can get to seeing a classic Floyd concert, or at least a reasonable facsimile.  Waters' has mellowed somewhat over the years and it's great to see him performing and enjoying his work at the age of 64.  Indeed, he looks as fit and trim as a man twenty year's younger.  I hope I can be enjoying my work as much as him when I'm 60.

The show is divided into three parts: an opening set of songs culled from Pink Floyd songs and some Roger Waters solo songs, then following a brief intermission, Dark Side of the Moon in its entirety; and finally an encore of even more Pink Floyd.

Waters has put together a fantastic band and some impressive videos, lasers, pyrotechnics, a floating pig and other 80's era visuals recalling old school rock concerts of years gone by.  (And to be honest, I think there was more marijuana in the air at this show than I've ever witnessed.  That and garlic fries, but I'm not sure of the causal relationship there.)

The music was precise and polished.  While I don't care for some of Water's solo material (Leaving Beirut is worse than boring -- it is a sonic mismatch of 50's style rock with anti-Bush screed) Waters has an amazing back catalog to draw from.  The set included Wish You Were Here, Have a Cigar, Sheep and Another Brick in the Wall among others.

The rendition of Dark Side of the Moon was superb, note perfect, including the wailing vocals on Great Gig in the Sky.  And if there was any criticism, it's that it is too perfect.  It comes across as an homage to the band that isn't there with no room for improvisation or experimentation.  The guitarist, David Kilminster, did a great job, but let's face it, with anyone other than David Gilmour playing the solo on Money they're just a glorified cover band.  And while the band has good vocals all round, it's just not the same.

Still, it was a good show, even if it's too perfect, and it's as close as we're likely to get to a Pink Floyd show anytime soon.  Check out the tour dates through the US this summer. Also check out clips on YouTube.

Hey, I recently added a news widget from http://www.widgetmate.com to my blog. It shows the latest news, and just took a copy and paste to implement. Might interest you too.

Thanks for your spam, dude. What does this have to do with music?
--Zack