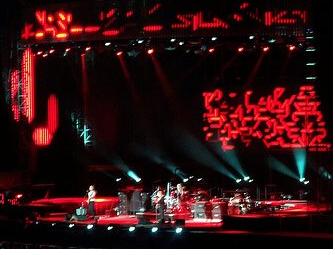 Okay so maybe the most widely anticipated reunion concert of the summer didn't live up to its massive expectations.    But The Police did put on a pretty decent show at Oakland Coliseum the other night to a packed crowd of 45,000 some fans.  My friend Steve rated it a solid B, which I think is pretty fair. It was a very big venue --may be too big --and this was still one of the earlier gigs on the tour.  So perhaps things will  evolve as they get more experience under their belt and get used to playing very large crowds again.

There was excitement in the air as they started the opening chords to message in a bottle.  Unfortunately a lot of the electricity got dispersed immediately as the sound was pretty lousy at first.  And frankly the song was played a little bit down tempo and lacking in energy.  To me the first part of the show was somewhat hit or miss.  There were slightly changed arrangements of songs, reworkings of  tunes and key changes.  Maybe this was just to make it easier for Sting's aging vocal cords to stay within range, I don't know.  But the newer arrangements weren't any better than the old ones.  In fact, they were worse.

It wasn't until they got back to some of the earlier material in its original form that you started to feel the energy and excitement of what made The Police great.  That said, Sting's vocals were strong, his bass playing was precise , Andy Summer's guitar work was top-notch and Stewart Copeland's drumming was superb. But it was only Copeland who seemed to be really enjoying himself onstage.  I think it was 60 minutes into the show before I saw Sting lighten up.  And I'm not sure I've ever seen Andy Summers smile, maybe he's just too focused on filling in all the guitar pieces. He cut loose with some great solos and a lot of energy but boy does he look serious.

The set included most of the classic songs you would expect, including Can't Stand Losing You, Every Breath You Take, King of Pain, De Do Do Do, De Da Da Da, Walking on the Moon, Driven to Tears, Invisible Sun, Wrapped Around Your Finger and others.  For me, the highlights were the songs from the first two albums including The Beds Too Big Without You, So Lonely, Roxanne and the finale, a frenzied version of Next to You that bordered on chaotic.  That took me back 26 years ago when I saw the police in Montreal at McGill University.  I just wish more of the show had the energy and raw power they showed on the ending numbers.